Italy has its own category of protection for some failed asylum seekers, but the government has recently legislated against this. Thousands of protesters have hit the streets to defend refugee rights. 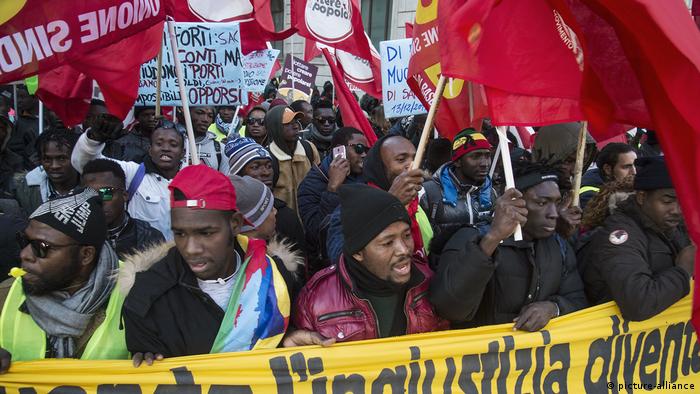 Italy's new government has pursued a hard-line position on migrants, having shouldered a large burden during the influx of refugees. Most recently, leader of the far-right League Party and Deputy Prime Minister of Italy Matteo Salvini spearheaded a move to tighten asylum laws.

The so-called Salvini decree strips humanitarian protection for migrants not approved for refugee status but who cannot be deported.

Another level of protection

About 25 percent of asylum seekers have two-year humanitarian protection permits, allowing them to live in state-run reception centers and access training and educational programs and find work. The lower level of protection is based on Italian, rather than international law and protects people who fail to meet the threshold for full refugee status.

The decree does still allow for certain migrants to obtain "special" residency permits if they have serious health conditions, are victims of domestic violence, work exploitation or sex trafficking, and those who have escaped from a natural calamity in their home countries or those who have carried out heroic acts in Italy.

The decree also introduces a new procedure to fast-track the expulsion of "dangerous" asylum seekers.

Critics say the law will leave thousands of migrants homeless after they are thrown out of state-funded reception centers.

Protesters on Saturday donned French-style yellow vests and were organized by the USB union and the far-left Potere al Popolo (Power to the People) party. They chanted slogans slogans such as "Stop Racism" and "No Salvini."

The new law would "only increase the number of people without papers in Italy and force people underground," protester Kone Brahima, originally from Ivory Coast, told AFP news agency.

Project Rights, a collective bringing together various human rights groups, said in a statement: "First of all, we started two years ago criminalizing those who save thousands of lives at sea" and ended up "closing ports to boats loaded with survivors."

"Today with the Salvini decree, we have abolished humanitarian protection, creating an endless stream of people forced into hiding," it said in a statement.

The Italian Refugee Council has said it was "seriously concerned" by the new law.