A "new European Spring" to replace the "French-German axis" has been coined by Italy's interior minister Matteo Salvini while visiting Polish populists. His foray precedes the EU's parliamentary election in May. 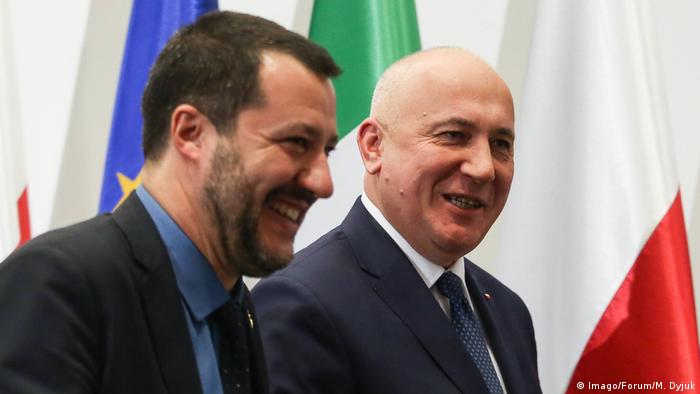 Euroskeptic Salvini vowed Wednesday to create a "new equilibrium," with Italy and Poland as the "protagonists" of a "new European Spring" based on "true Christian values" via a 10-point program that had still not been fully defined.

Salvini's "spring" terminology was reminiscent of 2010, when the Arab Spring began in Tunisia and spread during 2011 to Libya, Egypt, Yemen, Syria and Bahrain, often ending in repressive regimes and brutal warfare.

Instead, Poland and Italy "wanted to have influence on what our common, European home is going to look like," said Brudzinsk of Poland's populist Law and Order (PIS) party.

Salvini's visit coincided Wednesday with a German cabinet decision that Chancellor Angela Merkel would sign an agreement with French President Emmanuel Macron on 22 January to deepen the Elysee Treaty.

That 1963 accord sealed the neighbors' post-World War Two reconciliation.

Macron's office said Wednesday the intended signing, in the German border city of Aachen, would be a framework for a "more sovereign, united and democratic Europe."

Arriving in Warsaw Wednesday, Salvini said that, from June, Europe would have a "different pace compared to the one of today, which is guided by bureaucrats" and asserted that some in Brussels denied Europe's "Judeo-Christian origins."

"This is a historic chance," Salvini told reporters during a press conference at the Italian Embassy in Warsaw,

Polish Prime Minister Mateusz Morawiecki said after talks with Salvini that his government was on the "same page" in accusing Brussels of discriminating with EU nations over budget stringency. Two weeks ago, Italy reached a budget compromise with the European Commission.

After talks with influential PIS party leader Jaroslaw Kaczynski, Salvini said he wanted to put together an alliance of like-minded EU parties.

Kaczynski's spokeswoman Beate Mazurek posted a photo of the two men with their delegations, saying their talks were "full of common understandings," but added that, on some issues, the two sides had differed.

Poland's main opposition leader Grzegorz Schetnyna of the centrist Civic Platform described the meeting between Salvini and Kaczynski as "absurd and shocking."

Already, Salvini, who served as a European parliamentarian between 2014 and March 2018, has sought alliances with Marine Le Pen's far-right National Rally in France and the anti-Islam Freedom Party in the Netherlands.

A stumbling block for Salvini could be Polish skepticism about his overtures since 2014 to Russian President Vladimir Putin and Le Pen's loans from a Russian bank seen as making her beholden to Moscow.

Poland ruling party has recently tried to mend fences with Brussels by agreeing to reverse a law that would have forced Polish Supreme Court judges into early retirement.