Interior Minister Matteo Salvini insists Italian ports "are closed" after the latest docking request by a Spanish migrant rescue ship. The Madrid government later gave permission for the migrants to disembark in Spain. 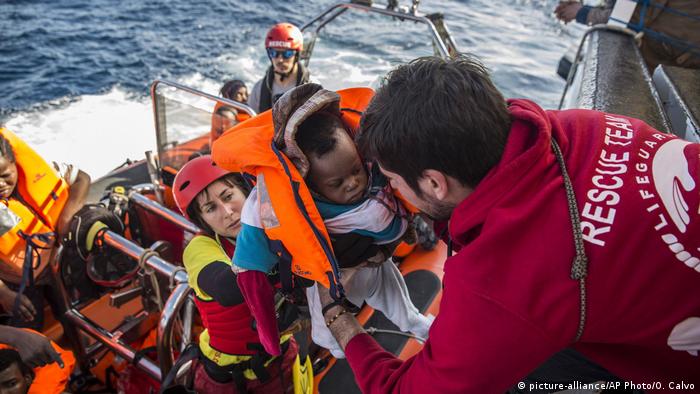 Italy again played hardball with a migrant rescue charity on Saturday after the country was implored to allow a ship carrying more than 300 rescued migrants to disembark.

Far-right Interior Minister Matteo Salvini rejected the request, saying in a tweet: "My answer is clear: Italian ports are closed!"

"For the traffickers of human beings and for those who help them, the fun is over," Salvini added, referring to his previous claim that some migrant rescue ships have become a taxi service for migrants.

Rescued but in limbo

The Spanish group Proactiva Open Arms said that it had picked up 311 migrants — including children and pregnant women — from vessels in difficulty in the Mediterranean on Friday, and that a mother and newborn baby had been evacuated to Malta.

In a tweet, it said the situation was becoming "an emergency," adding that Malta had rejected calls to supply food to the migrants.

Within a few hours of Italy's rejection, Spain's government gave authorization for the rescue ship to dock at the southern Spanish port of Algeciras.

Although the number of migrants crossing from Libya to Italy has fallen sharply since its peak last year, this part of the Mediterranean has been the deadliest for those attempting to make it to Europe.

More than 1,300 migrants have perished trying to reach Italy or Malta since the beginning of the year, according to the International Organization for Migration.

Italy's populist government, however, was elected in May on a promise to take a more hard-line approach to the migrant crisis, and Salvini, in particular, has been outspoken about his unwillingness to host rescue vessels.

Earlier this year, Italy and Malta refused permission for the Aquarius rescue boat run by Doctors Without Borders to dock at any of its ports, and the migrants eventually disembarked in Spain, having spent several days at sea.

Migrant rescue groups have repeatedly rejected accusations of collusion with people traffickers in Libya, insisting that their work is purely humanitarian.

Read more: Migrants refuse to disembark in Libya after being rescued at sea

Despite obstruction by some European countries, several charities, including Germany's Sea-Eye, are still operating in the Mediterranean.

One of Sea-Eye's rescue ships set off from the southern Spanish port of Algeciras earlier this week, as the narrow stretch of water between Morocco and Spain has increasingly become the preferred route for migrant crossings.