Migrants refuse to disembark in Libya after being rescued at sea

The 94 passengers were rescued by a passing container ship last week as they were en route to Italy. After being returned to Libya they have refused to get off the ship. 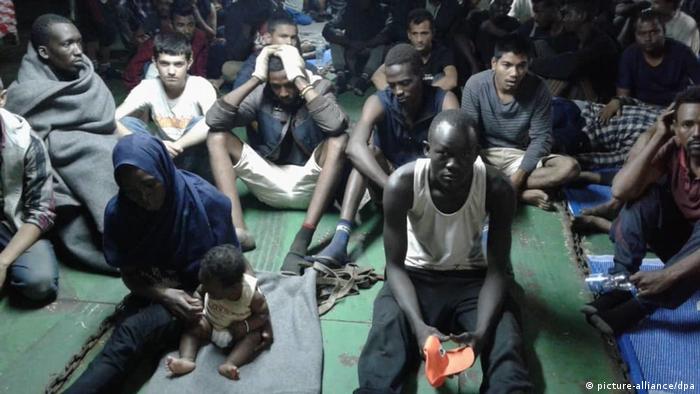 The Libyan coast guard reported Wednesday that migrant passengers aboard a container ship docked at the port of Misrata are refusing to disembark.

The migrants, who are from Eritrea, Somalia, Bangladesh and Sudan, were rescued last week when their vessel began sinking en route to Italy. The vessel was too far from Libya for the coast guard to rescue, so authorities asked a container ship sailing in the opposite direction to pick them up.

That ship has now docked at its intended destination but officials say: "When we asked the migrants to get off the ship, they refused and demanded it take them to Italy."

A 19-year-old Sudanese migrant from Darfur said: "I was stopped by this ship and thought I would be sent to Malta or Italy. I prefer to die but not to be returned to Libya … it's a prison."

Some of those on board were willing to get off the ship, but had been prevented from doing so by others. Coast guard officials say that they are currently in the process of getting those who want to leave off the ship. So far, 14 people have disembarked. There are a number of women and children among the passengers.

Passengers are currently being attended to by human rights and medical experts. Julien Raikman of Doctors Without Borders (MSF), an NGO, says that Libyan authorities have allowed the group to treat those in need of urgent medical care as well as deliver food.

He urged a peaceful solution to the situation and suggested offering alternatives to the migrants: "We talked to people who have suffered torture on the migration route and it seems abnormal that the United Nations cannot propose an alternative for them."

Take them back to Libya

A number of Europe-bound vessels carrying hundreds of passengers have been intercepted by Libya's EU-backed coast guard of late. Migrants are taken back to Libya where they are screened by UN agencies and then taken to government-affiliated detention centers. The notoriously poor conditions at those camps have been harshly criticized by human rights groups.

European countries have been seeking a solution to keep migrants from coming to the continent via Libya — which has become a launching point for such journeys — but have failed to come to an agreement as to how to achieve that goal. Italy, which is often the destination of vessels sailing from Libya, has been especially vocal about the need to stop migration.

Thousands of people have drowned in the Mediterranean since the European migrant crisis began in 2015; more than 1,000 have drowned in its waters in the first six months of 2018 alone.