Thousands of African migrants trying to get to Europe end up trapped in Libya. Often they endure abuse, and some are even sold into slavery. DW's Migration Dilemma series looks at why people risk the journey. 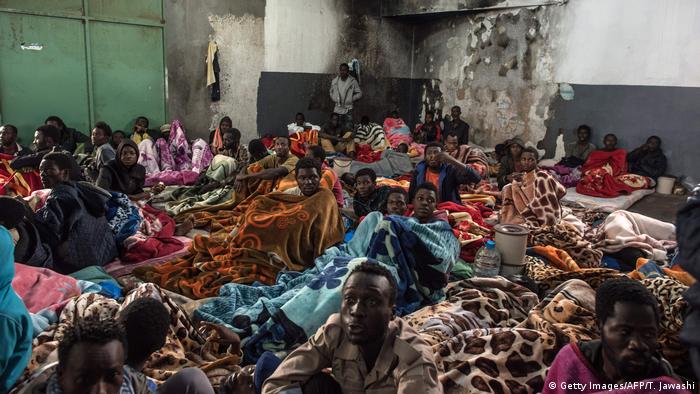 Enoch Yeboah left his home in Ghana in 2013 and headed to Libya with the hope of crossing the Mediterranean Sea to Europe. But his dream of starting a new life ended soon after setting off.

He traveled north by bus to Niger where he found a middleman who offered to help him.

"The man charged me 200,000 CFA francs, so I paid the money and we (crossed) the desert to Libya," the 27-year-old recalls. "We were treated like animals, no respect for human rights. We were just like animals to them."

Yeboah says he spent three years suffering under harsh conditions in Libya until he was finally rescued and brought back to Ghana.

He was one of around 300 young people at a panel discussion this week hosted by DW and local partner Joy FM in Ghana's capital, Accra. The initiative, part of the Migration Dilemma series, aims to foster debate about why so many young Africans want to leave their countries, and what can be done to make them stay.

Yeboah told the audience that some of his friends had been "slaughtered like animals" in Libya, and urged other young people considering traveling to Europe without papers to stay put.

Unfortunately, his story is not unique. At a summit of European Union and African leaders in Abidjan, Ivory Coast, this week, a top African Union official said there could be as many as 700,000 Africans stranded in Libya, where many have been through horrific ordeals and even sold into slavery.

Just this week, over 160 Ghanaians were repatriated from detention camps in Libya. Many of them said they were sold into Libya's slavery market.

Gambia's youth between hope and frustration

The reports of migrants being auctioned off to the slave trade dominated discussion at the Accra panel event. But many young audience members also wanted to talk about what they described as a lack of opportunity in their home countries, saying the situation was driving people to leave.

"When you work more and earn less, sometimes you suffocate," one participant, Yunis Sola, said. "You feel like moving because if… I can work for one hour somewhere else and get more dollars, that perception will push me to go out there."

Joseph Teye, a migration expert at the University of Ghana's Center for Migration Studies, said the reasons behind young people's desire to make the illegal sea journey were numerous and complex.

"The root causes are many — the poverty, misconception, policy and institutional problems… and also the strict visa regimes of developed countries are among some of the causes," he said, adding that developed countries could help by "opening their doors more to regulated migration."

"Migration is not bad. We see it as something good, but it has to be managed," he said.

The Migration Dilemma: Despair in Senegal

The International Organization for Migration (IOM) has pointed out that there's a need for greater awareness among young people in countries like Ghana about how treacherous the journey to Europe via North Africa can be.

"There is no campaign, there is no television advert…to tell people how dangerous it is," said Eric Opoku Ware, who also traveled through the Sahara to Libya. "When I was going there was no news."

Ghanaian Information Minister Mustapha Hamid acknowledged that the government has a big responsibility to change this, and to give the country's youth a reason to stay.

"Above all, we have to rebuild our education system so that everyone can at least have a secondary school diploma," he told the audience. "Children would be better educated and better equipped with the relevant tools to stay in our country." 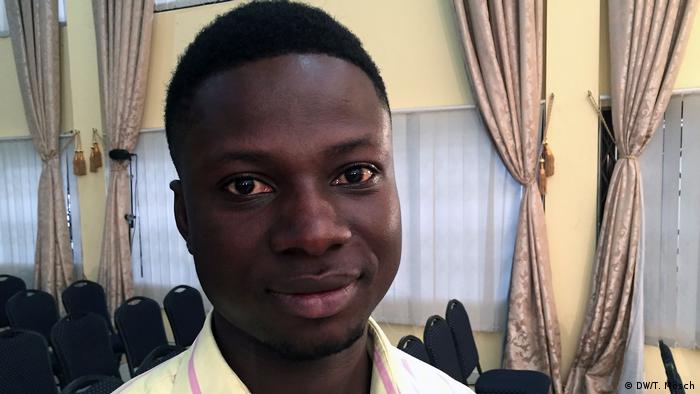 Enoch Yeboah is one of the lucky few migrants who returned alive. Many died in Libya's detention centers

But Enoch Yeboah is sick of hearing promises from the government. Now back home in Ghana to start over, he wants to see concrete action.

"The government should just create job opportunities for and just employ the youth," he says. "Because if (I'd had a job) that time… I wouldn't have even traveled. I was traveling to go and get money to come and start my own business, to start doing something."

The Migration Dilemma, a DW multimedia project, is funded by Germany's Foreign Ministry. It focuses on the West African countries that send the largest number of people to Europe in search of better opportunities: Gambia, Nigeria, Ghana, Guinea and Ivory Coast.

The Migration Dilemma: Stay or leave

With fewer people leaving Senegal by sea and an increasing number of migrants returning, the question now is whether staying at home is a viable alternative. (09.12.2016)

Tempted by the notion of 'easy migration' spread online and on television, many Senegalese are still attempting the perilous trip to Europe. (05.12.2016)

The bittersweet reality of intra-African migration 17.12.2021

Africans are getting around their continent in ever greater numbers these days. But the poor treatment many receive in some countries casts a shadow over the prospects for integration.