The UN Security Council has placed a global asset freeze and travel ban on the smugglers and traffickers. The Council said Libya's authorities were in favor of the sanctions and want more names added to the list. 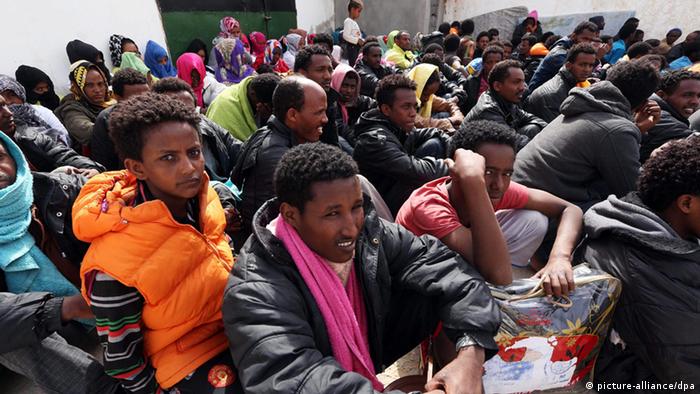 The United Nations Security Council on Thursday sanctioned six people over human trafficking and smuggling of migrants in Libya.

The move came after Russia lifted a hold it had set on the request for action against the individuals.

Human trafficking in Libya was brought to the forefront last year when footage broadcast on CNN appeared to show African migrants in Libya being auctioned off as slaves for as little as $400 (€340).

The Netherlands, backed by France, Germany, Britain and the United States, asked the 15-member council's Libya sanctions committee to place a global asset freeze and travel ban on the six people last month.

In a statement, the Netherlands said Libya's authorities were also in favor of the sanctions and would like to see more names added to the list.

Under the UN sanctions regime set up in 2011, the committee has the power to sanction people involved in the "commission of serious human rights abuses against persons in Libya."

"Last fall, images of migrants being sold as slaves in Libya shocked our conscience, and the Security Council vowed to take action. Today's sanctions send a strong message that the international community is united in seeking accountability for perpetrators of human trafficking and smuggling," said US Ambassador to the UN Nikki Haley in a statement.

People smugglers in Libya have sent hundreds of thousands of migrants by sea to Europe, mainly Italy, since 2014. Thousands have died during the voyages.

There were three survivors when a smuggler's boat carrying over 90 people capsized off the coast of Libya. More than 6,600 migrants and refugees have entered Europe by sea in 2018, according to the IOM. (02.02.2018)

A boat was carrying at least 100 Ethiopian migrants when it capsized off Yemen in rough seas. Thousands make the life-threatening journey every month, according to the UN's migration agency. (07.06.2018)