German Interior Minister Seehofer has urged his Italian counterpart Salvini to open ports to boats carrying rescued migrants. A rescue boat docked without permission in Lampedusa and another is headed to Malta. 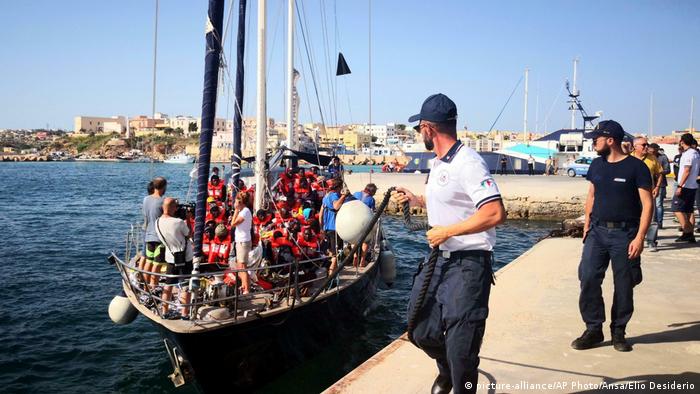 In a letter to Italy's far-right interior minister, Matteo Salvini, Seehofer said the situation as it stood — with boats often at sea for weeks before they are allowed to dock — was untenable.

Since Italy elected a populist coalition in 2018, Salvini has effectively closed the country's ports to rescue ships, meaning boats have had to stay at sea for extended periods.

"We cannot be responsible for ships with rescued people aboard being adrift for weeks on the Mediterranean," Seehofer wrote, adding that European solutions based on joint responsibility were needed rapidly.

"I therefore strongly appeal to you to reconsider your position of not being prepared to open the Italian ports," Seehofer said.

Seehofer had earlier tweeted that Germany was ready to accept some of the rescued migrants arriving in Italy "as part of a European solidarity solution."

However, Salvini — who claims the rescue ships are assisting people trafficking — was quick to dismiss Seehofer's request and said Germany should take action against German-flagged rescue ships and their crews.

"The German government is asking me to open Italian ports to the ships. Absolutely not," he said in a series of tweets. "We demand that Merkel's government revoke the German flag from ships that help people traffickers and smugglers, and repatriate its citizens who disobey Italian law."

Meanwhile, a rescue vessel brought 41 migrants into port at Lampedusa without the permission of Italian authorities.

The Italian-flagged Alex is operated by the migrant rescue charity Mediterranea, which said conditions aboard the sailboat had become intolerable.

"The Alex sailboat of Mediterranea Saving Humans has just docked at the port of Lampedusa," Mediterranea tweeted. There are no closed ports for humanity."

The Alex is the second NGO vessel to land at Lampedusa in just over a week after Sea-Watch 3 captain Carola Rackete was arrested for forcefully docking her ship there.

Malta and Italy reportedly reached a deal on Friday to each take refugees from the Alex.

The German NGO Sea-Eye on Saturday said one of its vessels, the Alan Kurdi, had been refused the right to dock at Lampedusa and would sail on to Malta, adding that it would not wait for an emergency off the Italian island's coast and that "human lives are not a bargaining chip."

Last month, Salvini issued a decree introducing fines of up to 50,000 euros ($57,000) for the captain, owner and operator of vessels "entering Italian territorial waters without authorization."

The arrest of the "Sea-Watch 3" captain raises the question of who stands to benefit from such acts of protest. Ultimately, it may play into the hands of Italy's Interior Minister Matteo Salvini, writes Bernd Riegert. (01.07.2019)

Dozens of cities, including Berlin and Rottenburg, have offered to take in migrants rescued in the Mediterranean. But German authorities have said resettling 53 migrants rescued by Sea-Watch would require EU support. (18.06.2019)

Sea-Watch has been rescuing refugees from drowning for the past seven years. In June 2019, captain Carola Rackete was detained after she entered the Italian port of Lampedusa with 40 migrants on board.