Prosecutors in Milan were looking into alleged payments from Russia to Matteo Salvini's Lega party, Italian media reported. Salvini has denied taking "a rouble" from Russia and threatened to sue those claiming otherwise. 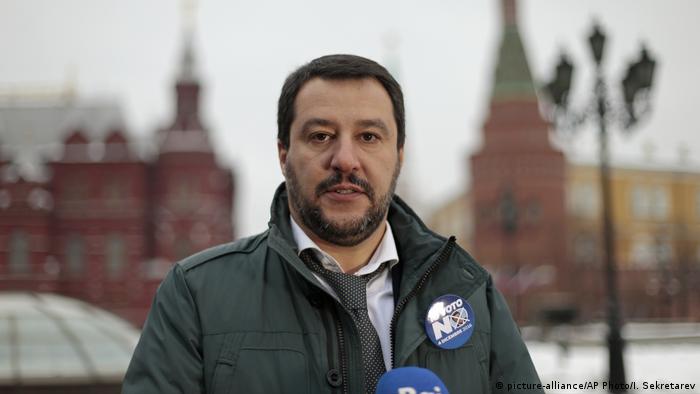 Italian authorities opened an inquiry relating to populist Lega party and the reports that some of its senior members sought millions in illegal funding from Russia, multiple Italian news outlets reported on Thursday.

Several people have reportedly been questioned in the probe. According to the Italian media, including broadcaster Rai and the AGI news agency, prosecutors in Milan launched an inquiry after weekly L'Espresso first reported on the issue in February.

However, the story only grabbed worldwide attention on Wednesday with a report by Buzzfeed. The US news outlet published an article on what it said was a secret meeting between Lega members and three unidentified Russian men in Moscow, as well as a transcript of the alleged talks.

No money, no vodka

Buzzfeed says one of the men attending the October meeting was Gianluca Savoini, a close aide and former spokesman for Lega leader Matteo Salvini. The men allegedly discuss a Russian company selling oil to Italian energy giant Eni at a large discount and allowing the party to keep part of the difference.

The funds could reach up to $65 million (€57.6 million), according to Buzzfeed's calculations. However, the online news page emphasizes that it was "unclear whether the agreement negotiated at the Metropol hotel was ever executed, or if [Salvini's] Lega received any funding."

Salvini responded to the Buzzfeed story with anger, saying he has "never taken a rouble, a euro, a dollar, or a liter of vodka in financing from Russia."

He added that he would sue anyone who accused him of such acts.

"I have sued in the past, I will do it again today, tomorrow and the day after tomorrow," he said.

Italy's populist deputy leader was keen to highlight his "shared vision" with President Trump during a visit to Washington. Salvini met Vice President Pence during the unusally high-level trip for an interior minister. (18.06.2019)