Italy's populist deputy leader was keen to highlight his "shared vision" with President Trump during a visit to Washington. Salvini met Vice President Pence during the unusally high-level trip for an interior minister. 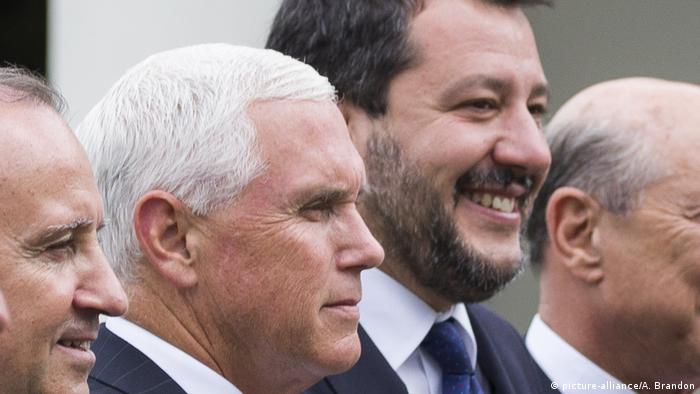 Italian Deputy Prime Minister Matteo Salvini was keen to stress his country's closeness to the administration of President Donald Trump on Monday as he met with several top US officials, including Vice President Mike Pence and Secretary of State Mike Pompeo.

"At a time when European Union institutions are fragile and changing significantly, Italy wants to be the first, most solid, valid, credible and coherent partner for the United States," Salvini wrote of the trip to Washington on his Facebook page.

Pence wrote on Twitter that "the transatlantic alliance is stronger than ever!"

During a press conference, Salvini downplayed his massive crackdown on refugees and immigrants and instead touted his "shared vision" with the Trump administration on "Iran, Venezuela, Libya, the situation in the Middle East, Israel's right to exist," and "concerns about Chinese arrogance towards Europe and the African continent."

The deputy prime minister criticized his government's refusal to follow the US in recognizing Juan Guaido as interim leader of Venezuela. The Five Star Movement (M5S), another populist party in a coalition with Salvini's League party, had refused to endorse the move.

"If it was up to me, we would have already recognized him," Salvini said.

Salvini's visit was unusual because such a major international trip would usually be undertaken by Prime Minister Giuseppe Conte or Foreign Minister Enzo Milanesi.

However, both Conte and Milanesi, independents who were chosen as compromises between the League and M5S, usually cede the stage to either Salvini or co-Deputy Prime Minister Luigi DiMaio of M5S.

Yet DiMaio too has been taking a back stage to Salvini ever since the League emerged triumphant in May's EU elections and support for M5S tumbled.

A ship operated by the German rescue charity Sea Watch rescued more than 60 migrants near Libya. Italy's far-right interior minister said he doesn't want them "getting near Italian territorial waters." (15.05.2019)