A ship operated by the German rescue charity Sea Watch rescued more than 60 migrants near Libya. Italy's far-right interior minister said he doesn't want them "getting near Italian territorial waters." 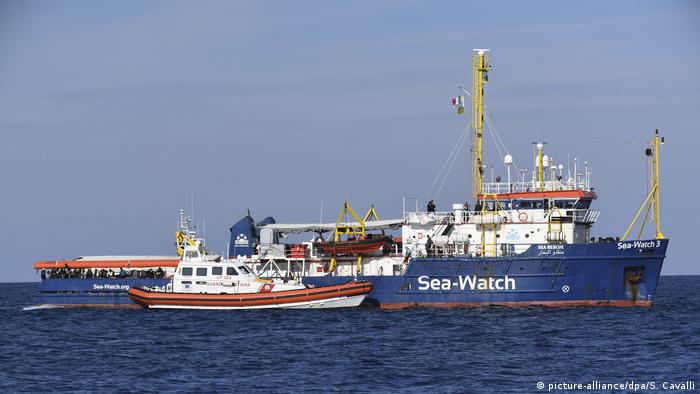 Italy's anti-migrant interior minister vowed Wednesday to block a charity ship that saved 65 migrants off the coast of Libya earlier in the day from docking in Italy.

"I have just signed an injunction order against them getting near Italian territorial waters. Our ports are, and remain, closed to migrant rescue boat," Matteo Salvini wrote in a tweet.

The Sea Watch 3 rescued the migrants from a rubber raft some 55 kilometers (34 miles) north of the Libyan port of Zuwara, a spokesman for the German charity said. The group included 11 women and seven children, it added.

Sea Watch 3, a Dutch-flagged ship, informed authorities in Italy, Malta, Libya and the Netherlands about the rescue.

He recently stepped up his trademark anti-immigration rhetoric as Italy prepares for the elections to the European Parliament at the end of May.

The United Nations considers the Libya-Italy route across the central Mediterranean the "deadliest sea crossing in the world" for migrants.

In March, the European Union suspended its ship patrols in the Mediterranean over Italian objections to the operation. The initiative had been credited with saving the lives of thousands of migrants.