Under pressure from Brussels, Rome revised its planned spending spree to cut deficit projections. At the same time, Italian officials were riled over the EU's alleged preferential treatment of France. 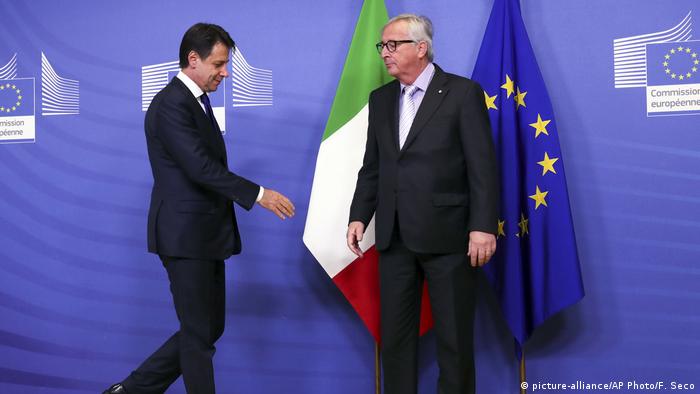 Rome offered to stay below a deficit of 2.04 percent of GDP for next year's budget in a bid to get approval from Brussels, walking back from an earlier pledge of 2.4 percent.

"We are not at all betraying the trust of Italians," he said.

EU officials did not immediately respond to Conte's proposal but said that Juncker "listened attentively" to the offer.

"Good progress has been made. The European Commission will now assess the proposals received this afternoon. Work will continue in the coming days," a spokeswoman said.

'No question of privileged treatment' of France

Previously, Conte argued that increased spending is necessary to boost the flailing economy and avoid a copy of the French "yellow vest" riots. After countrywide violence, French President Emmanuel Macron approved €10 billion ($11.3 billion) in concessions to the poor, including boosting the minimum wage and tax relief for pensioners and overtime work.

Italian officials also decried the mild response from Brussels after Paris approved the measures. The spending plan would drive the French deficit above the previously planned 2.8 percent for 2019, with the shortfall predicted to top the EU's 3 percent limit and possibly hit 3.5 percent.

"I'd love to see with what courage they could launch an infringement procedure against Italy's budget and not against France's," said Claudio Borghi, head of the Italian Parliament's Budget Committee, ahead of Conte's trip to Brussels.

Commenting on the claims of preferential treatment, EU Economic Affairs Commissioner Pierre Moscovici said, "The rules are the same for everybody."

"There is no question of privileged treatment for some and exaggerated toughness for others," Moscovici said at a conference in Frankfurt.

At the same time, he said Brussels understands that "in the face of social movements and very strong demands to reduce regional or social disintegration, a government may need to take measures."

Paris spending can be 'limited, temporary and exceptional'

Moscovici, who once served as France's finance minister, also told Le Parisien newspaper that France would only breach the deficit limit for one year, and Italy's plans would cause the deficit to overstep the boundary for three years.

France's spending can be "envisaged in a limited, temporary and exceptional way," Moscovici said.

"Every word counts. Breaching the 3 percent limit must not continue for two consecutive years and must not exceed 3.5 percent in a year," he added.

Also, France's debt was around 100 percent of its annual GDP while Italy's was 130 percent, Moscovici said.

Even so, both countries accumulated debts way past the EU's ceiling of 60 percent of the annual GDP.

France's measures could weaken Macron's international standing, undermining his efforts to strengthen the eurozone area and his urging that its members should stick to the rules.