The European Commission's new rejection of the Italian budget is the first step in disciplinary procedures that may lead to hefty fines. In its report, the Commission said Italy has "seriously violated" EU budget rules. 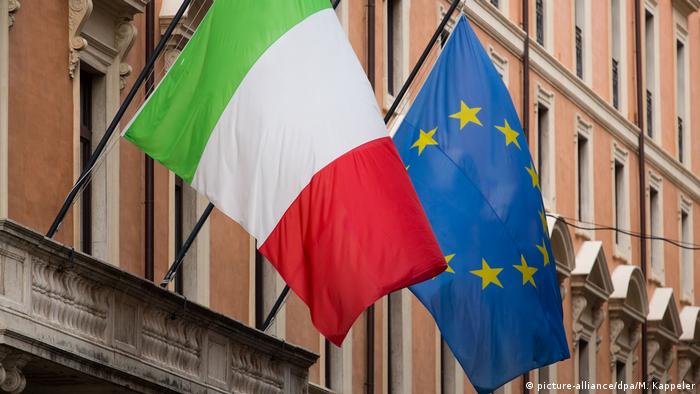 The European Commission has again rejected Italy's proposed budget on Wednesday, paving the way for financial sanctions to be applied in the next few months.

Dombrovskis said with the Italian government's current plan "we see a risk of the country sleepwalking into instability."

"We conclude that the opening of a debt-based excessive deficit procedure is warranted," he added, referring to the EU's disciplinary process against member states for over-spending.

The Commission's process is required for countries whose debt levels are above the eurozone threshold and who are not doing enough to reduce borrowing.

The country's government, led by a coalition between the populist Five-Star Movement and the far-right League, has remained largely defiant towards Brussels.

On Wednesday, Matteo Salvini, Italy's interior minister and deputy prime minister, said any EU sanctions against Rome would be "disrespectful" towards Italians.

"We are convinced about the numbers in our budget. We will talk about it in a year's time," he told reporters.

Last week Italy submitted a revised version of its budget with only minor adjustments that did not satisfy the Commission and EU member states.

Italy's game of nerves with the EU

The proposed budget aims to increase spending, which according to the government is the only way to jump-start the country's ailing economy after years of austerity.

On Monday, Italian Economy Minister Giovanni Tria described the budget as "very moderately" expansionary. But the Commission believes such an increase in spending could be dangerous for Italy and the whole eurozone.

However, the Commission sees Italy's growth forecast as overly optimistic and has calculated that with Italy's planned spending increase, the budget deficit would breach the EU's 3 percent limit by 2020.

The proposed budget also backs away from the previous government's commitment to reduce borrowing — a delicate issue for Italy.

With a debt-to-GDP ratio of 130 percent, Italy's debt level is second only to Greece within the eurozone. That is way above the recommended debt-to-GDP ratio for eurozone countries, which stands at 60 percent.

Such high debt could hinder Italy's ability to continue borrowing and be an obstacle for growth. It also potentially risks a new debt crisis like the one of 2011-2012, which threatened to destroy the euro.

The Commission's report on Italy is the first step towards the EU's excessive deficit procedure, a legal disciplinary action that can be brought against countries that breach the eurozone's debt threshold.

It will be some time, however, before the procedure, which can include hefty fines, will have any consequences for Italy.

To officially trigger the legal procedure, the Commission needs to get approval from EU member states, in particular from the bloc's finance ministers, likely at their next meeting in January.

Italy will be then be issued a new deadline to amend its budget — and reduce spending and borrowing — within three to six months.

Only at this point, if Italy still fails to comply, can the Commission apply financial sanctions, which can include fines up to 0.2 percent of GDP — about €3.5 billion ($4 billion) in Italy's case — or cuts to EU subsidies.

Rome is determined to stick to fundamental aspects of its 2019 budget despite pressure from Brussels, according to Italian Economy Minister Giovanni Tria. The EU believes Italy's plans are "overly optimistic" and risky. (09.11.2018)