France and Italy have agreed on a new system to distribute migrants across the European Union. It comes ahead of an interior ministers meeting in Malta next week. 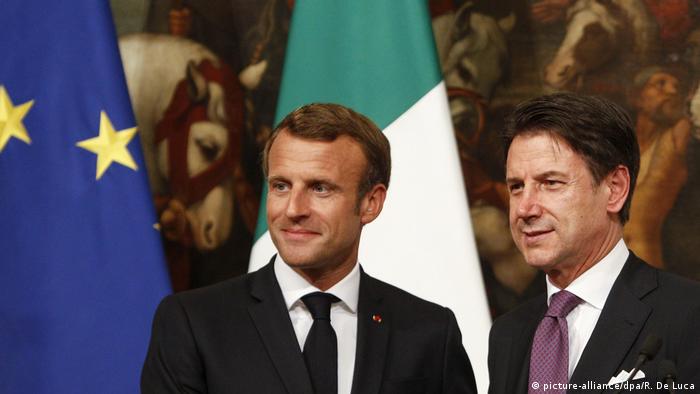 French President Emmanuel Macron and Italian Prime Minister Giuseppe Conte called Wednesday for the EU to introduce a new automatic system to distribute migrants across the bloc, as the two countries sought to patch up an acrimonious relationship under Italy's previous anti-migrant populist government.

Italy has long complained that other EU member states have not shared the burden as hundreds of thousands of people arrived on its shores in recent years after making the dangerous boat journey across the Mediterranean.

"France is ready to develop this in the framework of overhauling the Dublin accords," said Macron, referring to the EU regulation which assigns responsibility for migrants to the nation of first entry into the bloc.

"I am convinced that we can agree on an automatic redistribution mechanism" under the auspices of the European Commission, he continued.

Conte heads a weeks-old pro-European government, formed after far-right leader Matteo Salvini brought down the previous one in a failed bid to become prime minister. The new government, composed of the center-left Democratic Party and anti-establishment 5-Star, has lifted hopes that Italy will soften its hardline immigration stance.

During his 14 months as interior minister, Salvini shuttered Italian ports to humanitarian ships rescuing people at sea, leading to repeated standoffs with Brussels that were only resolved after several EU states accepted migrants on an ad hoc, case-by-case basis.

Read more:  Italy: Salvini is out, but migrants still endure his policies

Conte said he had received French support for a system to redistribute migrants whereby the entire 28-nation bloc would automatically take a share of all the new arrivals in Italy as soon as they were rescued.

"Migration is a complex phenomenon. It's vital for Europe to turn the page towards the structural, and no longer emergency, management of migrants," Conte said.

"Migration must no longer be a theme of anti-European propaganda," he added, referring to the harsh language and policies of the League.

EU ministers to huddle in Malta

Macron said EU member states that don't participate in the new distribution system would be "punished financially," a demand shared by Italy. He did not elaborate.

France and Germany have reportedly given their approval to the new system, which could also involve Luxembourg, Malta, Portugal, Romania and Spain.

Read more: Germany prepared to take in 25% of migrants who arrive in Italy by sea

The migration issue is to be taken up by at an EU interior ministers meeting in Malta on Monday, ahead of a European summit in October in Luxembourg.

Relations between Italy and France hit a nadir under Italy's previous government, and Macron is seeking to take advantage of the new pro-European government in Rome to heal bruised ties caused by disagreements, mostly over immigration.

The charity vessel's mission continued, as a second operation brought the total number of people rescued to more than 100. The boat is one of many carrying out such missions in the Mediterranean. (18.09.2019)