Italy's new governing coalition has been given the green light to govern after winning a confidence vote in the upper house of Parliament. But, after a heated debate, it was a close-run affair in the end. 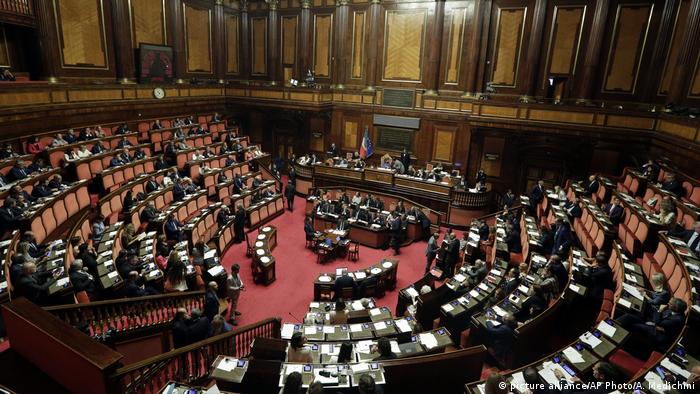 The coalition of the anti-establishment Five-Star Movement (M5S) and center-left Democratic Party (PD), led by Prime Minister Giuseppe Conte, was approved by Italy's Senate on Tuesday.

It was the last hurdle the new coalition needed to clear to begin governing, after winning a confidence vote in the lower house the day before.

The new, more pro-European government took the Senate vote by 169 to 133 in the 321-seat chamber.

Tuesday's Senate vote was expected to be a close one, as the government held a much slimmer majority there than it did in the lower house.

The populist M5S and the PD agreed to join forces after far-right League leader and former Interior Minister Matteo Salvini pulled his party out of the previous coalition with the M5S.

Salvini accused the M5S and PD of working together purely out of their mutual opposition to his leadership.

"Our doors are open to those who think first of their dignity rather than their seat (in power)," the League leader said on Tuesday, in an attempt to get some M5S supporters to defect.

Read more:Italy: Salvini is out, but migrants still endure his policies

Rome's new government has signaled that it will pursue an "expansive" economic policy, but "without jeopardizing" public finances. It will also likely step back from the hard-line punitive measures that Salvini employed with the country's immigration policy.

The new Cabinet is the youngest in Italy's history. At age 33, M5S leader and former Deputy Prime Minister Luigi Di Maio is also the youngest foreign minister the country has ever had.

Italy has a new coalition government in place, backed by the anti-establishment 5-Star Movement and the center-left Democrats. Due to the far-right League's fall from power, Italy now has a more pro-European outlook. (05.09.2019)