The charity vessel's mission continued, as a second operation brought the total number of people rescued to more than 100. The boat is one of many carrying out such missions in the Mediterranean. 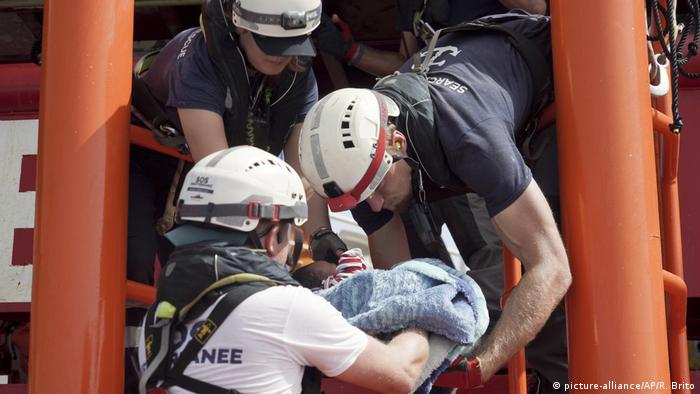 The Ocean Viking rescue boat picked up a total of 109 migrants off the coast of Libya on Tuesday, according to the organizations that run the charity vessel.

The rescue team carried out two separate missions, that also included a newborn baby being taken on board.

"We have just rescued 48 people from a wooden boat in distress, 53 nautical miles from the coast of Libya," Doctors Without Borders (MSF) and SOS Mediterranee wrote on Twitter.

MSF added: "In a 2nd operation today, @MSF_Sea &  @SOSMedIntl teams have just completed the rescue of a rubber boat in distress. Many of the 61 survivors are being treated by #MSF medics for fuel inhalation. This brings the total number of rescued people onboard #OceanViking to 109."

"Women, very young children and a newborn are among the survivors now safely onboard the Ocean Viking, now heading to investigate another possible case," they added.

In a separate development, Maltese authorities accepted on Tuesday to take in the 90 migrants saved by an Italian coastguard boat in its search and rescue zone, calming a standoff with the newly formed Italian government.

Malta had insisted that the rescued people should be taken to the nearest safe port, which in this instance was the Italian island of Lampedusa.

However, Tuesday's development has seen that reluctance dissipate.

Last week, German Interior Minister Horst Seehofer said that Germany was prepared to take in 25% of migrants who arrive in Italy by boat from North Africa ahead of EU talks on the issue in the coming weeks.

Dozens more are still missing as rescue teams frantically search for survivors in the Godavari river in eastern India. The boat was carrying more than 70 passengers when tragedy struck. (15.09.2019)

Six EU countries have said they will accept more than 300 migrants from a rescue ship stranded in the Mediterranean. The Maltese prime minister said none would stay in Malta, where they will disembark. (23.08.2019)

Prosecutors in Rome have passed the case onto investigators to determine whether Salvini incited violence against the refugee rescue boat captain. Salvini has said the charges were like a medal of honor for him. (06.09.2019)