Prosecutors in Rome have passed the case onto investigators to determine whether Salvini incited violence against the refugee rescue boat captain. Salvini has said the charges were like a medal of honor for him. 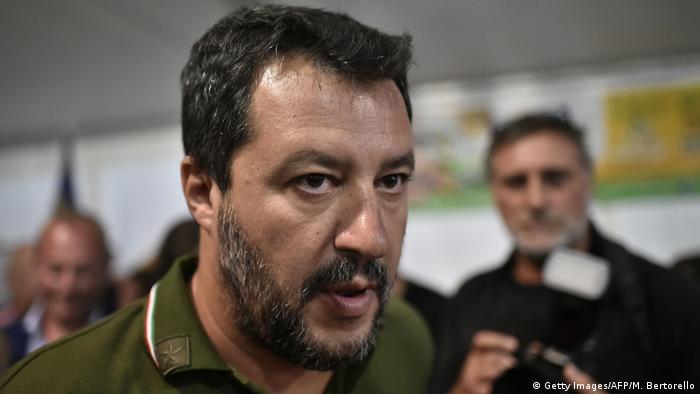 Prosecutors in Italy have decided to move forward with libel charges against former far-right Interior Minister Matteo Salvini for comments he made in his official capacity about German refugee rescue ship captain Carola Rackete.

According to the original complaint, Rackete said Salvini had "made many statements through the various channels at his disposal (TV interviews, Facebook updates, posts on Twitter) that are not manifestations of a legitimate right to criticize, but gratuitous assaults on my person that are directly and indirectly threatening."

Back in June, Rackete defied the draconian anti-migration policies of Salvini's Interior Ministry by docking her boat in Sicily to deal with the humanitarian crisis that was developing on board hership, the Sea Watch 3. She was arrested shortly thereafter, and Salvini branded her a pirate, a criminal, and a "rich, white German woman" trying to assuage her own guilt.

NGO: Salvini is 'Fueling a massive spiral of violence'

The German NGO Sea Watch first launched the suit against Salvini in early August, claiming that he was using his immense influence to incite violence against Rackete.

On Monday, prosecutors in Rome decided the case had enough merit to pass along to investigators in Milan, where Salvini resides. Among the documents are a request to seize and search his social media accounts.

The far-right League party leader remained defiant, saying the charges were like "a medal" for him.

Salvini's hardline anti-immigrant measures have seen him run afoul of prosecutors on several occasions, including some in Sicily who ruled that the former deputy prime minister could be charged with more than 100 counts of kidnapping over refusing to let refugees disembark from rescue vessels on Italian soil. However, Salvini has parliamentary immunity from prosecution.

When he was co-deputy, it was unlikely that the government would have voided this immunity. Then, in August, Salvini attempted to topple the coalition of his League party with the populist Five Star Movement (M5S), hoping snap elections would be called so that he could take over the post of prime minister.

As that gambit has backfired, it remains to be seen if the new coalition government of M5S and the Democratic Party (PD), will still feel the need to protect Salvini in the same way.