Both countries exchanged acerbic remarks earlier in the week after Italy refused to allow a migrant boat to dock. Prime Minister Giuseppe Conte said the dispute was over after meeting the French president in Paris. 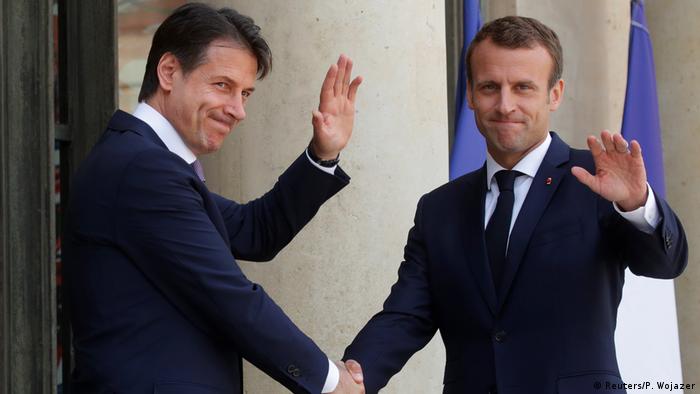 Italian Prime Minister Giuseppe Conte said on Friday that the row between Italy and France over Rome's refusal to allow a boat carrying more than 600 migrants to dock had been settled.

Speaking alongside French President Emmanuel Macron in Paris, Conte said it was "time to turn the page" on the dispute and focus on a "radical paradigm change" in the way the European Union deals with mass migration into the bloc.

Conte said Italy would present a proposal to overhaul the EU's asylum and immigration rules to the bloc in July. Setting up centers for processing EU asylum claims in African countries would be part of the proposal, he said.

Macron said that he supported the measure and other "profound reforms" of the EU's asylum rules, and added that the EU had not shown enough solidarity with Italy, which is the first country many migrants from North Africa arrive at when they enter the bloc.

Italy had demanded an apology from France on Wednesday after French government spokesman Benjamin Griveaux, who claimed to be quoting Macron, said Italy had acted with "cynicism and a measure of irresponsibility" by refusing to allow the charity-run boat, the Aquarius, to dock.

The Aquarius has since been making its way to Spain after Madrid said it would allow the migrants to dock at one of its ports.

France's foreign ministry said migrants who "meet the criteria for asylum" could be allowed to stay in France after they arrive.

The ship is expected to arrive on Sunday, according to Spanish Prime Minister Pedro Sanchez. On Twitter, he called for "a new Europe where national egotism does not prevail."

Macron and Conte are set to meet again at a summit of EU leaders in Brussels on June 28-29.

Salvini, who also leads the anti-migration League party, said Italy would propose measures to strengthen the bloc's external border. He has said he supports Austrian Prime Minister Sebastian Kurz's call for an "axis of the willing" to combat illegal immigration into the EU.

Macron said on Friday that he was wary of Kurz's use of the word "axis," a term fascist Italy and Nazi Germany used to describe their alliance during World War II.

"I don't trust catchphrases that did not bring us luck in the course of history," he said.

"Countries are committed to the paths taken by their heads of state or government," Macron said. "Germany also has a head of government."