Italy has remained firm in its decision to shut its ports to a ship carrying more than 600 migrants. But Rome insisted it is still willing to help asylum-seekers — under certain conditions. 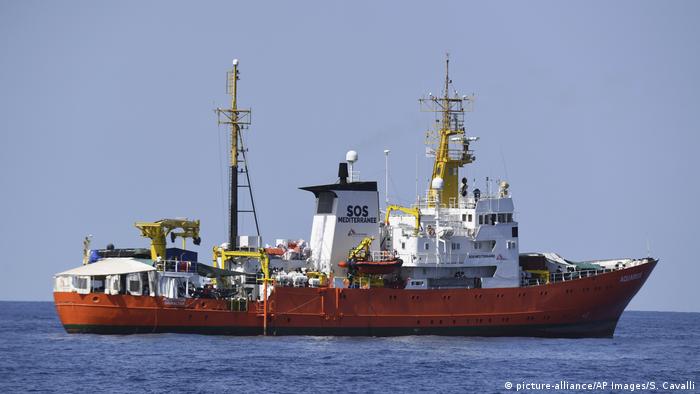 Italy said on Wednesday that it stood behind its decision to reject port for the French NGO rescue ship Aquarius following sharp criticism from French President Emmanuel Macron, but added it would continue to allow Italian vessels carrying shipwrecked migrants in its ports.

"We will not change (our position) on ships belonging to non-governmental organizations," Interior Minister Matteo Salvini, who is the head of the anti-immigrant League party in Italy, said in an interview with Italian newspaper Corriere della Sera. "Ships belonging to foreign organizations and flying foreign flags cannot dictate Italy's immigration policy."

Italy and Malta refused to let the Aquarius dock on Sunday. The ship, operated by the Franco-German charity SOS Mediterranee, has 629 migrants onboard, including 123 unaccompanied minors and seven pregnant women.

The Aquarius was given permission to dock in Spain's eastern port of Valencia on Monday, but it remains uncertain whether the ship will be able to make the journey.

Italian Prime Minister Giuseppe Conte hit back at the criticism, saying in a statement: "Italy cannot accept hypocritical lessons from countries that have always preferred to turn their backs when it comes to immigration."

Salvini added he hoped for "an official apology as soon as possible" from France.

"If the French have the humility to say they are sorry, we can put it behind us and be friends like before," he told reporters on the sidelines of a business conference.

Conte and Macron are due to meet in Paris on Friday.

Other boat allowed to dock

The Italian coast guard ship Diciotti carrying 937 migrants docked at the port of Catania on Wednesday. They were saved during several rescue operations off the coast of Libya.

Transport Minister Danilo Toninelli said the fact that migrants rescued by Italian ships were landing in Italy showed that the government was not "inhumane or xenophobic."

Italy has taken in more than 640,000 migrants and refugees, but EU states have largely ignored requests by Rome to take some of the newcomers in and share some of the cost for their care.

The League party achieved its best-ever result at the Italian elections in March. It ran on an anti-immigrant platform which included pledges to deport hundreds of thousands of migrants and halt the flow of newcomers. It formed a coalition with anti-system 5-Star Movement in May.

Vogel: 'We have an obligation to rescue these people'

A few years ago, Klaus Vogel piloted a container ship. Now he has received the European Citizens' Prize for his work saving people stranded at sea off the coast of North Africa with his rescue ship, the Aquarius. (16.10.2016)