Emmanuel Macron has slammed Rome's "cynicism and irresponsibility" after Italy's new government turned away a ship full of migrants. Italy had a responsibility to help them, the French president said. 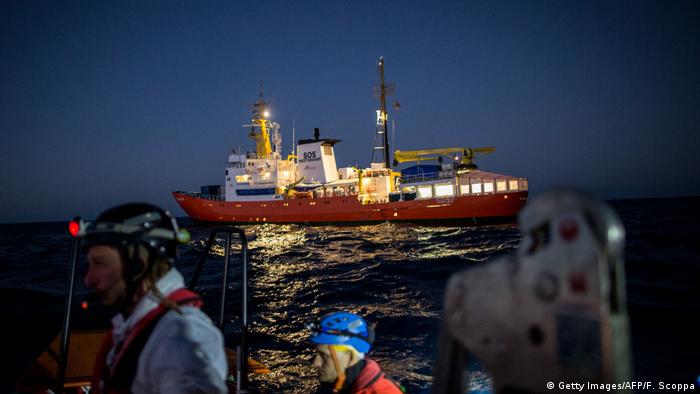 Top French officials on Tuesday publicly decried Italy's decision to reject port for the French NGO rescue ship, Aquarius, with 629 immigrants on board. According to Emmanuel Macron's spokesman Benjamin Grivaux, the French president believes Italy was obligated to accept Aquarius under maritime law.

"There is a degree of cynicism and irresponsibility in the Italian government's behavior with regards to this dramatic humanitarian situation," Griveaux quoted Macron as saying.

Griveaux said Macron made the remarks during Tuesday's weekly Cabinet meeting. Macron also praised Spain for pledging to accept the ship once it reaches their shores.

"You can't create a precedent that will enable one European country to offload onto other European countries," Griveaux said. "We need to show solidarity which Italy has not shown."

Separately, France's Prime Minister Edouard Philippe told French lawmakers that the new Italian government had "chosen to not respect its international obligations in terms of security for the people."

"This episode shows that there is no hope in the short-term for a national solution to this problem," he added. "There can only be a European response."

Italy's southern shores mark a prime destination for migrants sailing across the Mediterranean. The country has often complained that the EU was not doing enough to help with the influx of around 700,000 African migrants since 2013.

In his speech, however, Prime Minister Philippe said that no European country had done more than France to stabilize Africa by conducting military operations in the continent.

The migrant-carrying ship is now set to sail to Spain after it was rejected entry to Italy. Also on Tuesday, France's Foreign Minister Jean-Yves Le Drian urged Rome to reconsider its position.

Le Drian cited activists' reports that some of the passengers were in need of medical attention and considered at risk.

"The NGOs have said the time to get to Valencia would be too long given the humanitarian situation on board," the minister said, adding that Paris was "solemnly asking Italian authorities to reconsider their position."