Spain's new prime minister, Pedro Sanchez, has said the Aquarius may dock in Valencia. With 629 people on board, it has been waiting for a secure place to dock amid a diplomatic standoff between Italy and Malta. 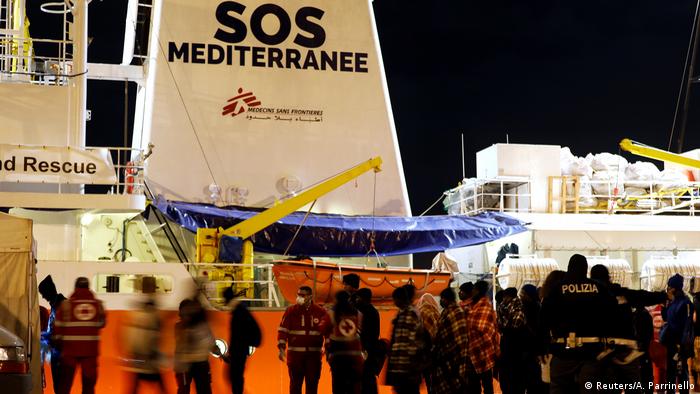 A French NGO's rescue ship, the Aquarius, was given the go-ahead to dock in Spain's eastern port of Valencia on Monday.

"It is our obligation to avoid a humanitarian catastrophe and offer a safe port for these people," Spanish Prime Minister Pedro Sanchez's office said in a statement, adding it wanted to comply with its international responsibilities on humanitarian crises. Sanchez, a socialist, issued the instructions after Italy and Malta refused to let it dock.

The French organization SOS Mediterranee said the ship carrying 629 migrants, including 123 unaccompanied minors and seven pregnant women, was picked up off the coast of Libya on Saturday. Among those on board were 400 migrants rescued by the Italian navy and merchant vessels before being transferred to the Aquarius.

From Savior to ‚Human Trafficker‘

Italy and Malta, who had both refused to allow the rescue ship to dock in their ports, thanks the Spanish government for offering to receive the ship. However, it remains uncertain whether the Aquarius would feasibly be able to make the voyage, given that it currently sits some 1,400 kilometers (over 750 nautical miles) away from Valencia.

"It means that we need at least two more days of sailing, which is not possible today with 629 people on board," SOS Mediterranee Maritime Operations Manager Antoine Laurent said.

Logistics also counted against setting a course for Spain, Laurent added. "We would need a resupply at sea which is not so easy to organize so we urge Italy to find a solution very soon close to our position," he said.

International aid group Doctors Without Borders, which has staff aboard the Aquarius, warned that food and water on the ship would run out by Monday night.

Further, some of the passengers were suffering from water in their lungs, as well as from chemical burns caused by gasoline mixing with seawater. Seven female refugees onboard are pregnant

"Saving lives at sea is a duty, but transforming Italy into an enormous refugee camp is not," Italy's Interior Minister Matteo Salvini said on Facebook on Monday. "Italy is done bowing its head and obeying. This time there's someone saying no." Salvini, head of the right-wing, anti-immigrant League party, had promised during his election campaign to stop to the mass influx of migrants from Africa.

Salvini warned a German NGO's rescue ship that it may not be allowed to dock in Italy if it picks up migrants off the Libyan coast. Spokesman for Germany's Sea Watch charity, Ruben Neugebauer, said that while it still did not have any migrants on board, Salvini was "making a point at the cost of people in distress," something he said was "highly irresponsible."

Appeals to Italy and Malta

Germany called on Italy and Malta to "meet their humanitarian responsibilities" as both nations refused to allow the Aquarius to dock. "…I can say that we are concerned about the situation of the people on this ship," said German government spokesman Steffan Seibert.

"The priority of both the Italian and Maltese authorities should be ensuring these people receive the care they need," said European Commission spokesman Margaritis Schinas. "We call on all involved to contribute to a swift resolution so that the people on board the Aquarius vessel may be safely disembarked as soon as possible."

The UN Refugee Agency (UNHCR) appealed to concerned governments on Monday to allow the immediate disembarkation of hundreds of people on board the Aquarius.

"People are in distress, are running out of provisions and need help quickly," UNHCR's Vincent Cochetel said in a statement. He added that "broader issues" such as sharing responsibilities "should be looked at later."

More than 600,000 mostly African migrants have reached Italy by boat from Libya in the past five years. Right-wing politicians have accused charity boats operating off the coast of Libya of operating as "taxis" for migrants.

The migrant influx has led to a populist backlash, with Salvini vowing to prevent Italy from becoming the "refugee camp of Europe."

On Friday, he suggested NATO intervene to protect Italy, saying the country is "under attack from the south."

SOS Mediterranee said late Sunday that it had received instructions from Italian authorities to hold position between Malta and Italy after previously heading north.

"Our only objective is the disembarkation in a port of safety of the people that we rescued yesterday in difficult conditions," it said, adding that it "took good note" of the Italian Interior Ministry's statements.

Inside Europe: Migration through the Mediterranean

Inside Europe: Migration through the Mediterranean

Matteo Salvini has warned "the good times for illegals are over." EU ministers will soon be debating the controversial Dublin Regulation at a high-level bloc meeting. (04.06.2018)

The Lega Nord chief has said he has a "right" to govern after winning 17 percent of the vote in national elections. DW looks at the man who unseated the twenty-year leader of Italy's far-right party. (05.03.2018)

Joe Biden lays out foreign policy vision: 'America is back' 6h ago