Italian islanders block harbor to prevent influx of migrants | Europe| News and current affairs from around the continent | DW | 29.03.2011

Locals on the Mediterranean island of Lampedusa are resorting to desperate measures to prevent more migrants from landing on their shores. Now the Italian government has pledged to evacuate thousands of migrants. 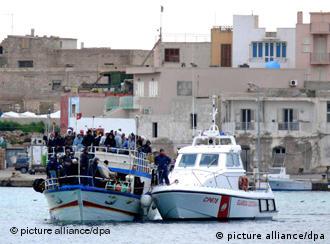 Thousands of migrants have arrived on Lampedusa by boat

Tension is rising in Italy over thousands of African migrants who've arrived on the Mediterranean island of Lampedusa in the past few weeks. Several local people have resorted to drastic action to prevent any more boats from landing in the tiny community. Fishermen have blocked the harbor and women have chained themselves to the quayside.

"We've tried to save Lampedusa for our children," one woman cried furiously to the TV cameras.

Lampedusa lies closer to North Africa than to mainland Italy. According to the latest statistics released on Sunday, 18,500 migrants have arrived there since the beginning of this year, mainly from Tunisia. That compares with just 4,000 in the whole of 2010. The local residents number only around 4,500 themselves - and they're swamped. 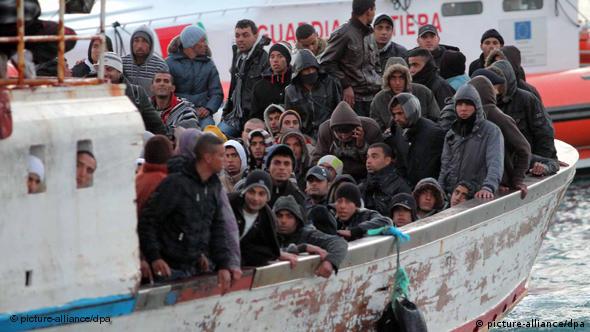 Human rights organizations have criticized facilities on the island. Karl Kopp of the German refugee rights group Pro Asyl said the migrants should be treated in a more humane way.

"In a reception facility for 800 people, there are now more than 5,000 people living on the island," Kopp told Deutsche Welle. "So there is a lack of drinking water, the food supply is not proper, and there is a risk for the few women living in these different camps."

Pro Asyl stressed that, given the unstable situation in North Africa, "applications for asylum need to be considered carefully."

According to Lampedusa Mayor Dino De Rubeis, one small hillside near the docks has been transformed into an open toilet, to the outrage of local residents. Most of the migrants are forced to sleep in the open air. "Above all we need blankets," one aid worker said. He was critical of the Italian government.

"I just can't explain how the government of a civilized nation can act like this," the aid worker told German public broadcaster ARD. "How can they make a whole island uninhabitable? For the residents, but also for the migrants who come here. It's completely monstrous."

The islanders accuse the government in Rome of acting deliberately to discourage potential migrants from making the journey across the Mediterranean. Karl Kopp of Pro Asyl agrees with them.

"Maroni and Berlusconi want to use these pictures as a deterrance measure," Kopp said. "And as a symbol to say 'we are overstretched, we cannot stand this any more.'"

If that is the policy, it clearly hasn't worked so far. As recently as late Monday, around 150 Eritreans and Somalis arrived by boat in Lampedusa. 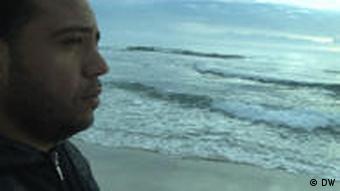 Many young Tunisians hope for a better life in Europe

Now, Rome has finally recognized the situation is untenable and has decided to send six ships to the island to evacuate around 6,000 refugees to the mainland. That's the first piece of good news in six weeks, said Gianmaria Sparma from the local government in Sicily.

"This is clearly a success for the inhabitants of Lampedusa, which we helped to bring about," Sparma said. "The government has heard our calls, now we are just hoping that the migrants will be evacuated on Wednesday and Thursday."

Not just an Italian problem

The Interior Ministry is preparing to accommodate the migrants across the whole of Italy. But according to Italian Interior Minister Roberto Maroni, their stay on Italian soil should be limited. If the government in Tunis is not in a position to stem the flow of migrants from its country, Maroni is threatening to begin deporting the refugees back to North Africa.

"We've already prepared everything, and on Wednesday, shortly after our special cabinet meeting, we plan to begin the evacuation," Maroni said. "Of course that's a difficult course of action. But the Tunisian authorities could also... solve the problem themselves."

Many Tunisians are solving the problem in their own way. For most of them, Italy is only a through station on their way to France and elsewhere in Europe, where they have family and friends.

Many are leaving the poorly-guarded accommodation of their own accord and making their way towards France. This week, a reception center is being set up in Ventimiglia station - a town on the Italian-French border. That's for all those migrants who'll be turned away from France and sent back to Italy.

In the wake of Tunisian migration to Italian territory, Italy has voiced fears more refugees will flee unrest in Libya. But EU ministers have turned down a request to take in Libyan migrants if they reach Europe. (24.02.2011)

The EU has offered to fast-track funds for Italy to help deal with a sudden wave of migrants from Tunisia. Earlier, Germany rejected suggestions that it should lighten the load of refugees from southern European states. (16.02.2011)

Italy warns of an immigration 'emergency' due to North African unrest

Italy says it can no longer depend on Tunisia to take back undocumented immigrants since the country's January coup. Italy's interior minister has warned of a brewing "humanitarian emergency," as hundreds arrive by boat. (11.02.2011)