EU grants Italy emergency funds to deal with migrant influx | Europe | News and current affairs from around the continent | DW | 16.02.2011

The EU has offered to fast-track funds for Italy to help deal with a sudden wave of migrants from Tunisia. Earlier, Germany rejected suggestions that it should lighten the load of refugees from southern European states. 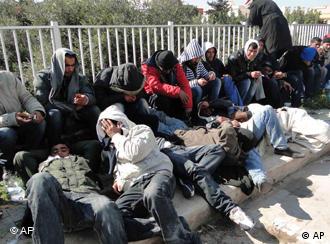 Immigrants have flocked to the small island of Lampedusa

The European Union on Tuesday offered to fast-track funds for Italy to help it deal with a sudden influx of migrants from Tunisia. 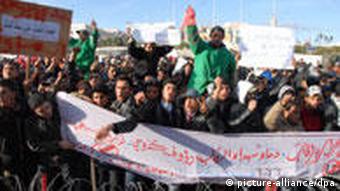 Protests in Tunisia led to the toppling of the government

EU Home Affairs Commissioner Cecilia Malmstrom told the European Parliament in Strasbourg that they had "identified a comprehensive series of measures as well as quick financial assistance" to help Italy.

"Emergency financial envelopes" from existing EU funds for refugees and border control are to be mobilized, officials in Brussels said. It put no figure on the funds offered.

No to quota system

Earlier on Tuesday, the German government rejected a proposal that Tunisian refugees in Italy be automatically apportioned to other countries in the EU.

"Such a mechanism doesn't make sense," said Ole Schröder, the Germany's deputy interior minister, at a police conference in Berlin.

German Interior Minister Thomas de Maiziere ruled out the idea, claiming Germany already had a good record on the number of refugees it already accepted. He said at present Italy was "challenged but not overwhelmed" and that the problem appeared to be a transitional one.

"We cannot solve the problems of the whole world," de Maiziere told the German television network ZDF on Tuesday evening.

The comments came in response to remarks by the joint leader of the Green party, Cem Özdemir, saying that northern Europe should help lighten the immigrant load of Mediterranean states.

"The north should not leave the south in the lurch," Özdemir told the German newspaper Rheinische Post.

Social Democrat politician Michael Hartmann sided with the Greens, saying Germany could not encourage democratic change in Tunisia without accepting that there may be financial implications. 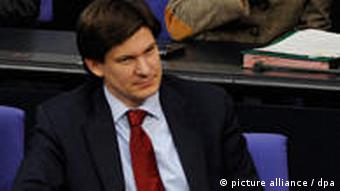 Schröder does not want to take on more refugees

"Germany must make a significant contribution in terms of accepting refugees," said Hartmann.

However, Schröder rejected the claim that Mediterranean countries have been burdened with more refugees than their northern neighbors. In the last year, Germany has taken in around 48,000 asylum seekers. Sweden has taken on 30,000 refugees - five times the amount that Italy has accepted.

Schröder said dividing up the refugees would mean the original host country would have no impetus to uphold strict proceedings for granting asylum because the immigrants would be sent on to another country anyway.

And it's not just a border control problem, according to Schröder, who said illegal smuggling needs to be better controlled and that the living conditions in North Africa had to improve.

His comments were echoed by Foreign Minister Guido Westerwelle, who in an interview with newspaper Die Welt said Germany should "play its part in ensuring conditions in countries of North Africa become even better."

Instead of redistributing the refugees, the German government has called for financial aid, the deployment of the European border patrol agency Frontex and a voluntary intake of refugees.

"Action plans are in place," said the head of Frontex Ilkka Laitinen in Berlin, adding that Italian and Tunisian authorities are also in place.

It comes as the United Nations High Commissioner for Refugees (UNHCR) said on Tuesday that at least four people had drowned off the coast of Lampedusa, the small Italian island where most refugees have headed.

Lampedusa has reached its full capacity for immigrants

In response to the influx of at least 5,000 Tunisian immigrants, Rome has declared a "humanitarian emergency."

The Italian Interior Minister Roberto Maroni said he expected a further 80,000 to arrive in the coming months, although no fresh landings of refugee boats have been reported in the last 24 hours.

Italian authorities have started to move refugees from Lampedusa to other camps around Italy, but facilities are bursting at the seams.

Maroni has called on Frontex to step up controls in the Mediterranean and to cover part of the cost of deporting migrants, and for EU members to share the burden of accommodating refugees and asylum seekers.

Maroni has also requested 100 million euros ($135 million) from the European Commission to cover some of the costs of handling the arrivals.

The latest arrivals have triggered a spat between Italy and the European Union executive, with claims and counter-claims being traded over how to deal with the immigrant surge.

On Tuesday, Italian Foreign Minister Franco Frattini reiterated Rome's criticism of the EU's handling of the issue, saying the EU "was unprepared, did not foresee, nor had prevented" the crisis.

Tunisia has called a proposal by Italy to deploy its police within the North African country 'unacceptable,' saying it will handle its internal affairs. After an appeal from Rome for help, the EU is set to lend a hand. (14.02.2011)

As thousands of refugees flee Tunisia for Italy, cracks are appearing in the 'Fortress Europe' ideology. Isolationism is unworkable and only harms the continent, says Stefan Troendle of Bavarian public broadcaster BR. (15.02.2011)