Inside Germany′s first one-stop migrant reception and deportation center | Germany | News and in-depth reporting from Berlin and beyond | DW | 01.09.2015 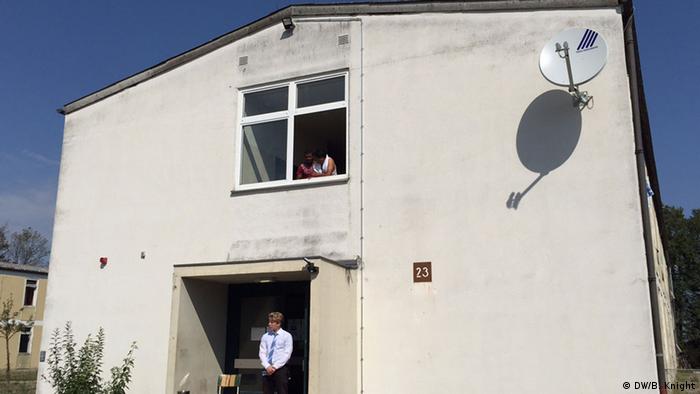 There was no ribbon, no pair of giant scissors - but maybe that's because there was no time. The government of Bavaria has rushed through its plans to speed up the deportation of asylum seekers from the Balkans, and on Tuesday the state's social affairs minister, Emilia Müller, arrived in Manching, near Ingolstadt, to open Germany's first one-stop reception center (pictured above) exclusively for people from what the German government deems "safe" countries of origin. This comes barely a month after state premier Horst Seehofer originally brought up the idea.

The Max Immelmann barracks in the city of Ingolstadt is designed specifically for people "without any prospects of staying," as a ministry statement put it: This means people from Bosnia, Serbia and Macedonia - all on Germany's official list of "safe" countries - as well as people from Kosovo, Montenegro and Albania, which Bavaria thinks should also be put on the list.

In light of the drama at Budapest's main train station, where hundreds of migrants were suddenly allowed to board trains to Munich, Müller argued that it was not a moment too soon. "The asylum seekers in Hungary all want to come to Germany," she told reporters at the new center. "When you ask people where they want to go, they say, 'Germany, Germany, Munich!' " 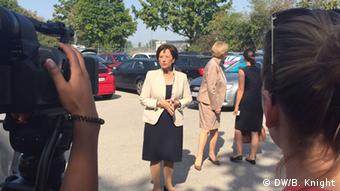 Social Minister Emilia Müller spoke with reporters at the opening

Müller, along with a clutch of reporters and cameramen, was given a brief half-hour tour through the corridors of the new administrative center, where all the necessary equipment seemed in place, despite a makeshift impression. Around 250 asylum seekers are already living in the former military barracks, and a further 250 are expected in the coming days. This is one of three such installations planned in the area, bringing the local capacity to 1,500.

If all goes according to the ministry's plan, registration, finger-printing, medical checks, and asylum hearings will all be carried out on site within four to six weeks. And not only that: deportation may even be carried out from Ingolstadt's local airport - as long as the military gives its approval.

"In Manching, all participants are collected under one roof," Müller said. "This is where the administration, foreigners' registration authority, the Federal Office for Migration and Refugees, as well as the administrative court, will work hand in hand - because short routes accelerate the process."

As reporters were shepherded through the corridors and across the grounds (and politely kept from wandering around alone to meet asylum seekers), officials were already sitting at their newly installed computers ready for the first hearings later in the day.

"If they're here for economic reasons, then the hearings are fairly quick - about an hour," said Carsta Müller, an official settling into her new office. "If it's a persecution case, then it can take four or five hours." 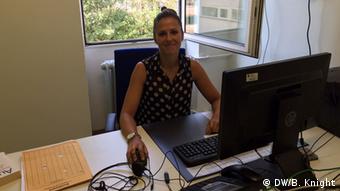 Carsta Müller's job is to interview the refugees

But since the whole point of this center is that those deemed economic migrants have been filtered out in advance on the basis of their nationality, Carsta Müller admitted she was only expecting short hearings: over 99 percent of Balkan migrants are denied asylum in Germany. "The Albanians, for example, are usually very honest: they say they are here because they want to find a job, or study," she said.

Not to scare people off

Meanwhile, Emilia Müller, Bavaria's social affairs minister, took pains to deny that the new center represented what she called a policy of scaring people off. "We treat all asylum seekers the same, whether they're from the western Balkans or from a war zone. They are all housed in humane conditions," she said - though in the same breath she also said she hoped that "word would spread quickly" in countries like Albania and Bosnia that the chances of gaining asylum were very slim.

It's not that all the locals trusted the minister. Tuesday's press tour was notably free of the protests and violence incited by neo-Nazis outside a refugee shelter in Heidenau, Saxony, last week, but two old men did show up outside the gates to see what was going on. "They're all traitors, every one of them. Not one bit of national pride," a man named Hensching told DW, as he glared at the security guards, reporters, and politicians milling around in the car park. "We fought to have these barracks here in the 70s - the soldiers were glad to be here. But now what do they do? They ship all these damn people over here!"

Ingolstadt is only about 20 kilometers (12 miles) north of Reichertshofen, the scene of one of many attacks on asylum centers that Germany has witnessed this year. Herbert Nerb, mayor of the local village of Manching, was apprehensive about the possibility that the far-right might make this center the new target of an attack. "I can only hope that it won't happen," he told DW. "I think the people who have suffered and experienced dramatic things, who are being persecuted, get a lot of support from the population - but the others don't. We have to say it honestly: we can't pretend that everyone is just happy to see them come." 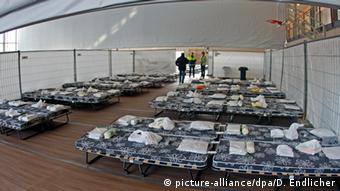 Many refugees are housed in makeshift shelters, like this one near Rosenheim, Bavaria

Bavaria's haste to turn people from the Balkans away has been criticized by pro-asylum groups, who reject the whole definition of "safe" countries and what they call a "conveyor belt" approach to asylum policy.

A number of human rights reports, they say, show that Roma and other minorities in the region suffer systematic racist abuse and social ostracism. Similarly, groups like Pro Asyl and the Bavaria Refugee Council argue that Balkan migrants hardly represent a problem at all. On Monday, Pro Asyl released previously unpublished statistics that showed, as the organization's statement put it, "that far fewer refugees come from Kosovo, Serbia, Macedonia, Montenegro and Bosnia-Herzegovina than is being publicly insinuated."

"The debate about safe countries of origin is a distraction from the true challenge," Pro Asyl's Günter Burkhardt said. "Hundreds of thousands of refugees need to be taken in by Europe and permanently integrated."

Budapest’s Keleti train station has been closed in an attempt to prevent migrants from fleeing to Austria and Germany. Refugees said they spent hundreds on tickets after police told them they could expect free passage. (01.09.2015)