Austria struggles to cope with influx of refugees | Europe| News and current affairs from around the continent | DW | 01.09.2015

Hundreds of refugees are making their way across the border from Hungary to Austria on a daily basis - most of them are now heading to Vienna, hoping to continue on to Germany. Alison Langley reports from Nickelsdorf. 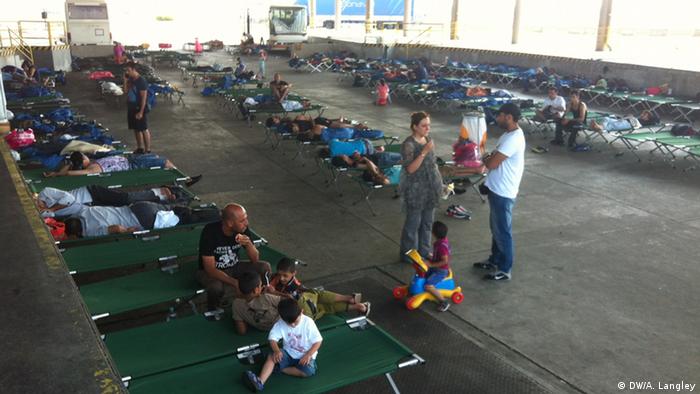 It took only a matter of minutes for Austrian police to find its first van attempting to carry seven smuggled refugees across the Hungary border - painstaking work and a thankless task amid searing 37-degree heat.

Nearly all the probably 200 refugees picked up along the border didn't want to be in Austria. And they are only a fraction of the 7,000 asylum seekers that Red Cross workers there say are expected in the coming weeks.

"We don't want to be fingerprinted here," said Muhanned, an Iraqi who said he had relatives in Germany and he, too, was hoping to make it there.

Muhanned and 30 others had been picked up early Monday after they had been dumped next to a field just across the border. They were brought to a waiting area run by the Red Cross near where police were stopping all vans and trucks. 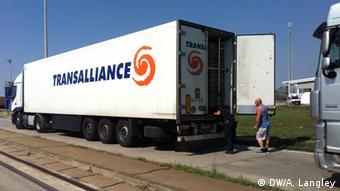 Police are stepping up their controls

Under the European Union's Dublin Accords, refugees must seek asylum in the first EU country they land. But Hungary, the first EU country along the Balkan route used by those fleeing war, is not accepting migrants. Yesterday it allowed hundreds to cram into trains and leave Budapest. But others continue to find their way across the open border with Austria.

The Alpine country estimates more than 34,000 people have been smuggled into the country so far, up from 9,800 in all of 2014. To date 628 people suspected of human trafficking have been arrested, compared with 277 last year.

After the gruesome discovery of 71 bodies in a van on the A4 last week, Austrian police have stepped up checks of traffic crossing the border. In two days, more than 200 people have been found through the checks, and six smugglers arrested, including an Algerian man who was stopped on Monday.

"It's is our moral duty to help," said Lieutenant Colonel Andreas Stipsits of Burgenland's police force as he stood in the heat and watched as a steady line of sedans, estate wagons, SUVs and vans crept across the border.

While police checked for smuggled asylum seekers along check points, country roads and rest stations, hundreds more made their way by train to Vienna's West Train Station in plain sight, where police appeared either overwhelmed or unwilling to stop those who wished to continue.

Stipsits agreed that professional smugglers will not be fooled by the traffic check points. So the police also patrol roads and rest stops, looking for groups of people walking to Vienna where they hope to take a train to meet friends and relatives in places like Germany, Belgium or Sweden.

And there appear to be many. Tobias Mindler, head of communications for the Red Cross in Burgenland, said his volunteers are helping about 250 refugees per day.

The group found on Monday included two women, one man and four children from Syria crammed into a tiny blue Peugeot 306 hatchback. The driver, wearing a cast on his leg, was arrested, hobbling in crutches as police walked him away. "I have no sympathy for him," Stipsitz said.

The waiting area where the family was eventually taken is grim. Green canvas cots provided by the Red Crosss line a concrete wall. There is no building, but it is protected from the sun by a large roof. Containers provide showers and portable toilets. There, a motley group of tired and uncertain people sit and wait, sometimes up to 48 hours. 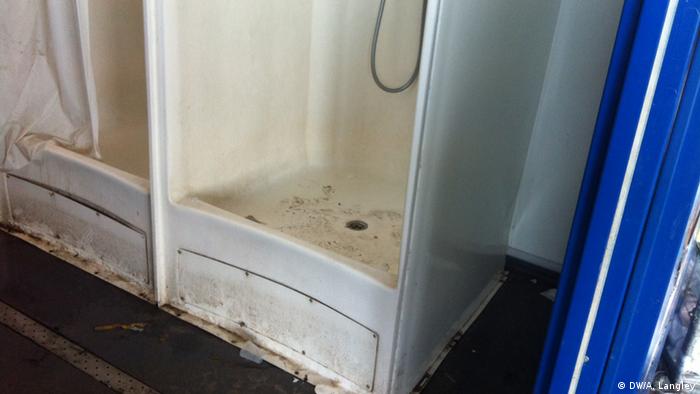 Indicative of the conditions many refugees are having to deal with

Given the number of refugees moving from Macedonia, through Serbia and Hungary, Mindler said the Red Cross and local police are anticipating that as many as 7,000 will enter Austria in the coming weeks.

His volunteers have erected three gathering points where asylum seekers must wait before there is a place at an intake center. So far, only this one is in use. These waiting areas are necessary because intake centers in Austria are full of refugees waiting for more permanent housing.

The Nickelsdorf border is the largest of six entry points where 56 police are now running the periodic checks. Although politicians announced at the weekend that the checks would be run around the clock, traffic piled up about 50 kilometers long Monday afternoon.

"We had to wait three hours, but what can you do? It's better than letting people die," said one woman, a passenger in a white station wagon with Austrian license plates. Others were not so forgiving. "Three and a half hours long," yelled a red-faced man in a car with Hungarian license plates before launching a string of expletives against the Austrian police.

"If we are rescuing people's lives and want to fighting the smugglers, then we have to accept the traffic jams and obstructions," Interior minster Johanna Mikl-Leitner told a press conference Monday morning.

Meanwhile, in the waiting area, Ahmet Hussein, 40, sat with his wife and 16-year old daughter and contemplated their future. They had paid smugglers 4,000 euros to ferry them from Hungary to Vienna, but the driver stranded the group - there were 30 in all - in the middle of a field not far from the border. Shortly afterwards, police picked them up. 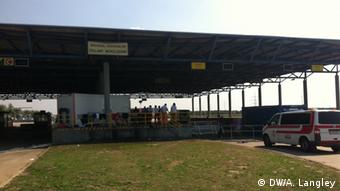 Waiting to be processed

Although they had not eaten for two days, they were disappointed to be in Austria. "We heard they don't accept refugees anymore; they'll send us back. We heard salaries aren't good," he said through an interpreter.

Then he asked a visitor if Austria had good Arabic schools for his daughter, who wants to be an engineer. They forced her to leave school in order to flee. Life was getting too dangerous, Hussein said.

Other refugees said they didn't want to remain in Austria either. One said he wanted to go to Belgium; another said he had friends in Finland. A woman said she wanted to get her son medical help in Germany, where she also has friends.

None of the people at the Nickelsdorf waiting area had been fingerprinted yet; nor had any officials taken their names. The Red Cross's job, Minderl said, was to make sure they had food, drink and showers available. No one appeared to be concerned about whether they remained.