Budapest’s Keleti train station has been closed in an attempt to prevent migrants from fleeing to Austria and Germany. Refugees said they spent hundreds on tickets after police told them they could expect free passage. 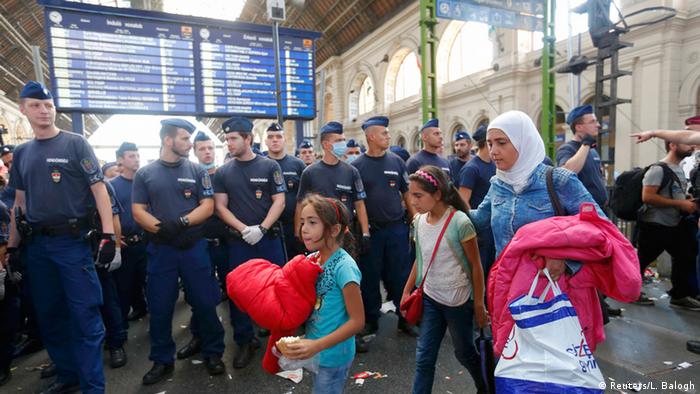 The main eastern train station in the Hungarian capital had no trains arriving or departing on Tuesday morning, preventing refugees from leaving for Germany only a day after police let hundreds travel freely to western Europe. The Keleti station announced that the shut down would continue until further notice.

DW correspondent Max Hofmann was outside the station as refugees began to protest:

Small scuffles broke out as hundreds of police, some in riot gear, began to move around 1,000 people chanting "Germany, Germany!" out of the city's most important station.

In Vienna, police reported that 3,650 migrants had arrived at the Westbahnhof train station on Monday, with most continuing on to Germany.

Many however, were still waiting on Tuesday to make their way to Munich:

The situation prompted Austria to call on Germany to declare a clear stance on how it will handle the massive waves of refugees after Berlin declared last month it would grant asylum seekers from Syria special status, in spite of the Dublin Regulation which requires migrants to be registered in the first EU country they arrive in.

"There were rumors that Germany is even sending trains to Budapest to pick up refugees. It is all the more important, that Germany informs refugees in Hungary that Dublin has not been suspended," said Austrian Interior Minister Johanna Mikl-Leitner.

Balkan asylum seekers to be deported

The confusion in Budapest and Vienna came the same day Germany's state of Bavaria opened the country's first registration center specifically for migrants from Balkan countries. Authorities expect around 500 migrants from eastern Europe to be housed there as they await deportation, on the grounds that they have no right to claim asylum in Germany.

A total of about 1,500 would-be refugees are expected to pass through the center, and two others like it, in the near future. Every responsible government agency and office has prepared for close collaboration so that the Balkan migrants can be sent back to their countries of origin quickly.

Of Germany's nearly 200,000 asylum applications received between the beginning of January and the end of July 2015, 15.3 percent, or around 30,000 of those applications came from Kosovo alone, according to government statistics. Another 15 percent came from Albania and around 6 percent from Serbian nationals.

The ruling CSU (Christian Socialist Union), the Bavarian sister party to Chancellor Angela Merkel's CDU (Christian Democratic Union), has plans to erect the second center just for Balkan asylum seekers near the city of Bamberg in the coming months. The CSU has refused to back down on the plan since deciding upon it in July, despite criticism from the rest of the country.

In an interview with Germany's ZDF broadcaster, Bavaria's Interior Minister Joachim Hermann defended the state's actions, calling it a matter of "efficiency."

Hermann also took the opportunity to reaffirm Berlin's stance on Syrian migrants, saying that any who arrive by train from Budapest would not be sent back to Hungary.

The EU needs immediate action to deal with the influx of immigrants, the interior ministers of Germany, France and Britain have said in a statement. The three countries urged new "hot spots" for registration of refugees. (30.08.2015)

Budapest asked for Germany's clarification on Schengen travel rules, as most migrants cross into Hungary and then head for northern Europe. Berlin later reaffirmed that people should apply for asylum in Hungary first. (31.08.2015)