Indonesian society splinters under conservative draft laws | Asia| An in-depth look at news from across the continent | DW | 03.10.2019 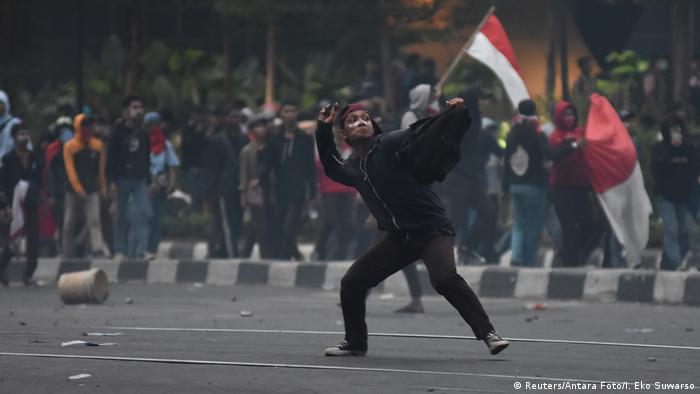 For International Safe Abortion day, "Gerakan28September" (the September 28th movement) organized an event in the backyard of the Sangkring Art Space in the Indonesian city of Yogyakarta. However, it won't be full tonight — the topic is probably too difficult for many Indonesians.

In between colorful art exhibits, there are information stands for victims of sexual assault, on reproductive health and how to sew sanitary pads. Bands play protest songs and the mood is emotional.

Some attendees have punk haircuts and are getting new tattoos, while others wear conservative headscarves and flowing gowns. But they have one thing in common: They want to make decisions for themselves about their bodies.

"These issues are still taboo in Indonesia," said artist and event organizer, Fitriani Dwi Kurniasih. "It is important to provide education on unwanted pregnancies and safe abortions, otherwise those affected will go to a local healer without knowing the risk."

Soon this may no longer be possible in Indonesia. A draft of a new criminal code in Indonesia would, among other things, ban the provision of information on abortion and criminalize sex outside of marriage. This will affect the lives of unmarried and homosexual couples, along with people in non-traditional living situations.

"The state is becoming far too involved in the private lives of citizens," said Hera Diani, editor in chief of the feminist publication Magdalene. Diani said the section of the law on reproduction and contraception was especially problematic.

"It states that health consultants, or even parents and teachers, could be punished for educating their children about sex  —  that's ridiculous, " she said.

Indonesia is currently facing multiple crises. Since last week, tens of thousands of students have taken to the streets across the country in protest. The demonstrators have multiple complaints: There is a new law that could weaken Indonesia's anti-corruption body, there is ongoing violence in West Papua province, and the government has not taken enough action in the face of massive rainforest wildfires.

However, the proposed new criminal code, abbreviated RKUHP, is driving the protest movement more than anything else. The sections on morality affect the personal lives of many Indonesians — especially the younger generation.

Popular Hashtags in Indonesia these days include #semuakena (it affects everybody) and #tolakrkuhp (reject RKUHO).

In Yogyakarta, a city of 388,000 people on the island of Java, protests flow from three directions onto Gejayan crossing. Here is where twenty years ago, an older generation fought for Indonesian democracy.

The protesters hold colorful signs with statements like: "My sex life is none of your business" and "Don't throw us in jail for love."

But despite the funny statements, and their proper student uniforms, these protesters are serious. The demonstrations are the biggest in Indonesia since those that forced former dictator Suharto to step down in 1998.

And although the demonstrations in Yogyakarta have remained peaceful, in many other Indonesian cities there have been clashes on the street with riot police.

Indonesian President Joko Widodo has obviously taken the protests seriously, as he has postponed adoption of the bill. This irked members of parliament, as the delay passes the proposal to a new set of lawmakers entering parliament on October 1.

Without the delay, the bill would probably have passed. In the new parliament, some members remain, while a few of the conservative hardliners have been replaced. New coalitions are being formed and the future of the law should depend on negotiations behind the scenes.

Women on top in Sumatra

Women on top in Sumatra

Indonesia is 'not the West'

For 46-year-old law professor Eddy Hiariej, it seems quite natural that such an important legal reform would unleash controversy in multicultural, multiethnic Indonesia. Hiariej teaches at Yogyakarta's renowned Gadjah-Mada university, and he is a frequent guest on Indonesian talk shows.

With a smile and remarkable eloquence, Hiariej stresses that the criticized paragraphs are only a small fraction of a larger body of legislation that has been in the works for over 50 years. Former Indonesian criminal law was transformed from that based on the Dutch colonial era.

The professor emphasized that many critics have not read the law correctly, and many sections are not as strict as they appear on first glance.

However, Hiariej warns against drawing parallels with Germany or other societies in the West.

"We have to compromise. Something like LGBT+ doesn't fit in our culture. Muslims make up a majority of our country, and we must respect their values," said Hiariej, who is a Muslim from the city of Ambon.

Women no longer being allowed to go out alone in the evening would be one of these "compromises."

"It is a form of protection from the state for the individual," said Hiariej. "Women are very vulnerable as victims, so we really need to protect them more." 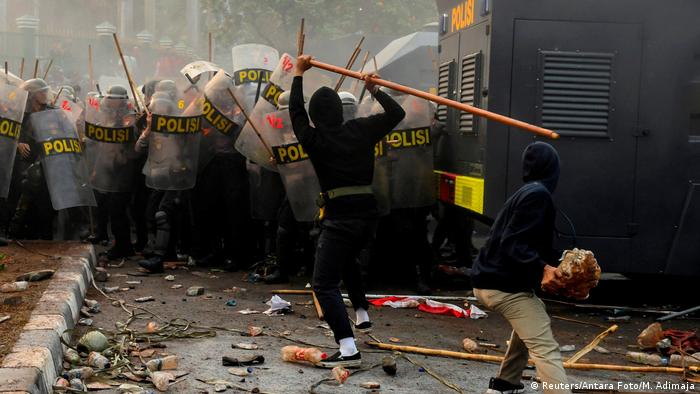 At least two protesters have been killed since September 24

Indonesia's future belong to the young

Fitriani Dwi Kurniasih doesn't share Hiariej's perspective. The 39-year-old artist is often out at night, going to exhibitions or performing with her band. If the law is passed in its current form, going out would be hardly be possible, and working with her art collective, "Survive Garage" would be severely limited by a quasi-curfew for women.

"I am afraid that all events at night will again be dominated by men," Kurniasih said. "We have tried to create a space, which is especially open to women, but where everyone is equal," said the volunteer activist who is works with different rights groups.

"Surely this will also affect our homosexual friends. It is becoming increasingly difficult for them to have their needs heard."

The night before the Gerakan28September event, Kurniasih performed on a small stage in front of a wall colorfully painted by the Survive Garage. She sings about the discrimination of ordinary people, social injustice and environmental degradation.

The concert is part of climate strike week in Yogyakarta, which has been somewhat overshadowed by the massive student demonstrations.

The crowd is mostly young people with alternative lifestyles. Some of them come from different provinces, some of them from abroad. Nobody stands out for looking different or loving someone of the same sex.

"Considering the current situation, my hopes for the future are indeed utopian," said Kurniasih. "But when I look at the current student movement, I get pretty optimistic. They are very active, and very brave."

Hera Diani also has high hopes for the next generation. "Up to now, I thought young people weren't critical. But now they are shaping a movement and can express their opinions," said the 42-year-old journalist who was part of the 1998 student protests.

Diani does not doubt that Indonesia needs a new criminal law, but she thinks the population must be involved first.

"It must not be negotiated behind closed doors, we must continue to reject the draft law until it is no longer problematic — and women and other minorities are not criminalized."