Exiled West Papuan leader: 'A referendum is the only solution'

DW spoke with Benny Wenda about escalating conflict in Indonesia after authorities called Papuan students monkeys. Wenda said the region has been colonized twice over with epidemic police brutality and military violence. 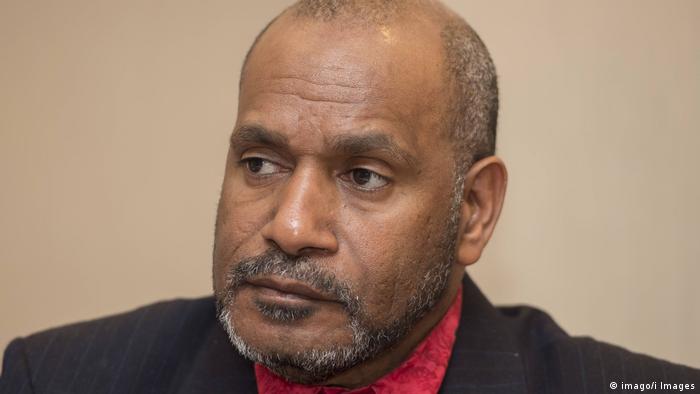 Benny Wenda, chairman of the United Liberation Movement for West Papua and founder of the Free West Papua Campaign, has rebuked claims that protesters calmed down over the weekend and said the people of Papua would not rest until Indonesia grants them a referendum, but authorities have ruled out such a possibility.

The exiled Wenda spoke from his home in Britain about Indonesia's problem with police, military and militia violence, which has driven him and other West Papuans to demand independence.

"Systemic discrimination is rooted in Indonesia's military and police," Wenda said. "They kick and beat us and keep calling us 'monyet' (monkey)," he added. "It's the mentality of the military and police. Other people copy it, but no one ever talks about it."

Wenda's call for a referendum comes in the wake of the 20th anniversary of East Timor's successful vote for independence from Indonesia.

'We do not feel Indonesian'

West Papua is located on the island of New Guinea and borders the independent country of Papua New Guinea. It is the only Indonesian territory situated in Oceania. The mineral-rich region also hosts one of the world's largest tropical rainforests.

The territory has witnessed renewed civil unrest in the last two weeks over perceived ethnic and racial discrimination.The former Dutch colony was incorporated into Indonesia in 1969 after a UN-sponsored ballot seen as a sham by many.

Wenda calls Indonesia's taking over of West Papua an "illegal occupation" and said that "there are no historical or linguistic connections" between the two.

Since then, a low-level insurgency from a separatist movement has called for self-determination for the region, having grown more vocal in recent weeks.

Read more: EU vs. Indonesia: Is it really a trade war? 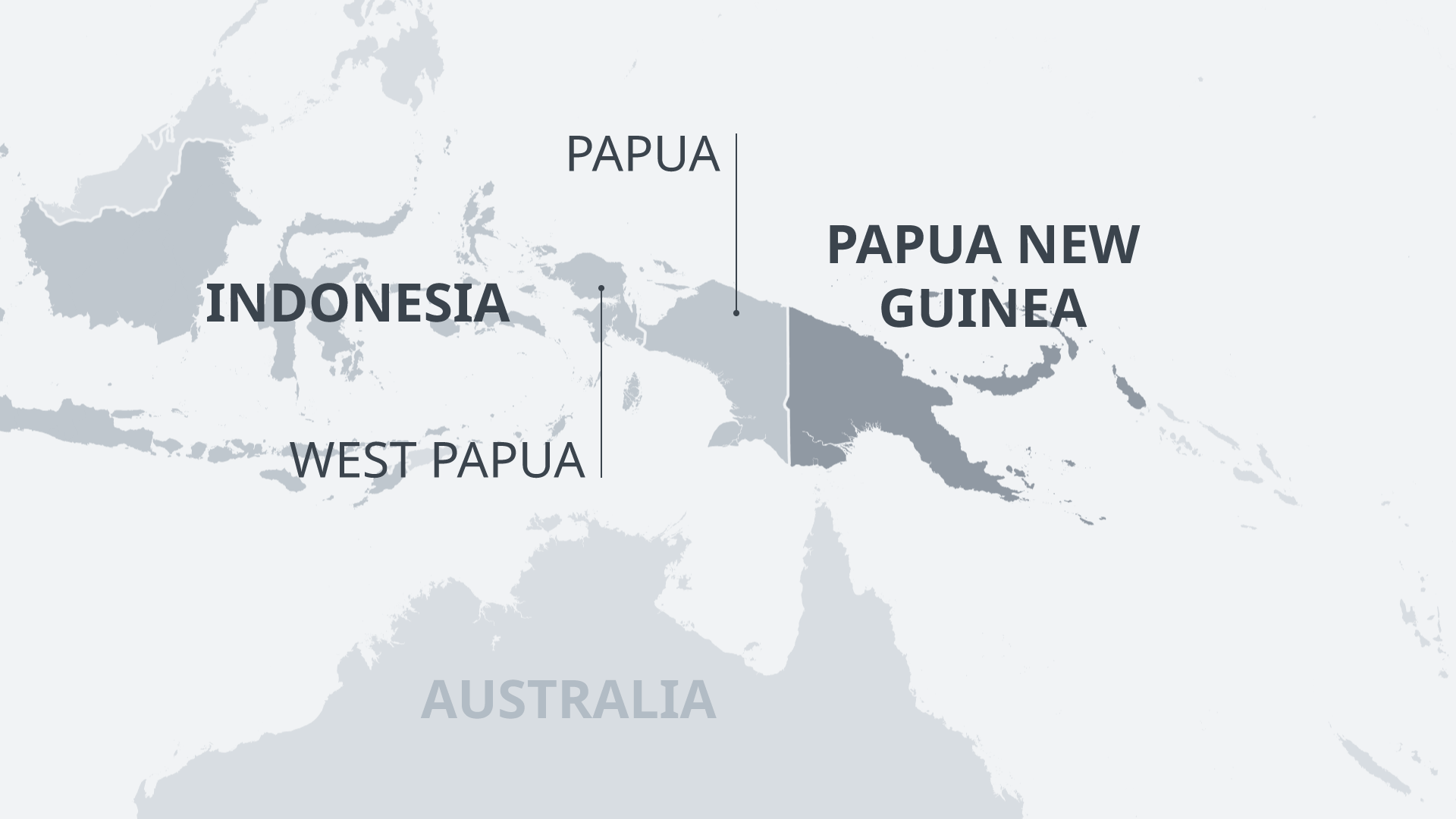 West Papua is located on the island of New Guinea and borders the independent country of Papua New Guinea.

Indonesian police arrested dozens of people in Papua following protests in which buildings were set ablaze, a police spokesperson said on Sunday.

In Jayapura, 28 people were arrested and named as suspects while two students in Jakarta were arrested on suspicion of crimes against state security.

In a region that already has a heavy military presence due to decades of separatist conflict, Indonesia deployed around 2, 450 extra personnel, with half of them arriving over the weekend.

Wenda warned that a militia group recruited by Indonesian intelligence is already forming in Jayapura and has called for UN intervention to avoid a "Santa Cruz-like massacre." The 1991 massacre saw the killings of over 250 East Timorese pro-independence demonstrators. 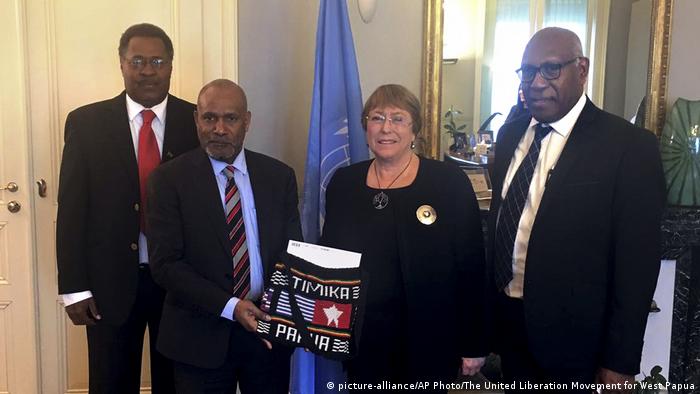 Benny Wenda, pictured with the UN High Commissioner for Human Rights Michelle Bachelet, has called upon the UN to intervene

Authorities targeted Papuan students after allegedly seeing an unraised Indonesian flag outside their student dorm in Surabaya. Some allege that the flag was ripped, while others claimed the flag was found lying on the ground or in the sewer. After a failed break-in, authorities reportedly shouted the racist slurs and called upon Indonesia's anti-terrorist unit to invade the dorm.

According to Wenda,  local sources informed him that upon their release, the students locked themselves back in the dorm, refusing to leave until Indonesia grants West Papua independence.

Authorities imposed an internet blackout in the region in a move to stop the spread of racist messages and misinformation, officials said.

Britain granted Wenda political asylum in 2003 following his escape from custody while on trial in West Papua on politically motivated charges. After police tortured him while in confinement, activists smuggled him to neighboring Papua New Guinea where a European NGO assisted his travel to the UK.

Wenda has since been nominated for the Nobel Peace Prize and is a recipient of the Freedom of Oxford, recounting stories of when military appeared in his remote Lani village in 1977 and carried out tirades of violence including enforced subservience, rape, and the genital mutilation of villagers.

Wenda explained to DW that Indonesia suffers from the systematic racism that stems from the core of its colonial roots.

"They see themselves as superior…like the colonials used their power they put down Papuans… they still have a colonial attitude towards Papuans…" Wenda said that authorities regularly target, beat, and kill those who are "black" or "with that beard."

He explained that Indonesian authorities have adopted the discriminatory behavior and mentality from their former Dutch rulers and are now abusing their newly-gained power to oppress Papuan minorities. He gave examples of current injustices passed down by colonial traditions and laws such as the banning of Papua's independence flag.

"The Dutch also imposed racism on other Indonesians, that legacy still carries that…racism, everything, they copied that from the Dutch…they are not a colony anymore, but they still want to colonize my people."

Indonesia's chief security minister on Friday urged protesters to calm down, saying that demands for an investigation into racism had been met.

"Why must we kill each other because we're offended?" said Wiranto, Indonesia's Coordinating Minister for Political, Legal and Security Affairs.

However, Wenda said that despite everything, Indonesian authorities continue to use racist slurs against Papuans and that the military has begun jailing peaceful protesters.

When asked about the prospect of a future independent West Papua, Wenda acknowledged he cannot be naive that Papua will be a guaranteed success story. However, he said that he does believe that the situation cannot become worse for Papuans who are currently "treated as animals and second-class citizens" and "beaten regularly" under the central government.

Wenda remains adamant that a referendum is the only way forward for West Papua and said that he feels "confident" about the prospect of an independent leadership in the region.

"We have already been a united government for five years…Indonesia is scared because before we were divided." 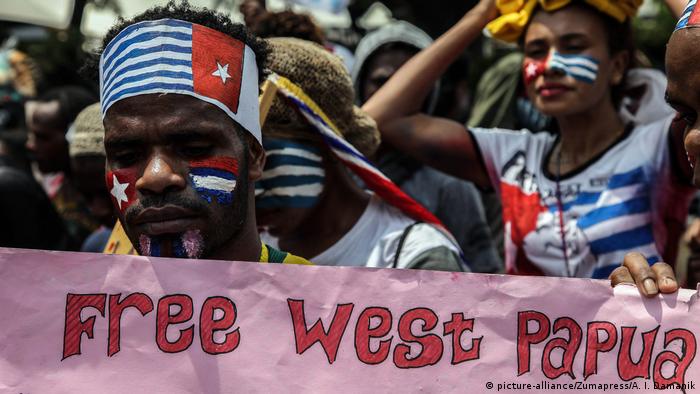 "Indonesia will never grant independence if there is no pressure from international communities because of West Papua's resources," Tabuni said, adding that Indonesia and countries including the US and the UK benefit from multinational cooperation interests in the region, in particular mining groups.

When asked about possible challenges of leadership, corruption, land and resource distribution, Wenda said that after fighting for years for independence and observing other countries such as South Africa, West Papua "has already learned the good and the bad."

"Our leadership will sustain our country," he said, adding that West Papua's determination for environmental sustainability and the protection of the planet's natural resources will serve as a global example.

Wenda acknowledged that the region's richness in natural resources will make it very difficult for Indonesia to let go of West Papua, but still believes in an independent future.

"Many countries have been given the right to a referendum …a fair referendum is the democratic will of the people. Indonesia is a UN body; they cannot oppress people in the 21st century."

Dutch to apologize for 1947 Indonesian massacre

The Netherlands has announced that it intends to officially apologize to its former colony of Indonesia for the scores of executions carried out in 1947 by the Dutch army. (05.12.2011)