A large number of Indonesians want Shariah to be implemented in their country and support women donning the hijab, says a new survey. It comes amid fears that Islamist groups are gaining more traction and visibility. 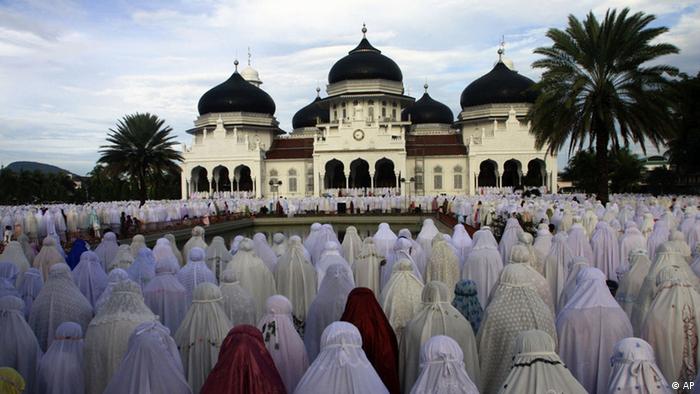 A significant proportion of the Indonesian population supports the implementation of Islamic law, Shariah, in the Muslim-majority Southeast Asian nation, a nationwide study recently found. The survey commissioned by the ISEAS-Yusof Ishak Institute in Singapore found that 82 percent of the 1,620 respondents also considered the wearing of the hijab or Islamic headscarf an important outward sign of Islamic religiosity for women.

The survey results come amid growing concerns about the role of religion and rightwing Islamic political activism in Indonesia, which is home to the world's largest Muslim population numbering over 200 million.

"Indonesians are part of the global Islamic revival, which is a trend toward increasing religiosity and social identification with Islam," said Jeremy Menchik, an Assistant Professor at Boston University focusing on comparative politics, religion and politics in Southeast Asia and the Middle East.

"The Islamic revival originates in part to popular frustration with the moral vacuity of secular liberalism and capitalism. In search of more meaningful connections, many Indonesians have looked toward Islam," he told DW.

Zachary Abuza, a Southeast Asia security expert and professor at the Washington-based National War College, agrees that religiosity and displays of piety are clearly growing in Indonesian society.

He explains that the growth in religiosity is part of a several-decade process that began in the 1980s when the then Indonesian dictator Suharto started to lose legitimacy and began to play up the role of Islam and Islamic institutions in a bid to enhance his declining popularity.

"Now politicians pander to the Islamists and don't challenge their creeping 'Shariaization' through public policy," Abuza told DW, pointing out that the blasphemy law and Islamist vigilante groups have abused free speech rights and intimidated and silenced opponents in recent years. Also, once secular institutions such as the military or police are less so today.

Part of the reason for this increased Islamization of society and public institutions can be attributed to a steady stream of money and personnel flowing from Saudi Arabia into Islamist educational institutions in the Southeast Asian nation, Abuza stressed.

Rachel Rinaldo, a cultural sociologist focused on Muslim societies at the University of Colorado Boulder, says it's very important to be cautious about some of the findings in the recent survey. She believes it's actually difficult to say if there has really been an increase in religiosity in Indonesia.

"The data on religious values and practices in Indonesia doesn't go back very far in time so we don't have a very good basis for comparison. It also depends a lot on how we define religiosity. If we define it as believing in a god, Indonesians have probably been quite religious for a long time," Rinaldo told DW.

The expert, who has conducted fieldwork in Indonesia since 2002, reckons that what has changed in Indonesia over the past few decades are different ideas about what it means to be religious and how to be a Muslim.

"In recent years, there is certainly more pressure to conform to religious practices considered Islamic, such as wearing the hijab, or performing the five prayers at the recommended times, attending Quranic study classes," said Rinaldo. "Indonesian Muslims are now much more likely to do those kinds of things than in the past, but whether that really means that they are more religious is an open question."

The ISEAS-Yusof Ishak report said that almost 80 percent of Indonesian Muslim women surveyed wear the hijab. Interestingly, it revealed that wearing the Islamic headscarf is becoming more common in women with higher education and income.

"Not only does it seem that wearing the hijab has become an accepted outward sign of Islamic religiosity for women in Indonesia, it may have also come to be associated with social status for Muslim women," the study noted.

But Rinaldo said she would be cautious about the figure of 78.2 percent of female Muslim respondents who say they wear the hijab. "This number seems very high to me, both based on my own experience, and on recent data."

She pointed out that the Transition to Adulthood in Greater Jakarta Survey from 2014 found that 37 percent of female Muslim respondents wear the hijab. "I am not sure what to make of the discrepancy between the two surveys, but I am not convinced that almost 80 percent of Indonesian Muslim women wear the hijab."

Indonesian Muslim women wear the headscarf for many different reasons including fashion, modesty, social pressure and individual choice. There is no single reason for wearing a headscarf. "Certainly, Indonesia has gone through much change with respect to women's clothing, though I would argue that the major changes occurred in the early 2000s," said Rinaldo.

It has indeed become very widespread for Muslim women to adopt some form of modest dress, very often including the hijab, she underlined. "There is certainly social pressure, including from other women, to wear the hijab, and in some regions of the country there are regulations requiring it."

Amid cheering crowds, two men in Indonesia's Aceh province have been caned repeatedly as punishment for gay sex. While the incident has grabbed global headlines, it's not an isolated one in the Shariah-ruled province. (23.05.2017)

'Indonesia among the best economies in the G20'

In an interview with DW, Indonesian Finance Minister Sri Mulyani Indrawati emphasized that compared to Europe, Indonesia's economy is benefiting from a combination of a young population and effective fiscal policies. (07.07.2017)

The blasphemy ruling against Jakarta's Christian governor Ahok is an alarming signal for Indonesia, as it shows how far radical Islamist positions have infiltrated the nation's politics, says DW's Thomas Latschan. (09.05.2017)

But experts point out that it's also important to recognize that Islamic dress has become very fashionable over the past decade.

It was evident last week in New York when up-and-coming Indonesian designers showcased stylish hijab and abaya designs at a fashion week. "We're not oppressed and we just want to show the world that we still can be beautiful, stylish with our hijab on," 26-year-old designer Dian Pelangi was quoted by AFP news agency as saying.

Many Indonesian women want to wear it because it is stylish and modern, and there are different styles of Islamic dress, so women can choose among them, observers point out.

"In some cases, the main difference between Islamic dress and Western dress is simply that the woman covers her hair, and doesn't show bare skin on her arms or legs - but much else remains the same," said Rinaldo. "So, in Islamic fashion, we often see the same clothing styles that are current in other parts of the world, but just made more modest."

Indonesia is widely regarded as a country where most of its people practice a moderate form of Islam. While Muslims account for around 85 percent of the nation’s populace, there are substantial Hindu, Buddhist, Christian and other religious minorities. It's a diverse society composed of a number of ethnic groups with different cultures, languages and lifestyles.

But, in recent years, there are worries about growing intolerance as radical Muslims who have been trying to turn Indonesia into a strict Islamic state have gradually gained influence.

In the ISEAS survey, a significant number of Muslim respondents said they thought there would be various benefits if Shariah was implemented in their country. According to them, the most important benefit would be safeguarding moral values in society.

"Survey questions about religion and morality are notoriously tricky because they tend to elicit what people think they are supposed to say," said Rinaldo. Certainly the survey does seem to find a fair amount of support (39 percent) for imposing Shariah. But it's hard to know what people mean by Shariah, as there are very different interpretations of it, including within Indonesia itself, the expert noted.

Furthermore, Indonesian Muslims don't overwhelmingly vote for Islamic political parties in elections, which suggest that Shariah is not necessarily their primary concern. The authors of the survey suggested that Shariah seems to be viewed as a way to safeguard moral values.

In societies undergoing rapid social change, there is often a concern about safeguarding tradition and customs, so it's not too surprising to see this in Indonesia, which is less than 20 years into its democratization, Rinaldo explained.

"There is a sense that Shariah is tied to morality," said Abuza. But Islamist parties also benefitted from rampant corruption of secular parties, and weak political institutions that could not stem the corruption. "Of course, once in positions of power, Islamist parties proved not to be immune from corruption. Nonetheless, the public still tend to view them as being cleaner."

While Indonesian Islamist parties have only had limited success at the national level, they do govern at the local level, and they are gradually implementing their social agenda. Since 1998, over 440 local laws have come into effect, imposing elements of Shariah, such as mandating women to wear headscarves or restricting alcohol sales.

"Islam in Indonesia has certainly become more politicized, and political figures are becoming more likely to ally themselves with conservative and even extremist Muslim organizations that support measures like Shariah," said Indonesia expert Rinaldo.