Increasingly desperate North Koreans defect to South Korea | Asia| An in-depth look at news from across the continent | DW | 12.07.2017

South Korean media reports a surge in North Korea defections across the heavily fortified border. Desperation with the Kim regime and Trump's pressure over ballistic missiles could be the reasons. Julian Ryall reports. 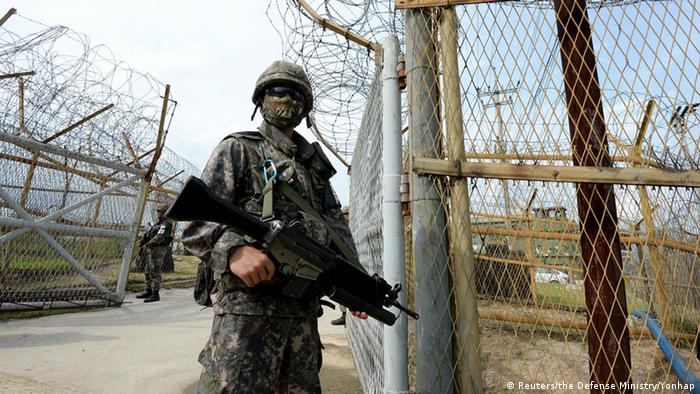 In an average year, maybe one North Korean defector will brave the land mines, tripwires and machine guns that are trained across the Demilitarized Zone (DMZ) that divides the two Koreas in a bid for freedom. The hazards are formidable and there are no statistics available for the number of people who die in their attempt to flee their repressive homeland.

Similarly, some half-a-dozen defectors will take to small boats on either the east or west coast of the peninsula and turn the bow towards the bright lights of South Korea. Again, there are no figures on how many are recaptured by North Korean border guards or who die at sea. 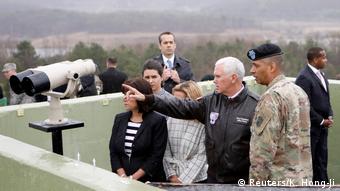 In June, however, no fewer than three North Korean soldiers have negotiated the DMZ and handed themselves into their South Korean counterparts, while seven civilians have been rescued from rickety boats after making a perilous crossing into the South's waters.

Read: North Korean defector: 'I am still not free'

South Korean media reported that one of the defectors was not a low-level conscript or hungry farm laborer, but one of the regime's elite.

A small fishing boat was intercepted off the east coast of the peninsula on July 1 by a South Korean coast guard vessel. The boat was carrying five people, including a graduate of North Korea's prestigious Pyongsong Institute of Science, his son, his son's girlfriend and two members of his brother's family. The man's son and his girlfriend are also graduates of the same university and, as they were considered the elite in North Korean society, all were permitted to live in Pyongyang.

Media reports suggest the defectors had become disillusioned with life in the North after Kim Jong-un came to power in late 2011, and traveled to Wonsan to buy a fishing boat and escape.

"There are several reasons why we are seeing an increase in people trying to defect in general, but it is surprising to see so many in such a short time trying to come directly to the South because that is by far the hardest route," said Song Young-chae, a member of the Worldwide Coalition to Stop Genocide in North Korea NGO.

"We have heard that there are worsening tensions in North Korea and more and more freedoms are being taken away from people," he told DW.

"Economically, the regime appears to be doing quite well at the moment, but politically people sense that it is very unstable," he said.

A large part of that is down to the increasing international pressure on Kim Jong Un's government over its continued development of ballistic missiles and nuclear weapons.

Read: What next after North Korea's 'ICBM test' - diplomacy or armed confrontation?

Last week, Pyongyang hailed the regime's most recent launch - its first viable intercontinental ballistic missile - as a triumph that will enable North Korea to strike a target "anywhere in the world."

And even though foreign media and contact with people abroad are banned in North Korea, word has got through to the nation's citizens that the rest of the world is horrified at the thought of a nuclear-capable North Korea. Through mobile phones and smuggled data devices, they will also know that US President Donald Trump has vowed that Pyongyang will never be permitted to deploy weapons that threaten the US.

Yet another factor that may be encouraging people to flee is the early summer drought that has severely affected crops, with the key farming regions of North and South Hwanghae Provinces particularly badly affected.

US warns China over North Korea

US warns China over North Korea

School pupils are being ordered to miss school classes and take to the fields to water crops by hand and new wells are being excavated, but there are serious concerns that the crops will fail and there will be widespread hunger across the nation in the coming months.

Already there are signs that hardship is coming, with the price of one kilogram of rice soaring from Won 5,000 (€33.53) two weeks ago to W6,000 (€40.25) in some markets last week. It is possible that some farmers are keeping back some of their crop for the winter months.

"It is very difficult to conclude that these recent defections are a pattern because we just do not have enough information at the moment," said Park Sokeel, director of research and strategy at the Liberty in North Korea NGO.

"But overall, people want to leave primarily for political reasons, because they are becoming more aware of the world outside North Korea, they are increasingly seeing the backwardness of the North and they know about the freedom and wealth that it available in the South," he told DW.

"And for anyone just on the other side of the DMZ, they can almost smell the wealth that is in the South, they can see the lights and they know that there is no oppression," he said. "That must serve as a powerful pull to those that do take the risk of coming to South Korea."

My picture of the week | Frightening message from North Korea