In Estonia, Merkel and Roivas talk Russia and internet | Europe | News and current affairs from around the continent | DW | 24.08.2016

In Estonia, Merkel and Roivas talk Russia and internet

Angela Merkel's visit to Tallinn comes at the time when Germany has taken more interest in Estonia. The two countries share a long history and are cooperating on EU, security and digital affairs. 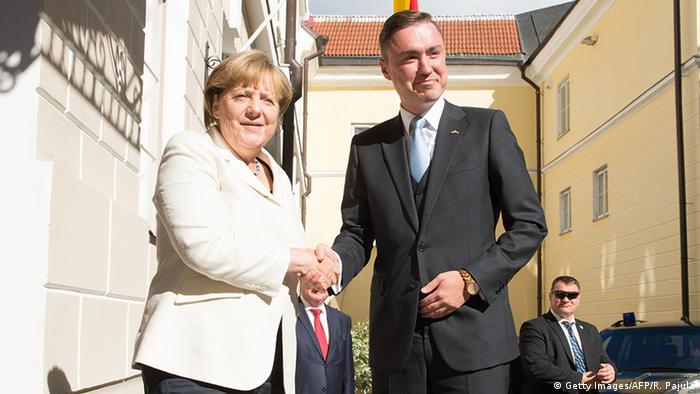 Merkel and Roivas in Tallinn

Thursday's visit to the St. Mary's Cathedral in the Estonian capital, Tallinn, gave German Chancellor Angela Merkel a chance to look back on Europe's history. On display, the cathedral has three letters Martin Luther wrote regarding the sending of preachers to Tallinn.

The countries share a long history: The Baltic German nobility was in charge of Estonia for over 700 years, and German was the official language until Estonia's independence in 1918. 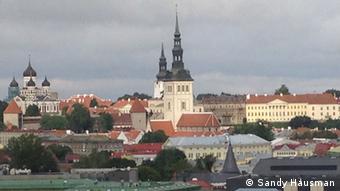 Since Estonia regained independence from the Soviet Union 25 years ago, dialogue between the countries has increased again.

As chancellor, Helmut Kohl had played a major part in convincing Russian President Boris Yeltsin to withdraw troops from Estonia in the mid-1990s.

Today, almost 2,000 Germans live in Estonia. The Goethe-Institut, a nonprofit cultural association, operates a branch in Tallinn - albeit one of the smallest of its 159 outposts worldwide - to promote German language and culture.

Staunchly pro-EU, budget-disciplined, and oriented toward business, Estonia has become a loyal political and economic ally to Merkel's government. 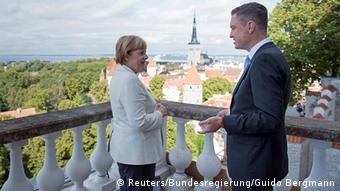 A balcony with a view for the chancellor and her host

And the European Union is high on the agenda during Merkel's visit. "The main topic of our meeting is the future of the EU," Estonian Prime Minister Taavi Roivas told DW. "There are some fundamental issues to be clarified: where Europe is going, which values we want to hold on to and protect, and the choices to be made for the sake of a strong and functioning union."

Estonian officials are looking for German military support. After Russia's 2014 annexation of Crimea and subsequent military incursions into Ukraine, Estonian officials grew concerned about their eastern neighbor again. Memories of the long occupation by Soviet Russia are still relatively fresh.

Although Estonia joined NATO in 2004, it wasn't until Russia's most recent aggression that the decision to commit multinational troops to the Baltic states was made.

At this summer's summit in Warsaw, NATO approved the deployment of battalions to Estonia, Latvia, Lithuania and Poland. At the summit, Prime Minister Rõivas and Chancellor Merkel set a date for her visit. 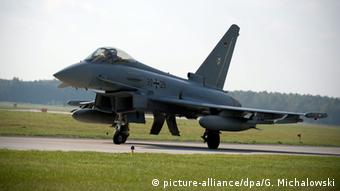 German fighter at the Amari air base

Germany will send up to 1,000 soldiers to Lithuania, and a Bundeswehr unit arrived in Estonia last month, where it is participating in exercises and will remain through the end of September. German special forces participated in a recent training exercise against terrorism in Estonia.

Germany's air force has repeatedly taken responsibility for patrolling the skies over Estonia, Latvia and Lithuania as part of the NATO mission - the Baltic states do not have their own airborne defense capabilities. German jets will return to Estonia's Amari Air Base again this September.

Apart from the security matters, Germany and Estonia have initiated digital cooperation. 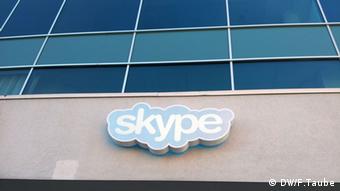 Skype was invented in Estonia

In May, Merkel had invited her Estonian counterpart to a German government meeting in Meseberg. At the meeting, Roivas presented a report, introducing the Estonian e-government and the nation's experience in cybersecurity.

According to Siim Sikkut, a digital policy adviser with the Estonian government, the Germans were genuinely intrigued - the planned one-hour meeting stretched over two hours. The constructive interest of German cabinet members was mostly focused on how to attract more people to use digital opportunities based on Estonia's experience.

Roivas is optimistic. After meeting with Merkel in Tallinn on Wednesday, he said pooling Estonia's expertise in information technology with Germany's industrial power "could give a new impetus to Europe's economies."

Merkel will speak on digital cooperation between the countries and receive a briefing on how Estonia's electronic services, such as the digital signature, work in practice.

On Thursday, Prime Minister Roivas will present Merkel with an e-residency card - allowing the chancellor to become a digital resident and try out Estonia's digital solutions firsthand.

NATO Secretary-General Jens Stoltenberg has announced that the military alliance will deploy battalions in the east. The move comes amid growing fear over Russian encroachment. (13.06.2016)

Digital Estonians: E-residency as the way of the future

Estonia has managed to live up to its declared intent of pioneering the first borderless digital society. Its e-residency program has proved to be a success half a year after its conception. (07.08.2015)