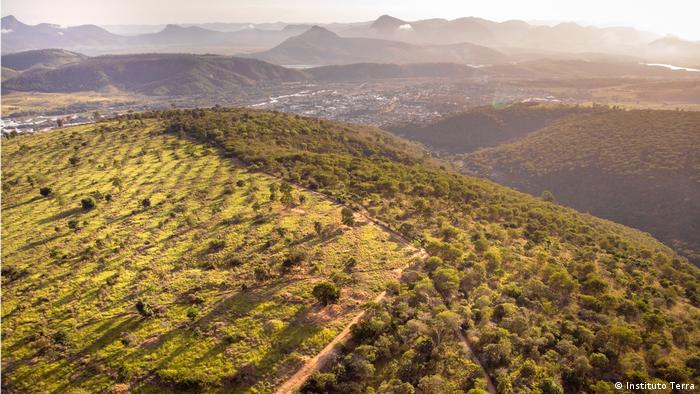 Endless rows of saplings stretch peacefully up toward the blue sky over the village of Aimores, in Brazil's southeastern state of Minas Gerais. Here at the Instituto Terra nursery, as many as 1.2 million seedlings from some 100 different types of local trees are planted each year.

The forests on the hillsides surrounding the old cattle ranch are gray and bare at the moment due to months of drought, but when the rainy season begins in November the area will transform into a sea green. 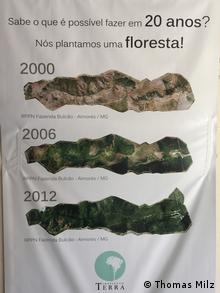 Satellite photos on a poster on one farmhouse wall clearly illustrate the changes that have taken place at the 700-hectare (1,730-acre) conservation area over the years, ever since it was founded in 1999 by photographer Sebastiao Salgado and his wife, Lelia Wanick Salgado.

In 2000, it was nothing but a patch of brown dirt. Six years later, the hills were predominantly green, and by 2012 there was already a lush blanket of Atlantic rainforest.

"We measure success by the fact that the forest is back, that once dry springs are bubbling again and that the animals have returned," says Isabella Salton, executive director at Instituto Terra.

"The better the situation became, the more suitable it became for wildlife, the more the animals began to appear. You can find birds here, mammals, reptiles, amphibians, everything. You can even find endangered species here at the farm."

For Salgado, 75, the farm represents the biggest project of his long and impressive career. He says his love of nature stems from a traumatic experience he had after completing a long and difficult photo project on migrants and refugees in 1999.

"I was sick. I was not well. I had lost faith in our species," he told Canada's The Globe and Mail newspaper in 2015. "It's very difficult for us to survive as a species. We are too violent, too egoist … what I saw made me lose faith." He decided to take a break from photography.

At the time, Salgado and his wife — who were living abroad — inherited the farm in Brazil from his parents. He was shocked when he discovered that nothing remained of the magical forests he had played in as a child, the place where he first discovered the magical interplay of light and shadow. Intensive livestock farming, deforestation, drought and erosion had turned the family home into a lunar landscape.

"When we inherited this piece of land it was as wounded, as dead, as I was," he says. "Once it had been an ecological oasis. When I was a child, half the farm was forest — I grew up in paradise. But when we arrived less than half a percent of the land was wooded."

One day, Salgado says, his wife suggested that they "rebuild paradise," just like it used to be. With the help of wealthy friends and sponsors, the Salgados began to do just that.

Salton says locals were perplexed at the time, because it was common practice to clear-cut forests to make space for grazing animals or crops.

"It went against everything they had been taught to think," says Salton. "Today, with all of the droughts and climate change, farmers are suffering, especially from lack of water. Now they are finally beginning to get it."

Instituto Terra now delivers most of its saplings to regional farmers looking to replant forests, in part to help restore lost sources of water. The institute also teaches young people about sustainable forestry, so they can help to replenish the wooded areas at their own family farms. 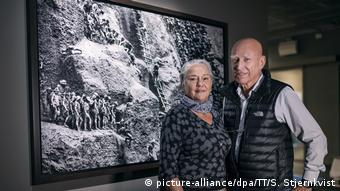 Salgado, seen here with his wife Lelia, is known for his striking black-and-white photographs

Salgado's focus on nature has renewed his hopes for the world, and for humanity. "As I witnessed how strongly and elegantly life began to return [to the farm], I began to believe that there may be a way forward, that there may be hope … for our planet," he says.

That newfound optimism inspired him to create a monumental love letter to the Earth, his 2013 photo book Genesis, which features his black-and-white photography showing people displaced by war or climate disasters.

The German Publishers and Booksellers Association, which presented Salgado with its 2019 Peace Prize on Sunday, has described Salgado as an artist "who works for social justice and peace through his photographs and who lends urgency to the global debate on nature and protecting the climate." The prize, worth €25,000 ($28,000), is awarded for contributions to literature, science or art in support of peace.

"By describing his evocative black-and-white photographs as an 'homage to the greatness of nature' and showing the defiled Earth as well as its fragile beauty, Sebastiao Salgado presents us with the opportunity to understand the Earth for what it is: a habitat that does not belong to us alone, and that must absolutely be preserved," said the association.

"Over the next 20 years, before I die, I want to see this valley restored," Salgado said in 2016. "To see it once again as beautiful as it was at the beginning of the last century."

A lack of rain, soaring temperatures and droughts are posing a serious threat to Germany's woodlands. Foresters are doing what they can to save them, and the agriculture minister has vowed to help. (01.08.2019)

Indonesian farmers are planting trees to restore the country's threatened forests — and provide a sustainable future.