Foresters fighting to save Germany′s threatened woodlands | Germany | News and in-depth reporting from Berlin and beyond | DW | 01.08.2019

A lack of rain, soaring temperatures and droughts are posing a serious threat to Germany's woodlands. Foresters are doing what they can to save them, and the agriculture minister has vowed to help. 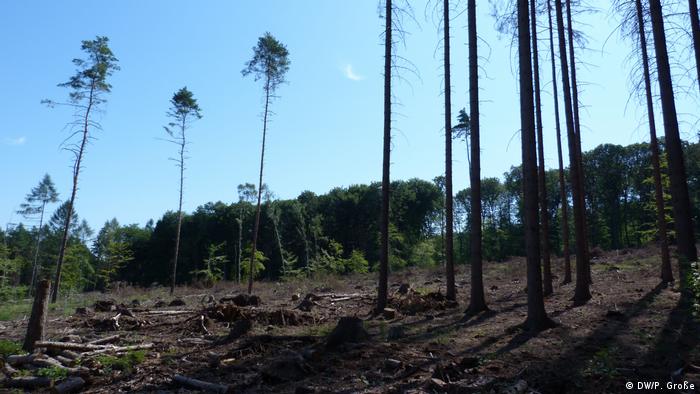 A few months ago, this region was densely covered in spruce trees. But today, there are only a few left. Most had to be cut down to save the forest.

Stephan Braun is a forester in charge of the municipally owned woods near the German town of Sinzig, in northern Rhineland-Palatinate. For 32 years, he has been in charge of these 900 hectares of forest. For much of that time, he has been waging a war on the destructive bark beetle. "Thirty years ago, 17% of our forest consisted of spruce trees," he says. But today, only 7% are left, and bark beetles are mainly to blame.

Braun heads to a tree on the outskirts of the denuded area, passing tree trunks and piles of loose branches. He takes a pair of glasses from his pocket and has a closer look. Bark beetles are not easy to spot. After a few seconds, he points to an area on the bark covered in minuscule holes. They are the work of the beetles. "Once they are inside, they dig tunnels and place their larvae," he says. When thousands of beetles do this at the same time, they kill the tree. "Sometimes, it will take just weeks for a tree to die," Braun explains. In that case, the spruce will lose its needles, the treetop will thin out and the bark will fall off.

"We have been fighting this phenomenon for 20 years now," Braun says as he walks to his car. But, he notes, "this problem was not as widespread then." Usually, trees have defense mechanisms for dealing with such parasites. The tree's sap and resin can repel beetles from burying themselves under the bark. But when there is a drought, trees become vulnerable. 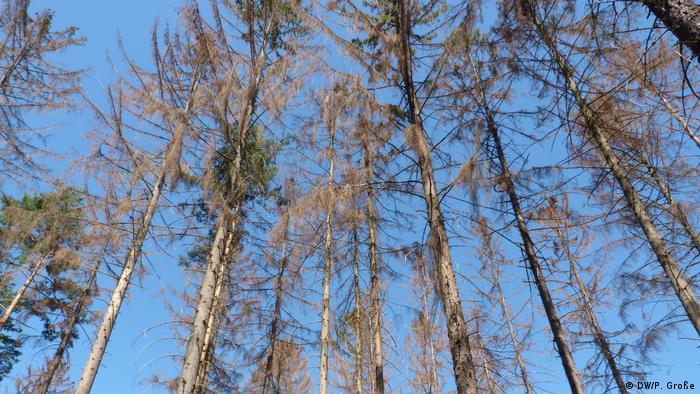 Bark beetles have been particularly damaging for Germany's forests

"The last two years were unusual," Braun says, noting it hardly rained between July and October last year. "A spruce tree can survive for 4 to 6 weeks without rain," he explains. After that, they become extremely vulnerable to bark beetles. This is why "climate change concerns foresters like us more than anyone else," Braun says. If droughts become the norm, bark beetles could destroy vast swatches of forest.

Given this looming danger, German Agriculture Minister Julia Klöckner plans to hold a national forest summit in September. "Our forests are severely damaged," she told German daily Rheinische Post. "Only by joining forces will we manage to tackle this huge challenge of saving our forests — which will benefit this and coming generations." Klöckner said this effort would not only entail millions of euros for reforestation efforts, but that the woods had to be adapted to climate change in the long term.

Once again, it is a hot, dry day. But there is no shade. Braun has had to cut down two hectares of forest since December, and he's not finished yet. Over the past 20 years, 10% of this forest has fallen victim to bark beetles — that is the equivalent of 90 hectares. This year alone, some 10 hectares were destroyed by the insect. It poses a serious problem for foresters and forest owners across all of Germany and Europe. The German government reports that 114,000 hectares of forest will need to be planted and restocked, as roughly 40,000 hectares have been devastated by bark beetles alone. 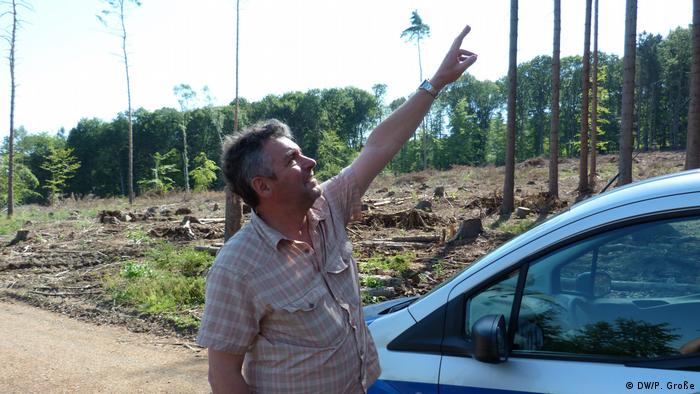 In the first six months of 2019, Braun recorded about 5,000 cubic meters of beetle-infested wood in Sinzig's forest. Even if trees are infested by the beetles just once and are otherwise healthy, they must be cut down immediately to stop the insects from spreading. Unfortunately, says a rather dejected Braun, "we do not have the capacity to actually do this." It would cost €2.1 billion ($2.3 billion) to cut down and remove all beetle-infested trees in Germany. Few forest owners have this kind of money.

'This is emotional for me'

Braun gets into his car and sets off. After several hundred meters, the denuded area gives way to lush forest. The trees block out much of the scorching sun. But upon close inspection, it becomes clear that bark beetles have wrought destruction here, too. Spruce tree needles have turned red and will most likely fall off soon, notes Braun. "The trees will not make it to winter," he says.

Braun says more and more trees need to be cut down to combat the beetles — a significant effort that in his opinion is not paying off. The European market for damaged timber is currently saturated, Braun says — the price for a cubic meter of wood has more than halved over the past two years. What's more, reforesting is costly. One hectare of new woods costs between €5,000 and €10,000. While towns such as Sinzig have the money to do this, "private forest owners will not be able to afford this," Braun says. This could pose a major problem for individuals or families who own forests, he adds. It could "threaten their livelihood." 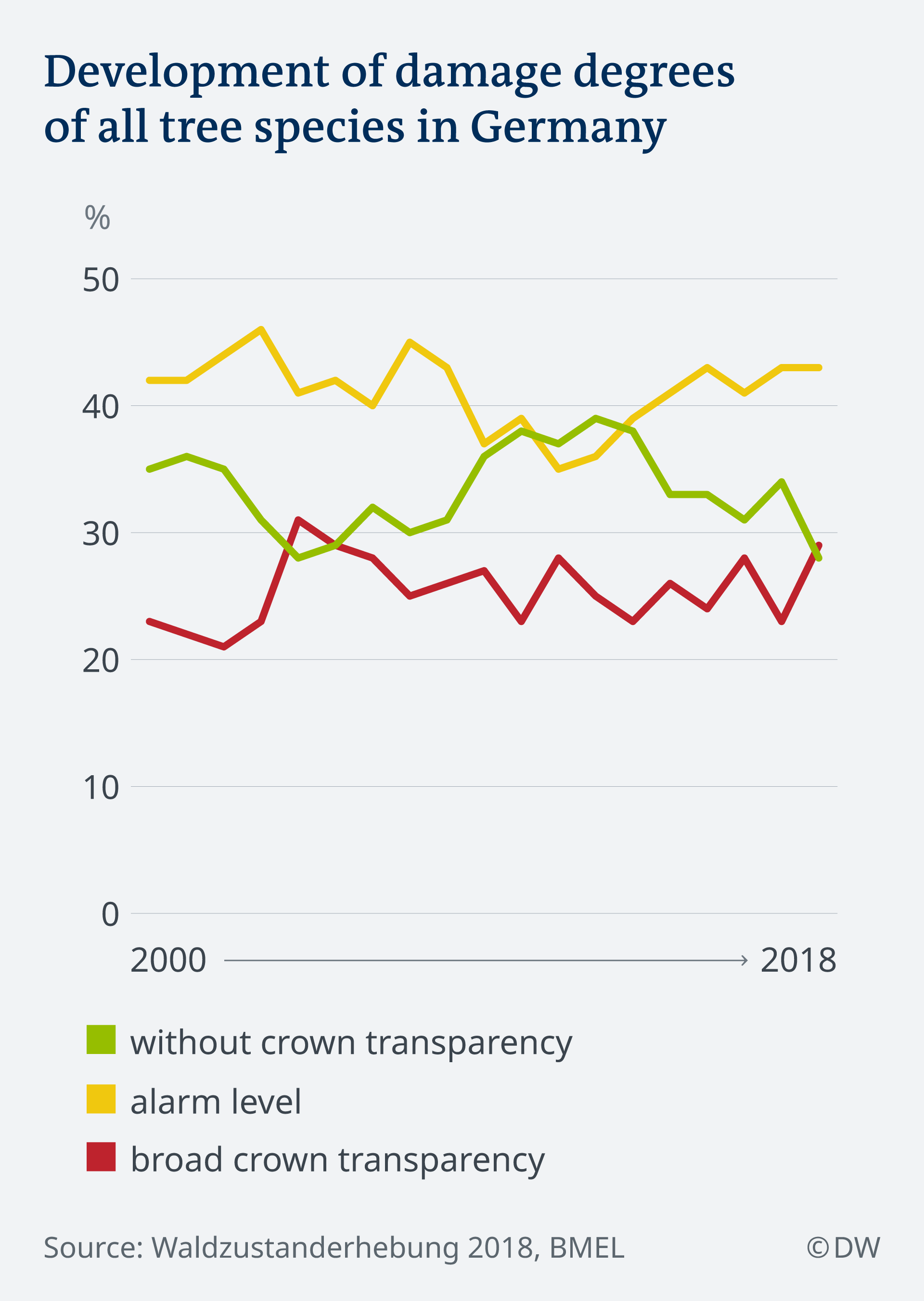 "This is emotional for me," Braun says after a brief pause. When he took charge of the Sinzig forest more than three decades ago, many of the now-beetle-infested trees had just started growing. He says it pains him to see "all the work I have put in go to waste." Braun admits that, as a civil servant, he gets paid even if the forest is not as profitable as it could be. Nevertheless, seeing the destruction "still hurts," he says.

New forests for the world

But Braun doesn't want to get too melancholic, so he tries to focus on the positive side. When "planting new forests, we will try to make the woods more resilient," he says. Specifically, this means planting different types of trees to create mixed woodland. By increasing variety, the forests not only become more resilient to climate change, they actually help combat it. Agriculture Minister Klöckner has pledged some half-a-billion euros for reforestation efforts in Germany, calling woods the green lungs we need to tackle climate change.

A university study from ETH Zurich, meanwhile, found that if we act now to plant more trees and restock forests, we could reduce the amount of carbon dioxide in the atmosphere by up to 25%. The paper found that across the world, there are 900 million hectares that could be potentially reforested — over half of which are located in just six countries.

This finding sounded sensational at first, but the authors were soon criticized for having based their argument on an overly optimistic calculation. After all, if forests take more carbon dioxide out of the atmosphere, other natural carbon dioxide reservoirs such as oceans will release more of the gas. 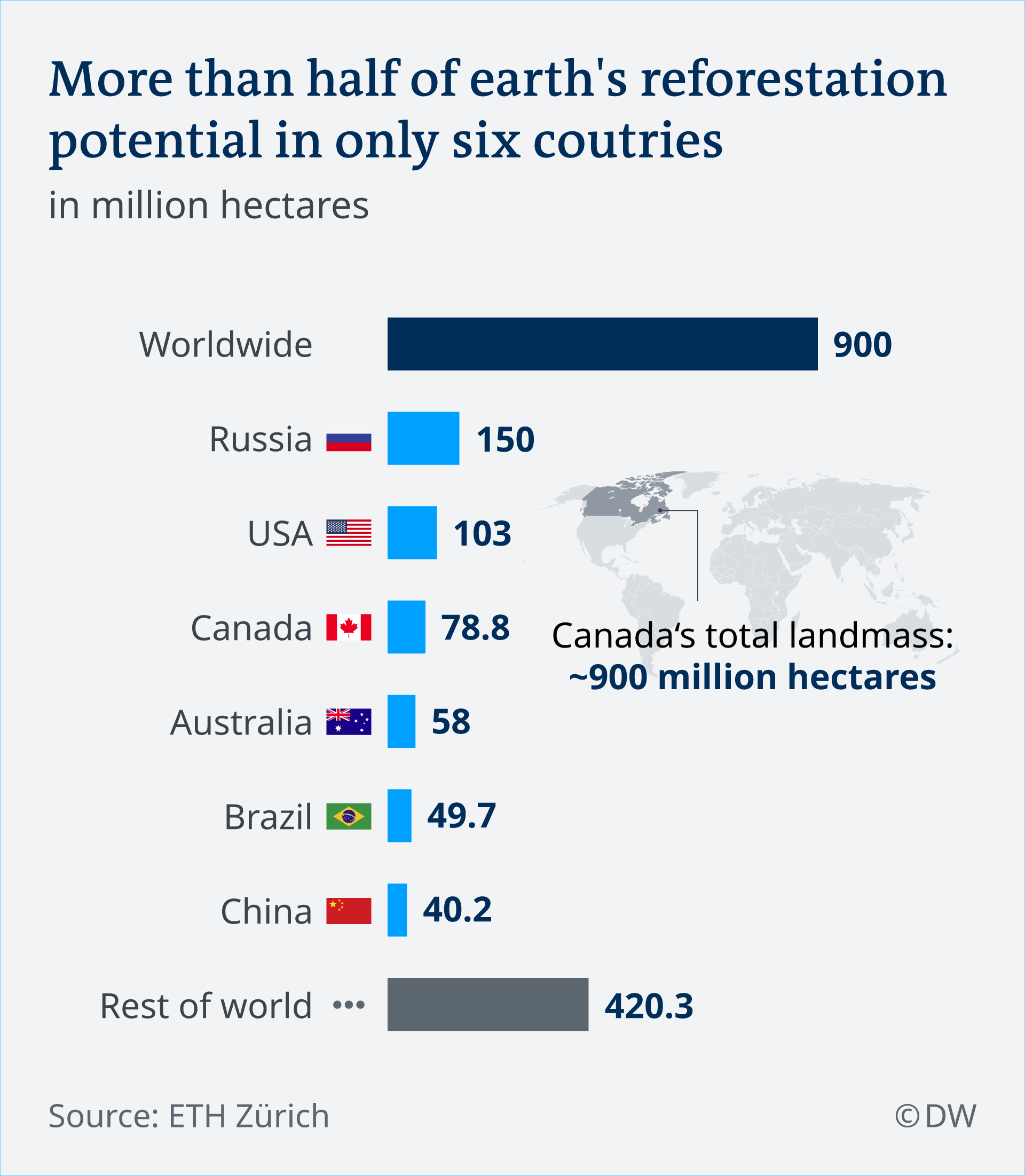 But even if the researchers in Zurich are being optimistic, reforestation remains a good idea. Braun certainly believes so, too. But, he wonders "where these new forests are supposed to grow." He says that human settlements and agriculture already use up considerable space, leaving little room for woods. He says this also applies to the region around the town of Sinzig. Thus, replenishing damaged woodlands has to be the top priority, he argues.

Read more: Restoring forests in Mali: Tree stumps could be the solution to disappearing woodlands

Back in Braun's Sinzig office, folders and documents are piled up on his desk. With so much to do, one could think he might lose sight of the looming forest problem. But that is not the case. "I would agree that we are facing a forest emergency, because we lack the capacity to take action," he says. Indeed, the German Forestry Association has issued just such a warning. That is why, Braun believes, lawmakers should fund reforestation efforts in the medium-term. We may have to get used to the dry climate because it's something lawmakers can't directly influence, he says, but they can certainly help replant forests.

"At this moment, we are fighting this issue on all fronts," Braun says, but we are not yet seeing progress. There is a map in his office showing Sinzig's forest with orange and red markings. The orange color denotes beetle-infestations Braun identified in the past six months. The red shows infestations spotted in just the last two days. The map is like a warning: Germany's forests are in danger.