Several European countries have been hit by forest fires over the past two years, in which more than 300 people have died. The EU is building up a fleet of fire-fighting aircraft which it hopes will prevent more fires. 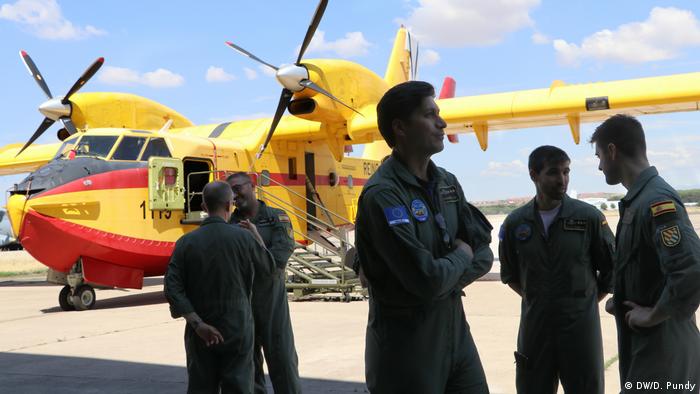 Seven fire-fighting planes and six helicopters – they are the first aircraft in the new "rescEU" fleet — allocated by the five EU member states Spain, Italy, France, Sweden, Croatia. They are also available to other European countries and adjoining states, which can request to use the planes in an emergency to fight forest fires. Spain has assigned two Canadairs, some of the biggest and most effective fire-fighting aircraft. They have a capacity of more than 6,000 liters, and can refill their tanks in just 10 seconds.

The Canadairs are stationed at the military airbase of Torrejon near Madrid, awaiting their next deployment. On either side of the runway the grass is scorched and yellow. The weather forecast is for temperatures of up to 40 degrees Celsius in the shade – ideal conditions for forest fires.

The Spanish air force has had a lot of experience dealing with them. Last year, its pilots flew more than 200 missions with the Canadairs. Spain has a total of 260 fire-fighting aircraft, both large and small. Now, other, less well-equipped countries will be able to benefit from this expertise more quickly and efficiently.

"In recent times we've seen how wildfires have been spreading all over Europe, from north to south, from east to west. Fires don't respect borders," EU Commissioner for Humanitarian Aid and Crisis Management, Christos Stylianides, said at the official launch of "rescEU" at the Torrejon air force base. Climate change, he said, means forest fires are destroying more land, and the wildfire season now lasts longer than before. It used to be from June to September; now, May and October are also considered high-risk months – especially since October 2017. 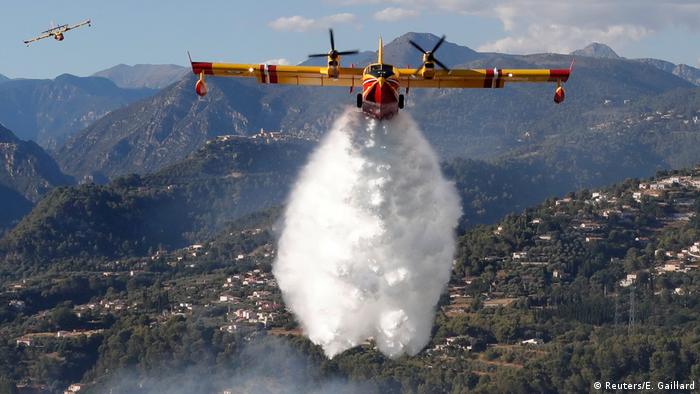 A Canadair drops water on a wildfire near Nice, France

Sixty-six people had already died in forest fires in central Portugal in June 2017 when extensive fires broke out again in the north of the country that October. The Portuguese government asked other EU member states for help – but it was unusually hot for the time of year in neighboring countries, too. The risk of wildfires was so high that no countries were prepared to risk lending out their fire-fighting planes. Consequently, over the next few days, 45 more people died in the flames in Portugal.

The aim of rescEU is to prevent that happening again, said Stylianides. Over the coming years the fleet will be extended and the equipment distributed across Europe in the most effective possible way. "We are fulfilling our responsibility to be better equipped and prepared to tackle the intensity and complexity of the natural disasters resulting today from climate change," he said.

Since 2001, the EU has had the Community Civil Protection Mechanism, through which any country in the world is able to request assistance from European countries in tackling natural disasters. Until now, member states could voluntarily respond to such a request for help and provide technology and personnel. This meant that some requests went unanswered. In 2017 there were 17 urgent appeals, six of which received no response.

Under rescEU, the revised emergency mechanism, EU countries and other states in need will have access to planes, helicopters and other equipment that have been permanently allocated for this purpose. It should prevent another disaster like the one in Portugal.

To ensure that countries participating in rescEU don't suffer shortages as a result, the EU Commission is financing additional equipment. It will contribute up to 90% of the acquisition and maintenance costs for new helicopters and planes. The EU will also cover 75% of transport and deployment costs.

In the coming year, the Commission wants member states to present detailed purchase plans. The funds will come out of the EU budget; 136 million euros per year have been allocated for this until 2020. After that, the EU Commission wants the sum to be increased, to 200 million per year. One Canadair plane costs between 30 and 40 million euros.

All equipment part-financed by the EU Commission becomes part of the rescEU fleet and must be made available to other countries in the event of an emergency. The fleet should be complete by 2025. As well as fire-fighting planes, it will also include equipment for medical emergencies and chemical or nuclear disasters.

The EU Commission is relying on the goodwill of member states to develop rescEU. It isn't able to acquire its own equipment, as civil protection is the responsibility of national governments. The Commission's offer to fund the project is therefore intended as an incentive.

Joint firefighting is solidarity in action

"I'm absolutely convinced that, with rescEU, we can extend Europe's capacities so that we have a truly efficient, effective, and joint response to natural disasters, especially forest fires," said EU Commissioner Stylianides. In future there may be three or four operations centers in different parts of the continent.

And the Commissioner doesn't think the lack of solidarity often encountered in other areas will be a problem when it comes to setting up joint disaster prevention services. "The first time we tried to convince member states of the necessity of upgrading the old system, there was a certain reluctance," Stylianides said. "But the forest fires in Sweden last August were a turning point. Wildfires aren't just a problem in the southern countries anymore, but everywhere."

It remains to be seen whether rescEU really will be a success over the coming years. The member states and EU parliament must decide on the financing of the initiative beyond 2020, and top EU officials don't seem optimistic that the project really will receive the projected 200 million euros a year.

Living Planet: Goats to the rescue!