Portugal breathes sigh of relief as fires brought 'under control'

Officials in Portugal have said the wildfires that had been raging in the middle of the country since the weekend are now under control. Sixty-four people have died and more than 200 have been left injured by the blaze. 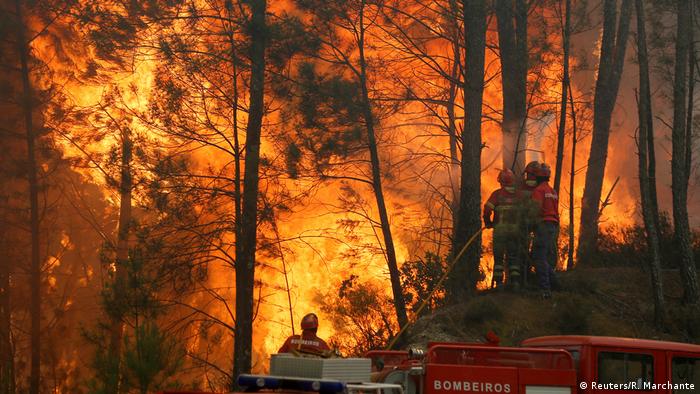 Portugal's civil protection agency said on Thursday that it had brought under control two giant blazes that killed dozens of people and burnt out large parts of the middle of the country.

Carlos Tavares, the civil protection official leading the operations, confirmed that the wildfire spreading through Gois, located about 150 kilometers (95 miles) north of Lisbon, had been contained. A day earlier, on Wednesday, he announced that the fire at Pedrogao Grande, located about 20 kilometers away, was under control.

Some 2,400 firefighters and over 20 water-dropping aircraft had been fighting the fierce fires since Saturday. Shifting winds and temperatures exceeding 40 C (104 F) saw the deadly blazes rage on for days. The two fires blackened about 40,000 hectares (99,000 acres) of woodland.

After days of sweltering temperatures, both areas are expected to be cooler over the coming days, with temperatures dropping to just under 30C.

However, Tavares urged caution, warning that some fires could resume. Hundreds of fire fighters remained on standby.

On Wednesday, the president of Portugal's League of Fire Fighters, Jaime Marta Soares, said he believed the fire was started intentionally, contradicting earlier reports from officials.

Police chief Almeida Rodrigues had initially ruled out arson as the cause of the wildfire, first saying that it was likely caused by a tree hit by lightning, and then by dry thunderstorms.

However, Marta Soares told local media that the fire had already been burning for two hours before the storm started on Saturday. "I believe, until there is evidence to the contrary... that the fire was of criminal origin," he said.

Press reports also suggested that Portugal's fire plans had not been revised for years, despite the country having an annual wildfire season. Meanwhile, locals questioned why first responders had not been more quick to seal off the stretch of road where most of the victims eventually died.

Deadly wildfires rage out of control in Portugal