The prestigious Peace Prize of the German Book Trade has been awarded to 75-year-old Brazilian photographer Sebastiao Salgado for raising awareness of environmental destruction. But Salgado has also received criticism.

The social documentary photographer and photojournalist Sebastiao Salgado received the Peace Prize of the German Book Trade on Sunday during an award ceremony at the Frankfurt Book Fair in the Paulskirche in Frankfurt.

Salgado's images have lent urgency to the global debate on nature and climate protection, the jury said when they announced Salgado as the winner of the prize in June. In an emotional acceptance speech, Salgado stressed that mankind needed to find solutions to pollution, highlighting in particular the displacement of indigenous people in the Amazon rain forest following wildfires earlier this year.

In addition to his photographs documenting the victims of climate change, Salgado was honored for his conservation work, with his Instituto Terra created in the late 1990s to directly revive biodiversity and ecosystems, beginning with vast reforestation efforts in his native Brazil.

German film director Wim Wenders, who in 2014 produced the documentary film "The Salt of the Earth" — a tribute to the star photographer — emphasized in his laudatory speech during the award ceremony that Salgado's works were "never just about observing" his subjects, but always "about sharing and communicating." Wenders also described Salgado as a "hero of peace."

Salgado also said that he wanted to share the honor of receiving this prize with his wife and with all the people he had photographed in the past decades. 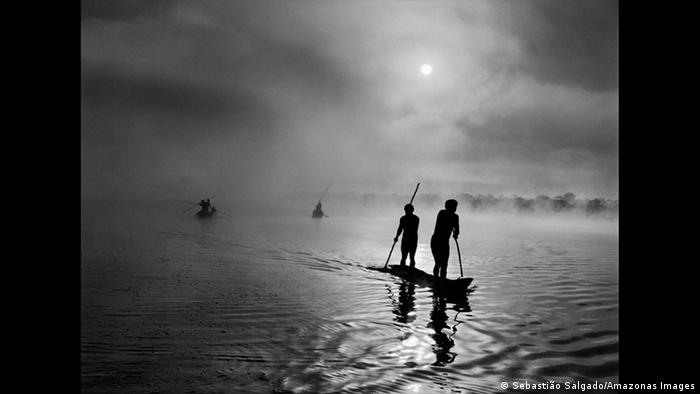 "Waura people fishing in the Piulaga Lake": Salgado also captures humanity in harmony with nature in his native Brazil

The prize, which is worth €25,000 ($28,000), is awarded for contributions to literature, science or art in support of peace. This is the first time that a photographer has received it since it was established in 1950 by the German Publishers and Booksellers Association (Börsenverein des Deutschen Buchhandels), the official representative of publishing houses and bookshops in Germany.

The jury described Salgado as an artist "who works for social justice and peace through his photographs and who lends urgency to the global debate on nature and protecting the climate."

His monochrome photography shows people displaced by war or climate crisis disasters, as well as those rooted in their natural environment, making "the defiled earth equally as visible ... as its fragile beauty."

Fellow photographers have accused Salgado of staging themes such as environmental destruction and exploitation in beautiful images. Elisabeth Neudörfl, a professor of documentary photography in Essen, told Deutschlandfunk radio that Salgado's view of the world was "backward-looking."

He has photographed penguins in the same aesthetic as mine workers and the Institute for Advanced Study in the Humanities in Essen even held a panel discussion on the controversy over Salgado's photos.

"I have discovered that there are not only people on this planet," the photographer said recently in an interview with the German press agency DPA. "Previously, I had only photographed people. But then I discovered the ants, the birds, the monkeys, the crocodiles. They are all so important to the planet. All are important, not just my species. Whatever happens to us: The planet will be there. Since I know that, I can live in peace."

When asked asked what photography could do, he answered: "Nothing alone. I can take a picture that people like, maybe a picture that moves them. But that doesn't do anything. It has to become part of a movement, together with text, the will of governments, the commitment of organisations. Perhaos I can initiate something."

'Salt of the earth'

Salgado grew up on a cattle ranch in Minas Gerais, which he has turned into a conservation area and reforested over the last 20 years. He was forced to emigrate on account of his opposition to the military dictatorship in Brazil, moving to Paris in 1969, where he has lived with his wife Lélia Deluiz Wanick Salgado, and where he began photography in 1973.

His extensive photo essays published as books include Workers: an archaeology of the industrial age (1993), and Migrations: humanity in transition (2000), among many others.

The German book trade Peace Prize was jointly won in 2018 by Aleida Assmann, a 71-year-old literary scholar and her 80-year-old husband, Jan, an Egyptologist.

Margaret Atwood is one of the most influential authors of our time. The German Booksellers' Peace Prize, awarded at the Frankfurt Book Fair, recognizes the Canadian writer's strong voice against repression. (16.10.2017)

More than 1,000 people have been arrested since protests against climate change started in the British capital on April 15. Greta Thunberg said the movement would "make sure" that politicians take drastic action. (22.04.2019)

Depth of field: The photography of Sebastiao Salgado

Brazil's celebrated photojournalist and documentary photographer has spent a lifetime capturing the delicate balance between people and nature — and the consequences when this balance is lost. (18.06.2019)

Other winners of the prestigious Praemium Imperiale in 2021 include light artist James Turrell and cellist Yo-Yo Ma.