Storms, droughts, floods — climate change has been driving thousands of students to the streets every Friday. But how are artists addressing the subject? Photographer Barbara Dombrowski has forged her own path. 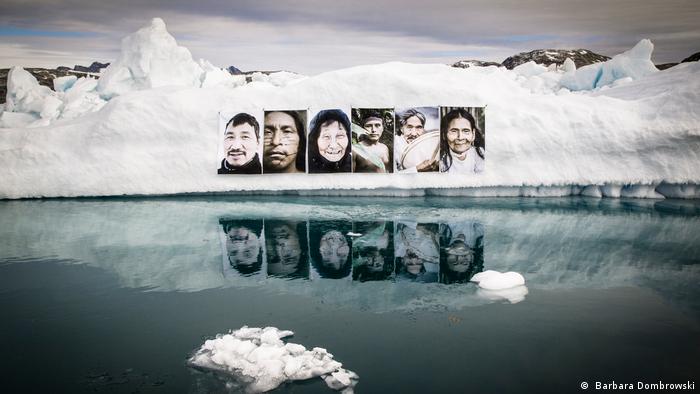 A lonely glacier in East Greenland. In front of it, one sees the faces of indigenous people in the rain forest. The ice water reflects their faces. The strange scene, captured in a photo, seems both artificial and oppressive at the same time.

The picture is part of the exhibition "Tropic Ice" by Hamburg photographer Barbara Dombrowski. The artist photographs people in one place and then takes the printed photos to another, where she then photographs their images. "Tropic Ice" thus shows people in two climate zones that could hardly be more different from one another: Greenland in eternal ice and the Amazon rain forest.

Dombrowski wants to give a voice to those most directly affected by the climate crisis. The photographer is nevertheless aware that her work can only have a limited impact on people: "Catastrophe pictures might scare us, but they don't really affect us." She rather aims to "encourage dialogue" through her art by creating works that initially create confusion, but also tell the story of climatic change and connect people from the north and the south. 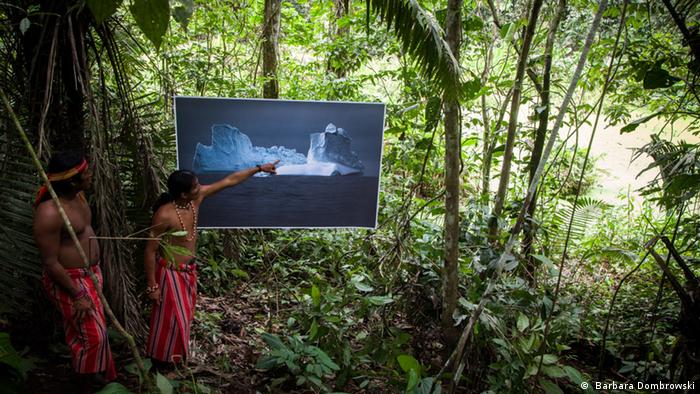 A photo of a glacier in the Amazon rainforest

During her project, Greenlanders told Dombrowski about the fish changing their migration routes, the seals settling further north and the winters becoming unusually warm.

The indigenous in the Amazon also reported about changes in precipitation — hail, for instance: "They didn't know it at all," points out the artist, "which means it didn't happen previously."

Their observations have allowed Dombrovski to feel the impact of the climate emergency directly, explains the 54-year-old photographer. Her task became clear: to photograph people in these remote areas and to show that climate change has long been a reality for them. "We need to make climate change more visible," says Dombrowski. "Art can be more than just something beautiful-looking."

What can art achieve that science can't? When it comes to protecting the environment, the photographer feels that she's "always lagging way behind science." But artists play a complementary role, she adds, as they are free to portray a negative development "and let the viewers draw their own conclusions." 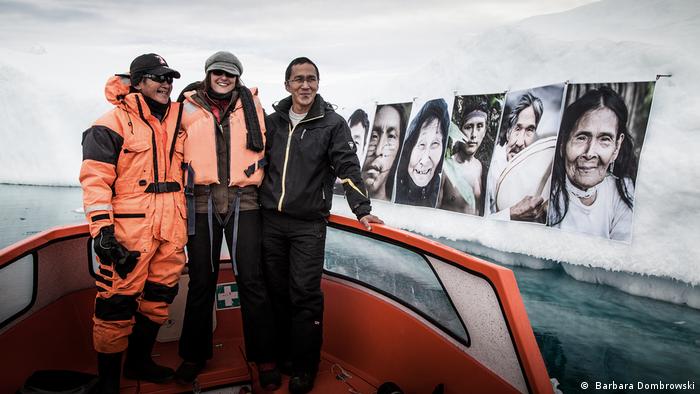 Baarbara Dombrowski in front of her work "Tropic Ice"

A new perspective on the facts

Art by climate activists finds another platform on social media, for instance under the hashtag #Art4Climate initiated by the United Nations. These artists' contributions provide different impressions to support the numbers and facts about the climate emergency.

The idea of combining art and environmental topics to move people is not new. The 18th-century explorer and scientistAlexander von Humboldt also drew and painted during his expeditions, creating illustrations of species that were until then unknown in Europe.

The German Environment Agency has been organizing for over 20 years a series of "Art and Environment" events, highlighting artists who deal with the topic. The art commissioner of the project, Fontini Mavromati, feels it's a good way for climate experts to view the problems from another perspective. Art might not be the best approach for educational purposes, he says, but it does allow people to see the facts in a new light.

As the climate emergency keeps progressing, Barbara Dombrowski sees every day more reasons to keep pushing her project. The photographer wants to expand her exhibition to all five continents. "Climate change affects us all," she says, "because there's no end in sight."

Ice peaks rise out of the water, snow-white, never-ending landscapes wherever you look. Experience Greenland in 360 degrees — without freezing.  (19.02.2019)

'We can make a difference': Voices of school climate strikers from around the world

Thousands of kids have walked out of class for a global day of climate action. DW spoke to young people from around the world taking part in the Fridays for Future marches about their hopes and fears. (15.03.2019)

Zambian cartoonist Mwelwa Musonko is taking on climate change by using satire to raise environmental awareness. His creations include a comic book superhero whose mission is to kick global warming's ass. (13.09.2018)