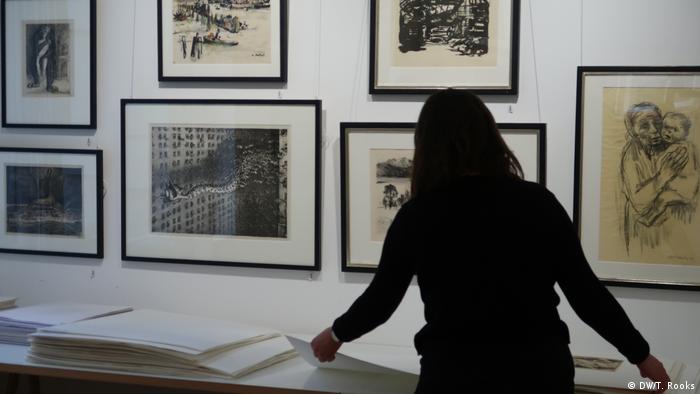 Going once, going twice! Sold! Excitement fills the air, it was all so fast, a blur really. The rush of bidding at auction in a room full of buyers is exciting. But in the times of the coronavirus when salesrooms are closed or restricted for the public, this is a feeling more often felt alone in front of a computer or mobile device.

This year, Sotheby's and Christie's have postponed most auctions and moved some to other locations. Offices are opening in Asia and Europe, but are still closed in the US. For years the two giants have been accused of being resistant to change. Now change is being forced upon them.

Since COVID-19 started sweeping the world both big auction houses have pushed their "private sales" business, which are direct sales they broker. They have also scrambled to create more online-only sales. Between April and July Christie's more than doubled the number of online sales compared with the same period last year.

Sotheby's has also ramped up online-only sales. Since March they have had 37 and brought in nearly $70 million (€63 million) according to company boss Charles F. Stewart. In Hong Kong, the first place to be hit by the coronavirus shutdowns, they moved their July sales to the convention center as a way to give everyone enough space.

Small and sticking to tradition

Other regional and smaller auction houses have forged ahead more traditionally because they don't have the luxury or space to put things on hold or cancel auctions. Bassenge is one of these. It is a small Berlin auction house that specializes in prints, drawings and paintings from the 15-19th centuries plus modern art, rare books and photography. 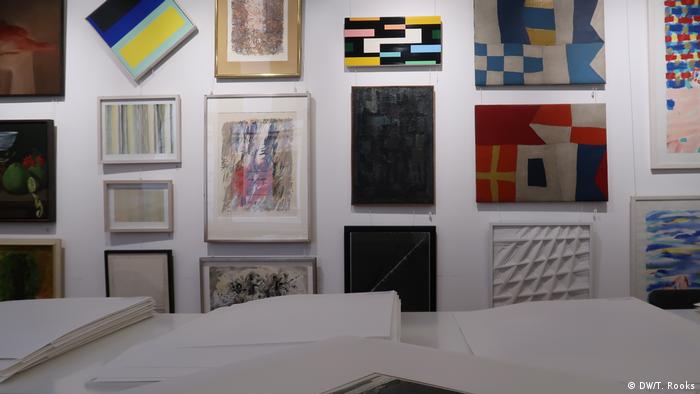 Art on display at Bassenge. Anyone wanting to look at the artworks must call ahead and wear a mask when they get there

Since the outbreak of COVID-19 in Germany in mid-March, the company has stuck to its spring and fall schedule. In early April, it held its three-day book sale as planned and had some record sales. At the beginning of June, art and photography will be sold like in years past. Still despite appearances everything is different.

Adapting to a social distancing world

The showrooms can still be visited, but a note on their website and printed in the catalogs asks everyone to make an appointment beforehand. In the past anyone could stop by whenever they wanted during opening hours to inspect the objects for sale.

Cloth gloves to handle art have long been a common sight at auctions; now distancing rules are important. There are hand sanitizer stations at the entrances and plexiglass screens around employee desks. When clients come in masks are also required. To accompany the new rules, they have extended the preview from one week to two weeks.

Online there is a virtual tour of their salesrooms, though this only shows things hanging on the walls. Everything in drawers, portfolios or in storerooms is not available virtually. Still many of Bassenge's customers like to inspect items for sale in person. But the days of handshakes and air kisses are a thing of the past. 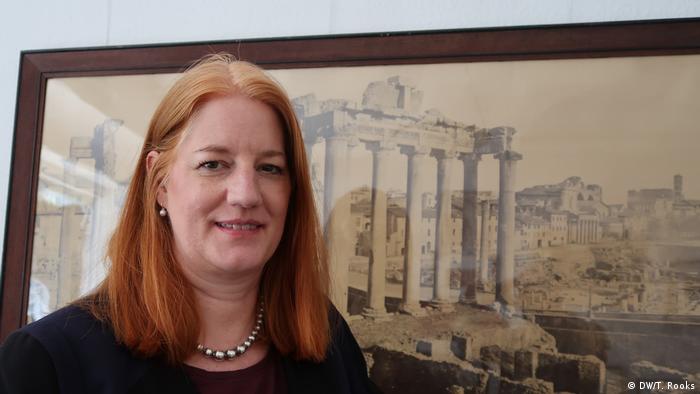 Jennifer Augustyniak, head of the photography department, has been with Bassenge since May 2000

"Many of our customers have known us for years and come in twice a year to have a look at what is on offer. Up until now the majority are still coming," Jennifer Augustyniak, head of the photography department, told DW. "The ones who can't come in — collectors from France or the UK — have asked for more images or detailed condition reports than in the past."

This additional information can't show the size of something, its true colors or impact. But over the years Augustyniak and her colleagues have built up a Rolodex of regular customers around the world who have stayed true to the business. Clients trust their judgments and often take their advice, even if it is on the phone or with an email. This confidence may be one of the company's most valuable assets during the coronavirus.

The future of small auctions

In Germany, like many other countries, auctions are governed by strict rules. Auctions are a public record and not just anyone can stand at the podium and take bids, they must be licensed. And for it to be a "public auction" there need to be people in the audience. Currently Bassenge is limited to nine live bidders; even the staff handling the phones will not be in the room. 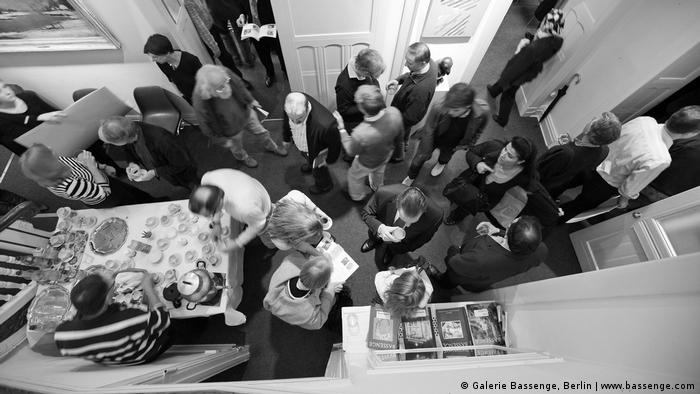 Normally there was always a lot of action before and during auctions. In a blast from the past, here the hallway is full during a short coffee break. Now only nine bidders are allowing in the salesroom at one time. It is a completely different feeling

Traditional auction houses make money in two main ways: They take a commission from the seller and charge the buyer a fee on top of the hammer price. Unsold items don't bring in any money. It is no wonder that many companies are seeking new shockproof business models.

In many ways smaller auction houses are more adaptable to changing times than their bigger competitors. Being smaller, they are nimbler and easier to point in a new direction. They just need to invest in new technologies and build up their online presence. A focus on more direct and personalized contact with clients and perspective buyers and sellers may also help. 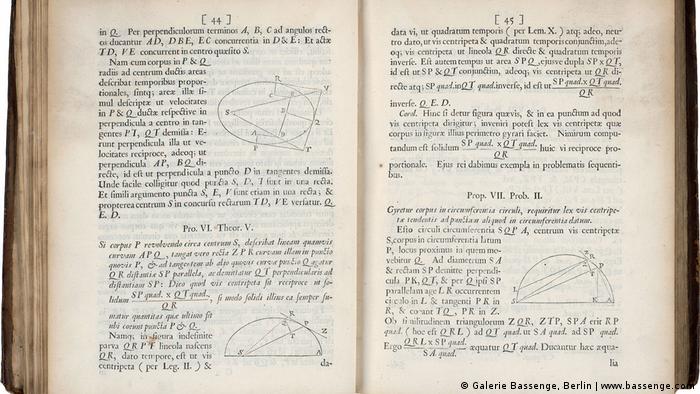 In April, 'Philosophiae naturalis principia mathematica,' a book by Isaac Newton from 1686, sold for €140,000 despite travel restrictions and other coronavirus measures. It was a record for the auction house and €20,000 above the estimate

Bassenge was started by Gerda Bassenge in West Berlin at a time when men dominated the German cultural scene. She worked at the famous Galerie Rosen for years. After Rosen died and his gallery closed, she set up Galerie Gerda Bassenge in January 1963. Her first auction was in June.

Five years later they moved to their current headquarters, a large villa in the lush residential district of Grunewald. Today, David Bassenge is the third generation of the family to run the business. He has 20 employees in two Berlin locations.

Even in the digital age, Bassenge still prints auction catalogs, which Augustyniak thinks is important. "They are an important reference and besides looking through a catalog is different than scrolling online," she said. At the same time she sees a big increase in the amount of time people are spending online looking and researching in detail — and most importantly buying — compared to five or 10 years ago. So far this year there has been more interest than usual with a lot of people signing up for online bidding. 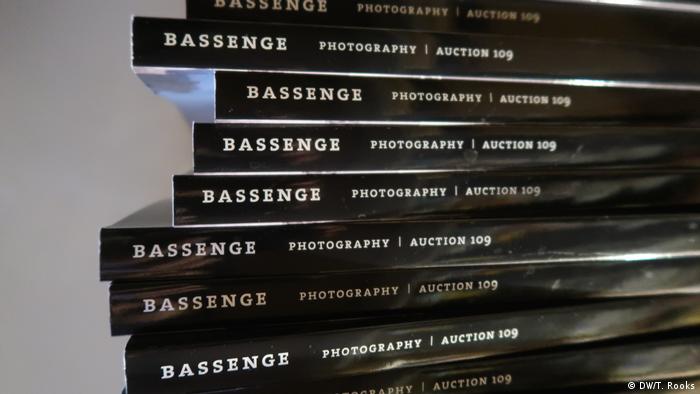 Even while much of the world is going online, many collectors still want printed catalogs. Some are so popular the auction house runs out of copies

That's why she is sure that a buyer will be found for two highlights: a portfolio of 10 photographs of Berlin's Tiergarten by Herman Vogel from 1866 with an estimate of €15,000; and 36 prints by Japanese photographer Shotaro Shimomura titled "The World through Lenses" from 1934-1935 with an estimate of €9,000.

In ordinary times, planning ahead stabilizes the ups and downs of the auction business. This time it helped because before lockdowns Augustyniak already had about three-quarters of the things for the current sale. She does worry though that if travel restrictions stay in place it may soon be harder to visit clients and get artwork to sell. That will be a big test of business under the coronavirus.

Yet there is a huge gulf between small auction houses like Bassenge and Christie's and Sotheby's. Selling things for a few thousand euros or even a book for €140,000 is not the same as buying multimillion-dollar artworks by Monet, Picasso or Francis Bacon sight unseen. So far the small fish have the online advantage, but as buyers and sellers become more accustomed to online sales, the sky is the limit.

The German Foreign Minister Heiko Maas has confirmed that Germany will remove a travel ban on EU member states and some other countries from June 15. However, he stressed that this was not "an invitation to travel." (03.06.2020)

Spanish authorities had deemed the painting a national treasure and insisted it stay in Spain. The 83-year-old art collector, who owned the painting, was convicted of smuggling and sentenced to 18 months in prison. (16.01.2020)

The investigation concludes with few definite answers: Only 14 out of the 1,500 artworks found in Cornelius Gurlitt's possession have been formally identified as Nazi-looted art. What else has been achieved? (28.05.2020)