Until recently, the piece hung on a wall in the home of an unsuspecting elderly woman in northern France. The painting fetched about five times more than its initial estimate. 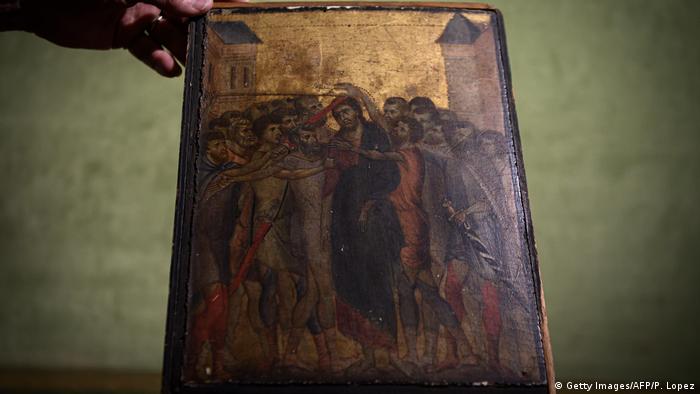 A masterpiece by the Italian painter Cimabue sold for €24 million ($26.6 million) at an art auction on Sunday in Paris.

The painting known as "Christ Mocked" was discovered in a French woman's kitchen in September and had been valued at between €4-6 million before it went under the hammer.

The auction house, Acteon, did not reveal the name of the successful bidder, but it said a foreign museum had been among those bidding for the long-lost painting.

The woman, who is in her 90s, had decided to sell her house in Compiegne in northern France and hired an auctioneer to look through her home's contents in case there were items of value.

After selling her home, Philomene Wolf said she had only a week to have the goods appraised by an expert. "I had to make room in my schedule … if I didn't, then everything was due to go to the dump," Wolf told the French daily Le Parisien.

The painting, which measures about 10 inches by 8 inches (24 by 20 centimeters), was in excellent condition although it had been covered in grime, having hung above a cooking hotplate.

The masterpiece attributed to Cimabue, who is regarded as the father of the Renaissance, is dated at around 1280. Experts at the Turquin gallery, which examined the painting, concluded with "certitude" that it bore the hallmarks of the Italian artist.

The painting discovered in a French attic in 2014 was sold to private buyers two days before a hotly awaited auction. The anonymity of the buyers is the latest secret surrounding the mysterious painting. (25.06.2019)

An iconic painting from Impressionist artist Claude Monet's "Haystacks" series has been sold for a record price at auction in New York. The former owners paid $2.53 million for the work in 1986. (15.05.2019)

A Bansky painting depicting the British Parliament full of primates has sold for a record $12 million at auction. The secretive artist criticized the sale as being against his principles. (04.10.2019)