The coronavirus is shaking up the world′s art market in unexpected ways | Business | Economy and finance news from a German perspective | DW | 06.03.2020

As COVID-19 hits the Hong Kong art market, its repercussions will be felt around the world and not just in Asia. The crisis may upend old business models and jolt the art market further into the virtual realm. 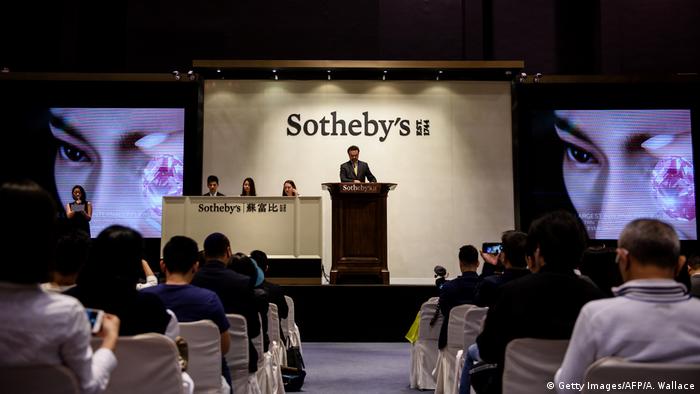 It was a big bang for Hong Kong and the wider art world. Though it started with a few unremarkable press releases, it was bad news for the former British colony.

First the Art Basel fair was canceled. Then the Hong Kong Arts Festival was stopped before it could get going. Auction houses Christie's and Bonham's made contingency plan and postponed their sales there. On February 24, Sotheby's sent out its own "revised schedule" for its spring auctions. Some sales were postponed; others were moved to New York.

Up until now Hong Kong has been the gateway to the growing Asian art market. Buyers and sellers have turned the place into a major art hub. Now in the top-tier alongside New York and London, Hong Kong is the epicenter for Chinese, contemporary and modern art, wine and Western art in Asia. In all, China, the US and the UK account for over 80% of total global art sales by value.

The recent monthslong demonstrations in Hong Kong and now the growing list of cancellations in the art world may seem like the death of Asian sales. But Kathryn Brown, a UK-based art historian and international expert on the art market, is more optimistic. "The art market is resilient. Art survives disaster and as an asset class it is very resilient partly because it is not dependent on production chains," she told DW.

Global art sales reached $64.1 billion (€56.7 billion) in 2019, according to the Art Basel and UBS bank Art Market 2020 report. This is an overall decline of 5% from the previous year. Sales in China were down even more.

But any bumps in Hong Kong are likely temporary and can be made up in other regions. "The art market is a huge global network and different parts of that network can operate to prop up other segments." This also goes for auction houses, too, she said.

Sotheby's was the first international auction house to hold sales in Hong Kong in 1973 and China in 2012. It was only in June last year that the company announced it would be acquired by Patrick Drahi for $3.7 billion after being a public company for 31 years. The move back to private ownership was meant to give them more freedom and be less chained to quarterly reports.

In 2019, Sotheby's recorded results of $4.8 billion from over 400 auctions. Sales in Asia were $939 million, which according to the company gave it a 16% lead in market share over its biggest competitor. Asian-based clients accounted for around 30% of their global sales. Still overall sales were down from the previous year's high of $5.3 billion. 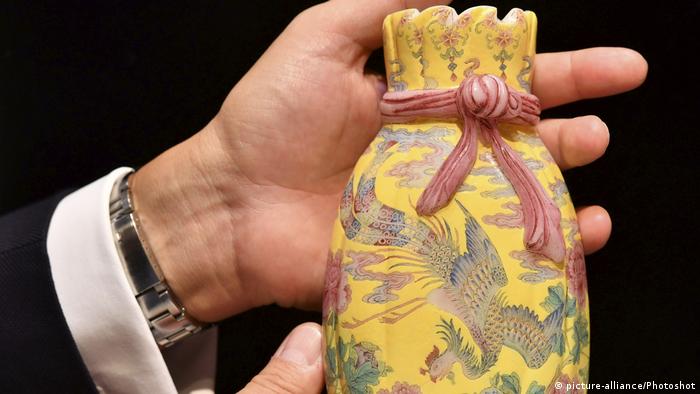 The highest-value lot at Sotheby's Asia in 2019 was a 300-year-old Beijing enameled glass vase in the shape of a pouch. It sold in Hong Kong in October for $26.4 million

Christie's, which has been privately owned since 1998 by a holding company run by French billionaire Francois-Henri Pinault, didn't fare much better. Total auctions and private sales last year brought in $5 billion — well down from $7 billion in 2018.

For decades these two auction houses have been the go-to place for high-end art. For both sellers and buyers there were hardly any other options.

Lately interest from China has been a massive driver in the art market. Many think Chinese buyers pulled the market out of a long slump. But last year the Chinese art market contracted by 9%, according to online database artprice.com. They also noted that of the world's top-10 auction houses, six operate only within China. The other four all hold auctions in the region to try and get a piece of the pie. Not surprisingly Christie's and Sotheby's global duopoly is on the wane. 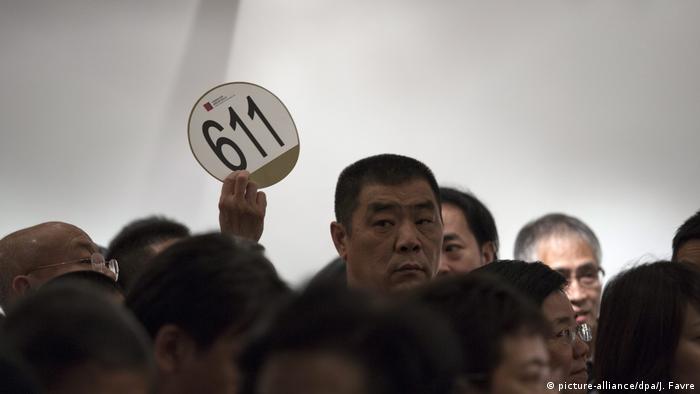 Little known outside of China, China Guardians Auctions is one of the biggest auction houses in the world. Back in 2012 the company held its first sale outside mainland China in a bid to challenge the supremacy of Christie's and Sotheby's

Brown, who is also a lecturer at Loughborough University, nonetheless sees other big changes coming directly out of the disruptions in Hong Kong. For years major auction houses have organized their sales around a spring and autumn schedule. Belatedly they have come to understand the importance of social media and have gone after online buyers and even held online-only auctions.

More recently they have also tried to draw bigger crowds by timing their sales to coincide with big art fairs and events. Now the tables are turning and it is the fairs and dealers who are stealing the show and being taken more seriously. Galleries are going global and turning their names into recognizable and trusted brands.

The inhibitions around online art buying are also being overcome. "Increasingly art is being sold online. It's being sold by dealers via jpegs. People are actually looking at jpegs and investing on the basis of what they see in digital form," according to Brown who pointed out that because the show was canceled Art Basel announced the launch an "online viewing room" that will feature artworks and offer early access for VIPs.

Such "virtual spaces" along with the increased online presence of galleries are upending the business as usual models. Though in their infancy, such models are flexible, have lower operating costs and a much wider reach than brick-and-mortar auction houses or galleries. Businesses will be less reliant on people coming to them — they just need to learn how to harness the new technology properly. 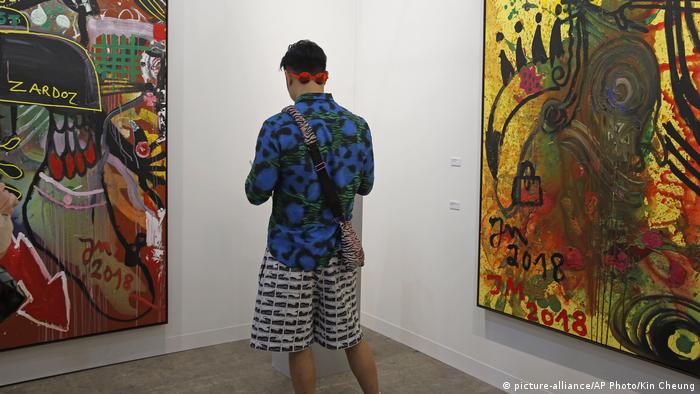 A visitor contemplating paintings from German artist Jonathan Meese at Art Basel Hong Kong back in 2019. This year's fair was set to open in March but was cancelled at the beginning of February because of the outbreak of the coronavirus. Fairs and galleries are nonetheless on track to take a bigger part of the art market pie

To the highest (online) bidder

Unsurprisingly, the buyers are the early adopters. Many are younger and grew up with the internet and are not afraid of technology. It is the businesses that need to catch up.

It was only in March 2019 that Gagosian gallery sold a painting from 1988 by German artist Albert Oehlen for a record-breaking $6 million, well over his highest auction result. The work was sold in its own viewing gallery "within three hours of the artwork being revealed, and the purchaser never seeing it in person," according to a tweet by the gallery's manager, Sam Orlofsky.

This sent a clear signal that buyers are willing to spend a lot online for things that they have never seen in person. In spite of this call to action, things are changing slowly though.

But what about the trouble Hong Kong is facing? "Shifting sales geographically doesn't mean to say that they won't continue to sell successfully ... People who were going to bid will probably bid anyway," said Kathryn Brown. Even so she still thinks the classic auction house salesrooms have a real function. "They are still important for networking, meeting dealers, cultivate relationships and being seen," she concluded.

All markets hate uncertainty and now the COVID-19 outbreak spreading across the world may pull the traditional auction houses' business model further out of shape. Yet once the genie is out of the bottle and buyers have spent large sums online, there is no going back.

It is inevitable that more high-end art sales will be forced online and that the market will evolve. What is perhaps remarkable is that it may take a catastrophic pandemic to bring about real change and upend one of the world's most staid business models and let buyer shop online from anywhere in the world.

The US president has said he does not want to speak to his Chinese counterpart Xi Jinping and threatened to sever ties with Beijing, as the standoff between the two countries continues. (15.05.2020)

It's right to take precautions; the coronavirus is not to be trifled with. Even without a vaccine, there's no need to panic. But we do so anyway, says DW's Jens Thurau after covering the outbreak. (09.03.2020)