In 2018, fine wine proved to be one of the best investments there was. But how long can the exclusive Burgundy and Bordeaux bubble last when traditional markets tumble in tough times? When times get tough some people reach for the bottle. And times are always tough somewhere. But 2018 was an especially difficult year for investors. Tariffs, trade conflicts and political uncertainties all added to a general sense of financial insecurity.

The difference in yields for short- and long-term government bonds was precariously small and with little or no interest to be had in traditional bank accounts and the S&P 500 index ending the year 6 percent lower than it began, investors looked for more diversified niches to stash their cash.

As in the past few years, many found relief in a different type of asset class, a dark-hued fermented grape juice. But this isn't the stuff found at the corner store, these are highly-prized bottles often bought directly from a vineyard or on the secondary market through specialized dealers or at auction.

Enriching your life through wine

Perhaps unsurprisingly, 2018 was a bumper year for fine wine. Sotheby's, an auction house which also runs a wine retailer, had 28 auctions dedicated to it and only 5 percent of the bottles went unsold. In all 161,000 bottles changed hands and brought in over $100 million (€87 million), an auction milestone.

Jamie Richie, worldwide head of Sotheby's Wine, says that the "real strength of the market is in mature wines, that are ready to drink, from the greatest producers and the best vintages. Burgundy leads the price growth, followed by Bordeaux." He also points out that demand is spread across the globe and no longer as concentrated as it once was. 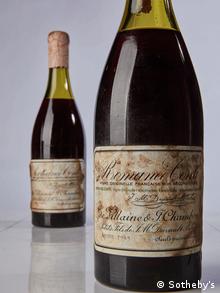 In October, two bottles of Romanee Conti DRC from 1945 shattered the previous auction record for a single bottle of wine of any size when one sold for $496,000 and the other sold for $558,000 at Sotheby's

Despite the reported returns of over 10 percent this year, being exempt from capital gains tax, or assurances that "anyone" can invest in fine wine, buying wine as a way to store value is not an area to enter lightly.

Bottles of wine are tangible assets that need to be picked and looked after properly. Disposing of them in a pinch may also not be easy or quick. And like stocks, not all wines are made equally; judging a bottle by its label is a science onto itself. A great wine from one year does not necessarily mean next year's batch will also be a hit.

"The usual ground rules apply to investing in wine as to other 'commodities' — buying the right wines, from the top producers and vintages, at the right time and at the right price. But there are added riders where wine is concerned, as it is a 'living,' agricultural product that can lose its value if kept in unfavorable (too warm, light or dry) conditions," says Richie.

There are also the problems of transportation and transaction costs — which eat at the bottom line — wines that have been altered or downright counterfeiting. And though bottles are usually quite robust, they are still made of glass and have a natural cork making them vulnerable.

Last but not least, tastes also change over time, as the move away from classic Bordeaux to Burgundy wines has shown — though this change probably has more to do with limited availability compared to global demand, than with a new direction in drinking.

Tim Triptree, international director of Christie's Wine Department, agrees that some wines or entire regions can "fall in and out of favor," though those produced in limited volumes like Burgundy are less prone to fall since they are "produced in very limited quantities and so high demand generally leads to upwards movement in prices." These top-shelf French wines are real trophies for collectors and connoisseurs.

For this very reason many investors looking for big returns have been concentrating on relatively young wines or even "en primeur" wine — wine that is still in the barrel. These lesser-known wines have more room to increase in value compared to the French duo Bordeaux and Burgundy since "buying old wines defeats the purpose as they have already achieved their greatest gains in price," says Richie.

Regardless of the difficulties surround investment in fine wines, trading and owning such rarities has the additional factor of being a social coup for elite investors, or those who have big aspirations. It is a relatively small, exclusive club of people who can come up with the $10,000 minimum amount required to start investing in wine that experts often quote.

One way to get a clearer overview of an opaque market is to watch auction results. But though wine has been auctioned for centuries, the auctions only happen periodically — mainly in New York, Hong Kong and London — and do not follow market activity minute for minute like a stock market index. Luckily for investors, more data is being processed and made available.

The best-known provider is Liv-ex, a London-based online exchange for fine wine. They not only connect buyers and sellers, but also follow the market closely and have accumulated tons of data. This pioneering work has brought large parts of the trade in fine wine out of the backroom and into the light.

Still, even in 2019 investing in fine wine will remain a rich man's game no matter what returns are available. As with art, it is often only the highest of the high-end market that is recession-proof. Buying mediocre fine wine is like buying a mediocre Picasso in poor condition. Maybe a buyer can be found, but in bad times you will be stuck with it on your walls.

If the world's economy ends up in a recession as many are predicting, it will be especially hard to find people to invest in the nice-to-have world of wine. One thing it has in common with other investment assets though is the fact that those who have the luxury to wait long enough will probably find a buyer. But if that doesn't work there is still another possibility: the once hopeful owner can still pop the cork and enjoy a drink, something they can't do with stocks or bonds.