Hundreds of people have taken to the streets of Budapest to protest ahead of a visit by Russian President Vladimir Putin. Prime Minister Viktor Orban has been critical of the EU for imposing sanctions on Russia. 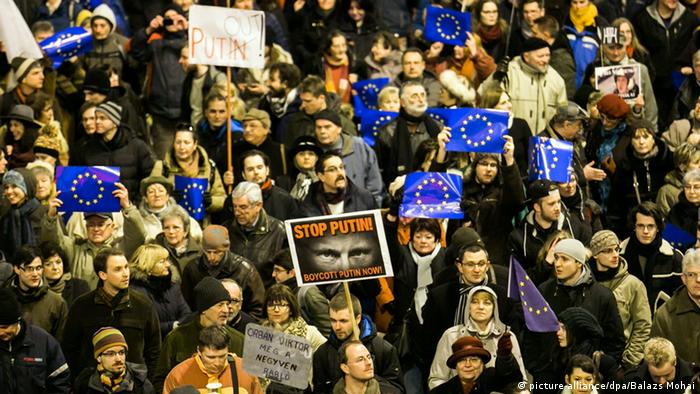 An estimated 2,000 people took part in the march between the Hungarian capital's two main train stations, in the east and west of the city. Organizers told the AFP news agency that the east-west route was chosen to symbolize the desire of the protesters to remain rooted to the European Union and the West, as opposed to swaying towards Russia.

Many of the demonstrators carried banners reading slogans such as "stop Putin," or "no to Putin, yes to Europe." They accuse Prime Minister Viktor Orban of cozying up to Putin despite his alleged role in the conflict in eastern Ukraine, where Western nations have accused Moscow of supporting pro-Russia separatists with equipment and manpower.

"We resent that Orban is making a fool out of Hungary by inviting Putin here to do secret deals while there is a war next door in Ukraine," Marton Gulyas, one of the organisers, told AFP.

The also accuse Orban of seeking to stifle political dissent in the country.

"The pestering of civic groups, corruption and the fattening of oligarchs show that we are getting ever closer to the Russian model and farther from the European one," another of the protest organizers, Gabor Vago told the Associated Press news agency.

Some of the elder protesters expressed fears of a return to the past.

"I lived most of my life under communist rule, I don't want this country to fall under Russian influence again," 67-year-old demonstrator Maria Toth told AFP.

The march came just hours before President Putin was to arrive in Hungary for a short visits in which Orban was expected to push for a long-term gas supply agreement with Russian energy giant Gazprom, as the current deal expires later this year. He was also expected to seek reassurances that Russia planned to make good on a 10-billion-euro ($11.3 billion) loan to upgrade a Hungarian nuclear reactor.

Observers believe that Putin, on the other hand, could press Orban to stall potential further European Union sanctions on Russia over its alleged role in the Ukraine crisis. Orban has gone along with the sanctions imposed on individuals and entities so far, but he has also criticized them, saying last year that the EU had "shot itself in the foot" by damaging business ties with Russia.