Thousands of Hungarians have been protesting against the policies of Prime Minister Viktor Orban. Among the demonstrators' complaints was an apparent move towards Moscow and away from democracy. 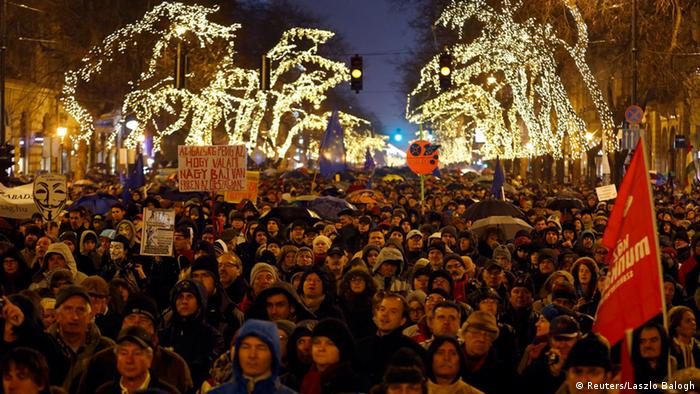 Thousands of Hungarians flocked to the center of Budapest, opposing a perceived government policy of centralization and rapprochement with the Kremlin.

Protesters said they were demonstrating against poverty and accused the government of undermining checks and balances put in place to prevent abuse of power. Washington and Brussels have both accused Orban's government of restricting media freedom and weakening the independence of the country's judiciary.

"I think it is important for people to demonstrate," organizer Zsolt Varady said in a speech at the rally. "The politicians have gone far away from reality. They don't seem to represent the public's views."

The protesters expressed anger not only at Orban, but all the political parties who have held power since the fall of communism a quarter of a century ago.

"We condemn the parties of the last 25 years... We cannot expect the state to think for us," Varady told the crowd.

Critics claim the present government's cooperation with Russia in the energy sector - including a loan from Moscow to upgrade a nuclear plant and Budapest's support for the Russian-backed South Stream gas pipeline project - shows that Orban is seeking closer ties with Putin.

Orban has also vowed to make Hungary a "non-liberal" state, and last month called for the mandatory drug testing of journalists and politicians.

Hungarian Prime Minister Viktor Orban believes the sanctions on Russia are more harmful to the West, saying the policy is like 'shooting oneself in the foot.' He urges the EU to rethink the measures. (15.08.2014)

Hungarian Prime Minister Viktor Orban has made no secret of his critical attitude toward the EU. But the conservative politician won't dare risk an open split between Brussels and Budapest. (23.04.2014)

With 99 percent of votes counted, Hungary’s ruling Fidesz party has held on to its two-thirds majority in parliament. The OSCE has pointed to laws passed by the incumbent premier as the reason behind the win. (07.04.2014)