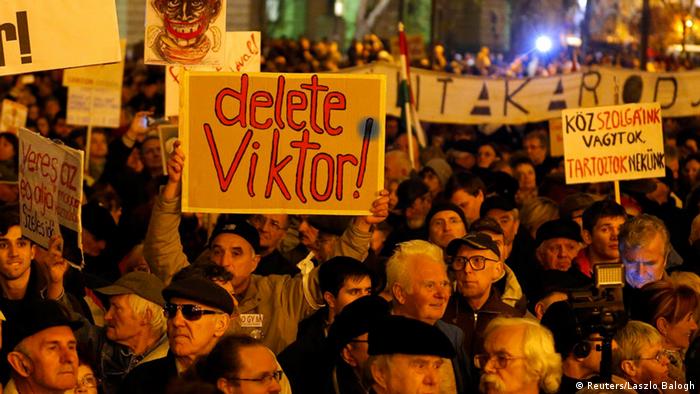 Hungarians on Monday staged their fourth protest within a month against Orban's policies and demanded greater accountability. Riot police clashed outside parliament with several hundred protestors who defied calls to leave.

Smaller protests also took place in 20 other cities and in European capitals like London, Berlin and Stockholm.

Last month, the US embassy in Budapest said at least six Hungarian officials and business associates would be denied entry to the US because of alleged corruption that harms US firms.

Tax chief Ildiko Vida said early this month that she was one of six people barred entry. She denied any wrongdoing and refused to resign. 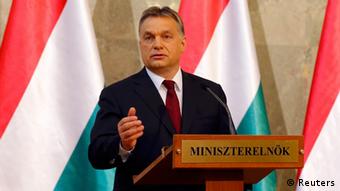 Orban was re-elected in April with a large margin

At Monday's protest, dubbed "Public Outrage Day," the crowd held up placards with messages to the government such as, "We can't pay as much taxes as you steal" and "We don't pay tax to criminals!" Protestors shouted "Orban get out!"

"Politicians are getting richer and richer and in this democracy they're the only ones winning," said student Anna Der, speaking with the Associated Press.

"We are an EU country, and we want to stay in Europe, where we belong," added student Balint Farkas, accusing Orban of seeking closer ties with Russia.

Last month, even larger protests forced Orban to shelve his plan to impose a tax on Internet use.

Orban and his right-wing Fidesz party were re-elected last April after wins at European and municipal elections. The opposition is fragmented and includes several left-wing parties and the far-right Jobbik.

Orban has raised concern in the US and EU with policies that his critics say have penalized big businesses, limited democratic freedoms and pulled Hungary closer into the Kremlin's orbit.