Refugees know gratitude and relief in a way others simply don't. But when reaching safety, joy is not always the overriding emotion. DW met one of Germany's newest Syrian families to learn more. 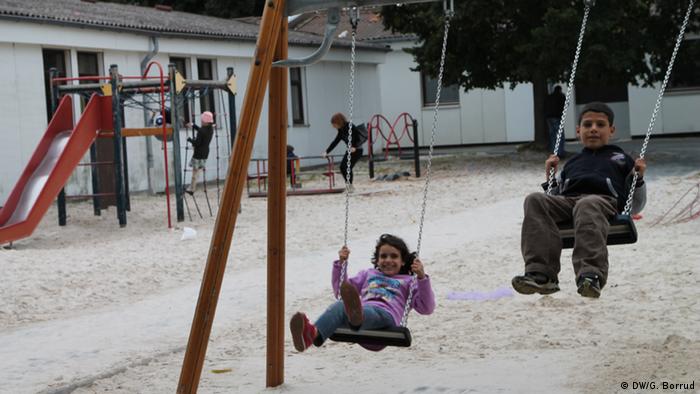 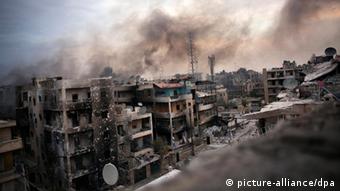 The ruination of the ancient city continues unabated

"My family and I were in Aleppo, the most dangerous place in the world. I couldn't sleep anymore, because I was scared for our children."

Whalide*, his wife and their two children have been in search of safety for over nine months. It was a voyage that initially took them from Aleppo to Lebanon, where hundreds of thousands of Syrians are currently seeking refuge from the civil war in Syria. The family is now in Germany, having passed through a transit camp Friedland, where 5,000 Syrians Germany has agreed to accept are to spend their first two weeks in the country.

It has been a long journey, and the 48-year-old is happy it is finally over.

"We've come from chaos and destruction, and now we are here to start a new life, to open a new page in our life story." 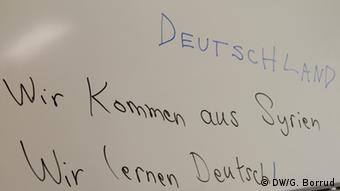 Language skills are the key to successful integration

I met Whalide at Friedland during one of the camp's German classes, where he was one of the fastest learners. He proudly - and clearly - enunciated to me:

Whalide and Syrian refugees like him at Friedland are given four hours of German instruction per day, with the hope that, by the time they leave, they will be able to introduce themselves and ask for directions. They are also given advice on how to secure work, one of the most crucial and demanding tasks they will face in Germany.

"Regardless of the qualifications one can present, there isn't much any of these people can do if they can't speak German," said Thomas Heek, who works at Friedland with the Caritas social relief organization. 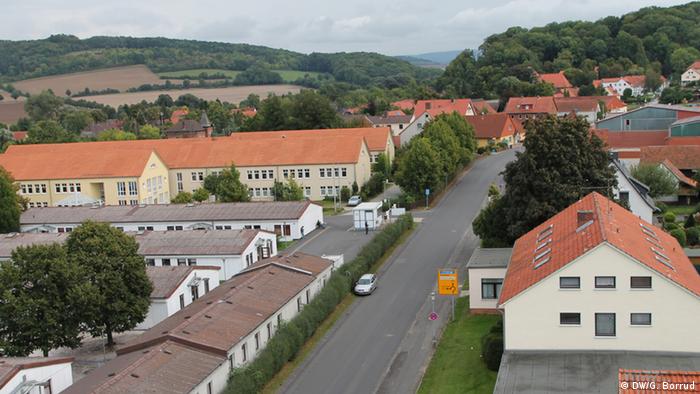 Camp facilities are spread throughout the village of Friedland

Friedland is still officially called a "border transit camp," a term that harkens back to its initial function of welcoming expat Germans and POWs back into the country, mainly from the Soviet Union.

"This camp no longer serves its original purpose," said Heek. "The people who arrive here now are, for the most part, not familiar with the German language. Back then, we were dealing with Germans, and the camp had the far easier task of repatriating them," Heek told DW.

Heek is well aware of the challenges people like Whalide, who is a qualified electrician, are up against.

"I've been working with asylum seekers for 22 years. To my knowledge, only very few have been able to get jobs in Germany that offer sufficient income to support their families," he said.

After the obligatory two weeks in Friedland, the Syrian refugees are sent to communities in Germany's 16 federal states, where they will have a two-year residence permit - with the option to extend if the humanitarian situation in Syria remains.

"Each family will be placed in a state based on federal quotas," Christiane Germann of the Federal Office for Migration and Refugees told DW. "From there, it's up to the state in question to decide where they will end up, in which community." 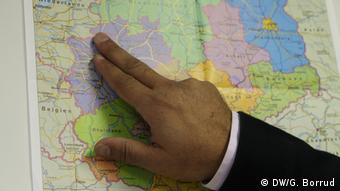 Whalide and his family have been assigned to Borken, a town in western Germany near the Dutch border, because his wife's sister lives there. This is the first criteria considered by each state when deciding where the families will be housed.

"First we look to see if they have relatives anywhere," said Christian Chmel-Menges of the district government office in charge of asylum in North Rhine-Westphalia, the state where Borken is located. "Then, we search out places that offer better chances of integration - for instance, whether a Syrian community already exists. If the refugees have special medical needs, we try to locate them near clinics where they can receive treatment."

Chmel-Menges said the refugees would be offered a six-month language course and that each family would be given social welfare if work can't be found - just like any other family in Germany. This was all part of efforts to help the Syrians integrate into their new communities.

"We've already seen pictures of these people on our TVs, and even though I find it strange for the media to invade their privacy at this point, I have the impression that they are happy. They've escaped a very dire situation."

'What will come next?'

Notwithstanding his relief to be in safe hands in Borken, however, Whalide did express misgivings about becoming isolated in his new community. 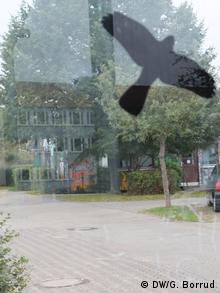 Only 107 of the 5,000 Syrians have passed through Friedland

The mayor of Borken, Rolf Lührman, told DW that his community would fulfill its duty by making their newest family feel welcome, pledging it was high on city hall's agenda.

"Of course, it would be great if this war weren't happening, and this family didn't have to seek refuge in our community," he said. "But it is our civic duty to comply with the federal government's decision to take in refugees. And I stand behind this decision."

It is this sense of civic duty that the German government is counting on to make this operation work, to alleviate the fears that Whalide and the hundreds of families like his will be carrying with them to Germany.

"I'm worried about what will happen," he said. "When we fled Aleppo to Beirut, we went to a place that was familiar. Now everything will be new, a new life… I'm grateful, but what will come next?"

*Whalide requested that DW not use his actual name in this article.

Around two million Syrians - 10 percent of the population - have fled their country. But they are not the only refugees. DW looks at what the UNHCR has called the "great tragedy of this century." (21.09.2013)