Helmut Kohl, the ′giant′, remembered at European memorial ceremony | Germany| News and in-depth reporting from Berlin and beyond | DW | 01.07.2017

Helmut Kohl wanted a European Germany, not a German Europe. It was a theme touched on by all the funeral orators at the memorial service for the former German chancellor. DW's Bernd Riegert reports from Strasbourg. At the end of her speech on Saturday, German Chancellor Angela Merkel bowed her head before the coffin of her predecessor in the plenary hall of the European Parliament in Strasbourg. She expressed reconciliation with her political mentor, praising him as a great European and "politician of world standing."

Read how the ceremony unfolded

"Without Helmut Kohl, the lives of millions of people who lived behind the Wall until 1990 would have been completely different - of course, my own as well. Dear Chancellor Kohl, you played a decisive role in the fact that I am standing here," Merkel said, her voice shaking slightly.

Merkel, who grew up in former East Germany, was appointed to Helmut Kohl's first cabinet after German reunification. She admitted that people, including herself, did sometimes have problems with Kohl's personality.

In 2000, after Kohl became embroiled in an illegal party funding scandal, she turned her back on her mentor, who has taken the names of secret donors with him to the grave. But she expressed the opinion that this would be a mere footnote in history, as the time shortly before and after the fall of the Berlin Wall, in the years 1989 and 1990, was decisive.

"This will always remain the unique, historic achievement of Helmut Kohl, one that towers above all else. Together with his partners, he integrated German reunification into European unification. A work of peace. A work of freedom and a work of unity," she said. 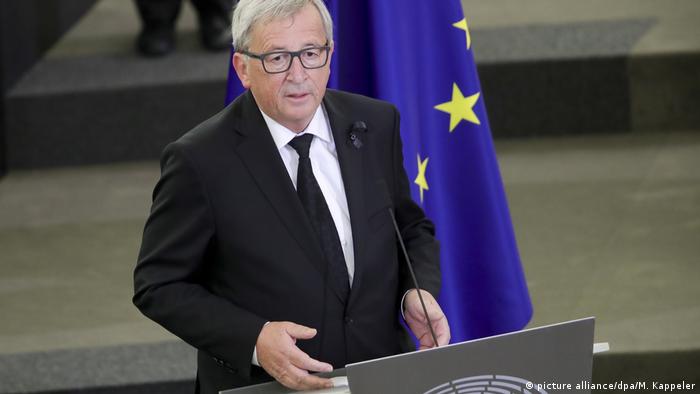 The speech by EU Commission President Jean-Claude Juncker was that of a personal friend, as well as of a politician

Merkel, who succeeded Kohl as the chair of the Christian Democratic Union (CDU), spoke as the last leader at the ceremony in Strasbourg on Saturday, the first-ever EU memorial of its kind. 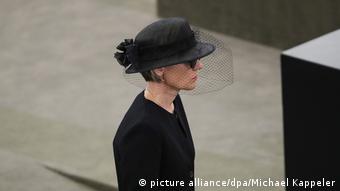 Kohl's widow was at the ceremony, but his sons from his first marriage did not attend

It's been said that Kohl's widow, Maike Kohl-Richter, wanted to prevent the current chancellor from speaking at the event. In front of the 800 mourners assembled in the plenary hall, however, Merkel turned to Kohl's widow and expressed her condolences.

But she also paid tribute to Kohl's first wife, Hannelore Kohl, who stood by him in his years as a politician before committing suicide in 2001.

Kohl-Richter followed the ceremony from behind her black veil and sunglasses, now and then dabbing a few tears from her eyes.

Before Merkel's speech, French President Emmanuel Macron made a promise to renew the Franco-German friendship in the spirit of Kohl. He said that together with Merkel, to whom he gave a friendly kiss in greeting, he wanted to give Europe new impetus. "The European spirit must not abandon us," he said, calling that "Kohl's message."

The president of the European Commission, Jean-Claude Juncker, bade a very personal farewell to a friend. Juncker said Kohl was the only government leader who teared up during a European summit. That was in Luxembourg in 1997, he said, when the EU decided to include central and eastern European countries and, at Kohl's insistence, made a united Europe possible.

"In Helmut Kohl, a giant of the post-war period has left us but already made it into the history books in his lifetime. He became a European monument before which Germans and Europeans lay wreaths, and, indeed, must lay wreaths," Juncker said. 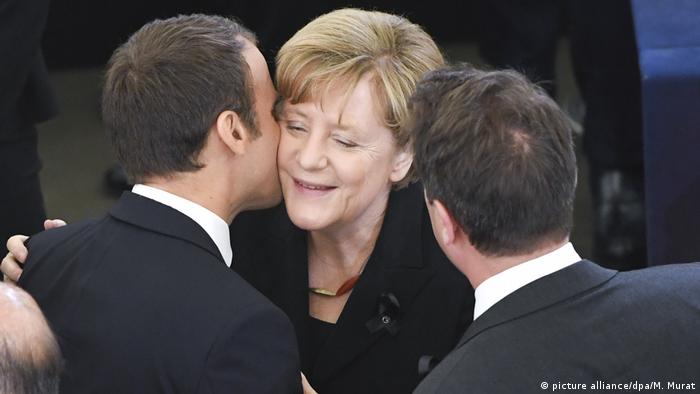 Kohl had accompanied him with great kindness for decades, Juncker said with profound gratitude. He described the former chancellor as both a German patriot and a European patriot, and said that Kohl had been quick to seize the opportunity for German unity offered by history.

"He sensed that unity was near. Others would have failed in the task," he said. Juncker used several languages to thank the former chancellor, who died two weeks ago at the age of 87. "Helmut, rest in peace, in eternal rest. You deserve it!"

Fourteen leaders of EU nations, the Federal Cabinet of Germany, the German president, numerous members of the European Parliament and members of the Bundestag were in Strasbourg to pay their last respects to Kohl. At his request, politicians such as former Spanish Prime Minister Felipe Gonzalez and former US President Bill Clinton also gave personal farewell messages.

In his partly humorous and partly reflective eulogy, Clinton recounted how Kohl served his official guests "Saumagen," a dish seldom found outside of southern Germany. "I loved him," said Clinton. "Hillary said I loved him because he was the only person with a bigger appetite for food than I have." 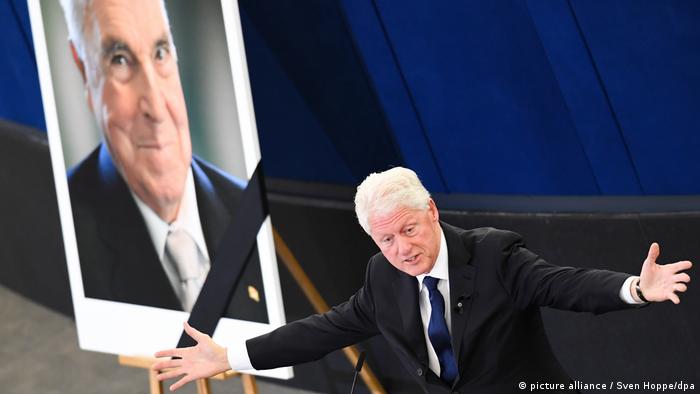 Clinton praised Kohl's ability to network and build ties. He did not build on divisions, but instead on unity, Clinton said, adding that today, the opposite trend could be seen in the world. The 70-year-old Clinton addressed the members of his generation and said, "All of us who came - why? Because Helmut Kohl gave us the chance to be involved in something bigger than ourselves, bigger than our terms of office, bigger than our fleeting careers."

Prime Minister Dmitry Medvedev attended the memorial in Strasbourg as representative for Russia. Mikhail Gorbachev, the former Soviet head of state who had actually been invited - and with whom Kohl had negotiated German reunification - declined the invitation for health reasons.

Medvedev praised Kohl, who helped Russia in hard economic times, as a true friend of Russia. "He was the architect of the world order," said Medvedev, adding that Kohl was aware that the division of Europe must be overcome. 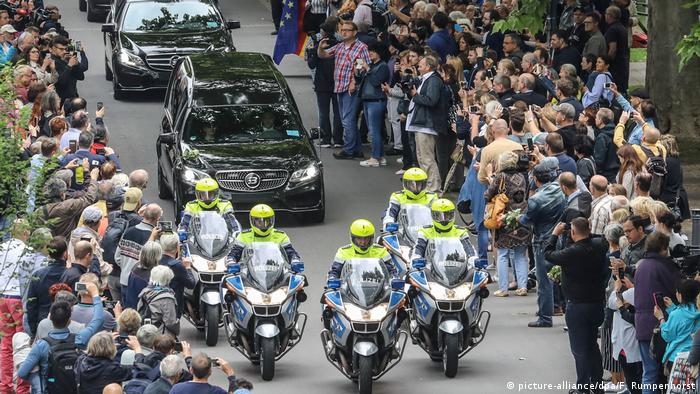 The funeral procession went through the streets of Ludwigshafen

Schulz: Kohl was a fighter

As a former president of the European Parliament, Martin Schulz was also in Strasbourg. The former European politician is now chairman of Germany's Social Democratic Party (SPD) and is in the midst of an election campaign for the German chancellery.

Schulz told DW what one could learn from Kohl as a campaigner: "He was a fighter, a real fighter. He always managed to mobilize his base." This was exactly what he himself also wanted to achieve, Schulz said. 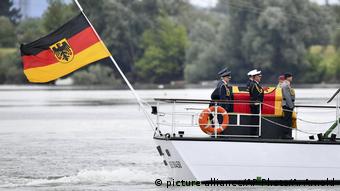 Kohl's coffin was taken on the Rhine to Speyer

Together, the funeral guests sang the German national anthem and listened to the anthem of Europe, performed by the orchestra of the University of Strasbourg. Then, the coffin with Kohl's mortal remains was carried out of the hall by German and French soldiers and flown to the southwestern German city of Ludwigshafen by the German Federal Police.

After a trip on the Rhine River, Kohl's remains were taken to Speyer, where 1,500 guests had the chance to pay their last respects at a service in the cathedral.

At the requiem mass, Bishop Karl-Heinz Wiesemann praised the former chancellor as a "truly great statesman." He said that the number of high-ranking guests demonstrated the "outstanding importance" of his achievements for both Germany and Europe. At the service in Speyer, Kohl's coffin was draped in a German flag; in Strasbourg, an EU flag was used. 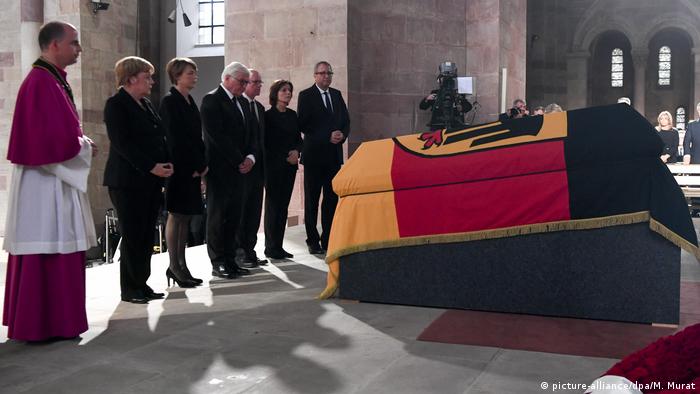 The ceremony in Speyer was attended by top-ranking German politicians

The Catholic service was also attended by numerous active and former heads of state and government, including Merkel and German President Frank-Walter Steinmeier. Kohl's widow sat between Juncker and Bill Clinton.

Kohl's remains were later interred in a ceremony for family and friends in the cemetery of the Speyer Cathedral.

Many words have been spoken and much ink has flowed on the subject of the former chancellor and his place in history. But where words fail, music begins. With what message? (01.07.2017)

Neither Helmut Kohl nor his widow wanted anything to do with a German state burial. This arrogant attitude reveals a unsettling insight into Kohl's view of his own role in the unification process, says Jens Thurau. (25.06.2017)