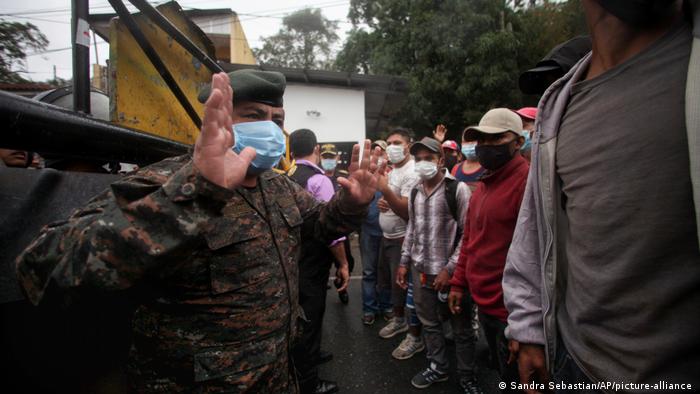 Guatemalan soldiers clashed with Honduran migrants walking together across the country on Saturday as part of their journey towards the United States.

Local troops, many wearing helmets and carrying shields and sticks, tried to block the migrants on a highway in Chiquimula, not far from the location they had entered the country.

Officials estimate between 7,000 and 9,000 migrants have crossed into the country since Friday, including many families and children.

In a video distributed by Guatemala's immigration agency, a few hundred people were seen scuffling with soldiers, and pushing back and running through their lines. Hundreds more were being held back by troops. Migrants managed to break past a police blockade in Vado Hondo, near Chiquimula in eastern Guatemala.

"The government of Guatemala regrets this violation of national sovereignty and calls on the governments of Central America to take measures to avoid putting their inhabitants at risk amid the health emergency due to the pandemic," said President Alejandro Giammattei.

It is the first such caravan of the year, heading to the US just days before President-elect Joe Biden is officially sworn in.

On Friday evening, an initial group of migrants had pushed their way past Guatemalan police in the border town of El Florido, 220 kilometers (137 miles) from Guatemala City.

The initial group of about 6,000 was joined in by about 3000 more, reported AFP news agency. The Guatemalan military detained some of the migrants on Friday. 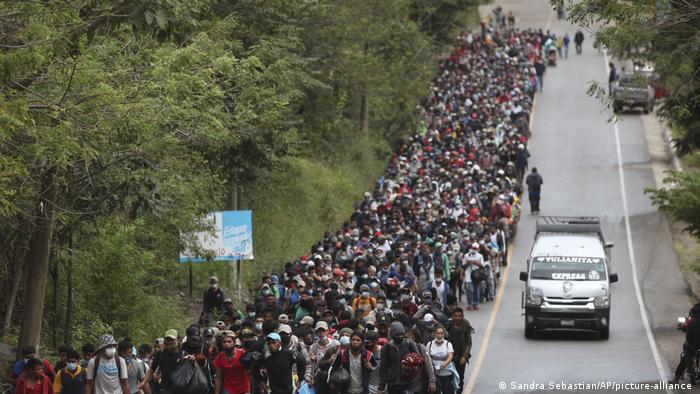 Migrants walk alongside a highway in Chiquimula, Guatemala

The migrants entered by pushing past around 2,000 border security forces. Many were unable to show the negative coronavirus test required to enter.

Some were provided assistance by the International Committee of the Red Cross and the UN High Commissioner for Refugees.

The Mexican government said it would not be allowing "illegal entry" of the migrants, and deployed 500 immigration officers to the border states of Chiapas and Tabasco.

The Honduran economy has been battered during the previous year, especially due to coronavirus-related lockdowns. Multiple hurricanes have also exacerbated problems such as poverty and unemployment.

"We have nothing to feed to our children, and thousands of us were left sleeping on the streets. This is why we make this decision, even though we know that the journey could cost us our lives," Maria Jesus Paz, who lost her home in the hurricanes, told Reuters news agency.

Many in the group are searching for a better life and hoping for more leniency under President-elect Biden, who has promised a more humane approach to immigration. His planned approach starkly contrasts with President Donald Trump's anti-immigration policies.

However, acting commissioner of US Customs and Border Protection Mark Morgan warned the caravan not to "waste their time and money." He said the change in administration will not impact the US commitment to the "rule of law and public health."

The US currently has an agreement with Honduras, Guatemala and Mexico to stop migrant flows.