On her way back to Sweden from a climate conference in Madrid, teenage activist Greta Thunberg encountered Germany's overcrowded trains. Twitter users commiserated with her. 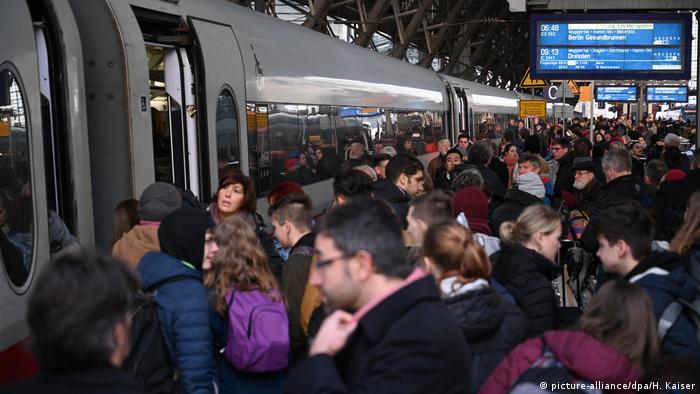 Climate activist Greta Thunberg found out on Saturday why so many travelers in Germany complain about the train service.

Thunberg tweeted a picture of herself sitting on the vestibule floor of what she described as an overcrowded Deutsche Bahn train on her way home to Sweden from the UN climate conference in Madrid.

In a country famous for punctuality and efficiency, Germany's rail operator, Deutsche Bahn, has a bad reputation for late, canceled and overcrowded trains.

The post was viewed thousands of times in a few hours, and disgruntled train travelers joined her in commiseration.

Thunberg has not been home in Sweden since August, and during that time she has crossed the Atlantic Ocean twice by sailboat and has refused to fly because of air travel's negative impact on the environment.

Deutsche Bahn thanked the young eco-warrior for supporting its battle against climate change and pointed out that the train she used had been running on 100% eco-friendly electricity.

A follow-up tweet hinted that Thunberg hadn't spent the entire train ride sitting on the floor.

Deutsche Bahn suggested to the child activist that "it would have been even nicer if you had also reported how friendly and competently our team served you at your seat in first class.''

Thunberg later replied that she wasn't knocking the train company, tweeting that sitting on the floor "is no problem of course and I never said it was. Overcrowded trains is a great sign because it means the demand for train travel is high!''

In 2019, Deutsche Bahn introduced a new online booking system that warns customers which trains are expected to be packed. However, the warning system has been criticized for its inaccuracy, with empty trains having been reported full and packed trains shown having vacant seats.

If punctuality is a German virtue, Deutsche Bahn seems to be showing a lack of character. In 2018, one in four trains run by Germany's state-owned rail operator was late. And it is costing the company dearly. (18.02.2019)