The rail system in Germany isn't perfect, but it definitely connects people throughout the country — not only geographically, but also as a topic of conversation familiar enough for everyone to join in on.

Even though my small hometown in Canada had a magnificent train station, passenger service sadly ceased as a result of the country's rail cutbacks in 1990. So nostalgia probably explains why I tend to fall in love with any country that allows people to reach its smallest village by rail.

I've spent nights in trains filled with sweaty and drunk passengers. I've been stuck for hours in the middle of nowhere on trains so rundown that mice felt at home running around my feet.

By contrast, German trains are generally decent and effective. I feel an high-speed ICE train beats long stretches of Autobahn anytime, and I have fond memories of a year of commuting with the regional train service.

Still, if there's one small-talk topic that unites everyone in the country, it's complaining about the Deutsche Bahn, the country's main railway company. The high cost of tickets, unexpected strikes, construction sites causing trains to be rerouted, and the fact that trains are not always on time are annoyances that anyone can relate.

These recurring delays do not reflect the stereotypical idea of German punctuality, as cartoonist Miguel Fernandez points out in one of his comics, part of DW's Euromaxx series That's so German. 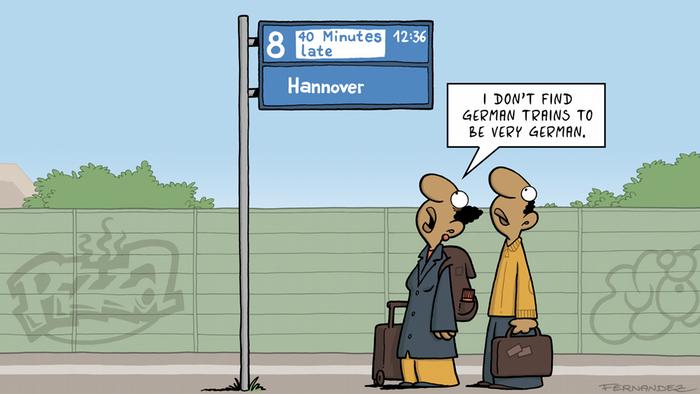 The problems aren't just something people are imagining. Germany's railway system urgently needs modernization but is underfunded. While Switzerland invested €362 ($410) per capita in 2017 in its rail system, Germany spent only €69 per inhabitant. Even without aspiring to reach Swiss standards, Germany is also behind Austria (€187), Sweden (€183) and the UK (€165), according to non-profit lobby group Allianz pro Schiene, which pushes for more train transport.

If you travel regularly by rail, you're bound to experience a few noteworthy situations of your own, from stressful delays to annoying seat neighbors.

Remember that time you were caught without a seat in an overloaded weekend train that constantly halted in the middle of nowhere without any explanation, the air conditioner wasn't working and it was the hottest day of the year, and another passenger felt it was the right moment to eat an onion, tuna fish and boiled egg sandwich right next to you while a group of drunk hooligans were getting ready for their football game with more alcohol, their unique sense of humor only partly covering up that spoiled child's constant screaming? You were so stressed about still possibly catching your connecting train that you forgot your laptop on board...

Of course we all remember. Of course we tell that story whenever the topic of traveling by train comes up.

If that kind of adventure hasn't happened to you yet, but you're in the mood for hours of conversation on a long train ride, just try saying that you think the German train system is one of the best in the world. It'll get everybody talking.

Passengers' rights - what you should know

Train cancelled? Flight delayed by three hours? That's annoying, but at least there's usually compensation. Do you know your rights? (22.03.2016)

Only 20 percent of Germany's high-speed trains are fully functional, and Deutsche Bahn's punctuality rate is far from ideal. This is according to internal documents from the state-owned train operator seen by ARD. (22.11.2018)