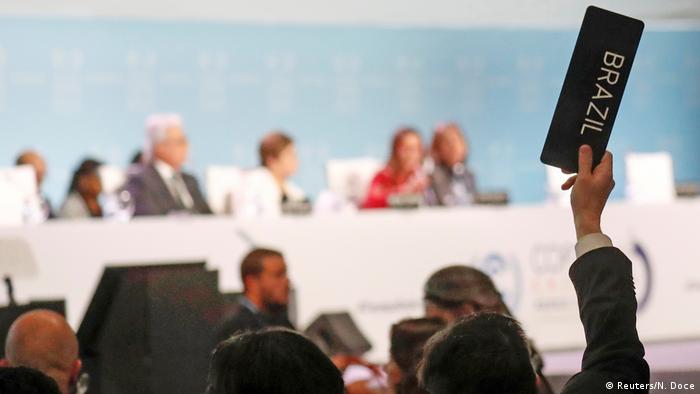 The COP 25 UN climate conference in Madrid remained deadlocked on Sunday, more than 40 hours after the two-week talks had been scheduled to end.

Negotiations to overcome several rifts over how to tackle the climate crisis — and who should pay for it — continued on Saturday and Sunday, amid concerns they may end in failure.

Several countries — wealthy, emerging and poor nations — objected to a draft final text unveiled by host Chile in a botched attempt to find common ground. Many of the delegates expressed disappointment over the objections put forward and the points that were dropped as the talks crawled towards a unified end.

Representatives from 200 nations have been meeting in the Spanish capital to finalize the rulebook for the 2015 Paris climate accord, which calls for limiting global temperature rises to "well below" 2 degrees Celsius. The talks were moved to Madrid because of ongoing unrest in the Latin American country.

Chilean officials presiding over this year's UN climate talks said Saturday they plan to propose a compromising strategy to end the deadlock on key issues.

"It's impossible to have a consensus outcome if you don't compromise,'' Chilean diplomat Andres Landerretche told reporters on Saturday.

Landerretche said they did not want to postpone some decisions until next year: "We don't foresee any suspension. We are working with a view toward finishing our work today.''

But observers said it would be difficult to overcome the obstacles.

"I've been attending these climate negotiations since they first started in 1991, but never have I seen the almost total disconnection we've seen here ... in Madrid between what the science requires and the people of the world demand, and what the climate negotiators are delivering,'' said Alden Meyer, a climate policy specialist at the Union of Concerned Scientists.

This month, the UN said that limiting global warming to 1.5 degrees Celsius required a drop in emissions of over 7% annually to 2030. Scientists have warned that the window to prevent the Earth's climate hitting irreversible tipping points is fast closing.

Nations have still not agreed how to fund climate change measures or what rules will govern international cooperation, with deep disagreements emerging between rich polluters and developing nations.

"We have made it very far, but the question of how to develop an international C02 market is very complicated," German Environment Minister Svenja Schulze told DW.

Others, however, rejected the notion that substantial progress had been made during negotiations in Madrid.

Fridays for Future activist Greta Thunberg denounced world leaders for the lack of progress at the COP 25 talks.

"We make sure to put them against the wall and that they have to do their job and protect our future," Thunberg said from the Italian city of Turin, where she was continuing to lead weekly school strikes.

Richer polluters such as the United States, India, China and Saudi Arabia have backed measures that simply repeat the language in the 2015 Paris accord.

But more than 80 poor and climate-vulnerable nations, backed by the EU, have insisted on going further.

"[We] will not walk away without a clear call for all countries to enhance their ambitions," said Marshall Islands climate envoy Tina Stege.

The Association of Small Island States coalition blasted Australia, the US, Canada, Russia, India, China and Brazil for "a lack of ambition that also undermines ours."

Nations are also split over "loss and damage," compensation for countries already suffering from the climate emergency.

The United States, which plans to exit the Paris agreement, has worked to block any provisions that might hold it and other developed countries responsible for climate change-related damages, which could total more than $150 billion per year by 2025, observers and diplomats have said.

The EU boosted the talks on Friday by pledging to make the bloc carbon-neutral by 2050, despite the refusal of Poland, one of the bloc's major emitters. But the European Commission stopped short of agreeing to reduce emissions by 55% or more by 2030.

"I'm very happy that we could reach this common goal that Europe will become climate neutral by 2050," Marin told DW.

Marin hoped Poland would eventually "be on board" with the idea.

"We have all agreed that Europe will become climate neutral by 2050. It's now about … how different member states implement this. This discussion will continue next spring," she said.

"A teenager working on her anger management problem," reads Thunberg's Twitter profile. This is not the first time the US president has attacked the teen on social media. (12.12.2019)