COP25: Who are the biggest climate winners and losers? | Environment | All topics from climate change to conservation | DW | 10.12.2019 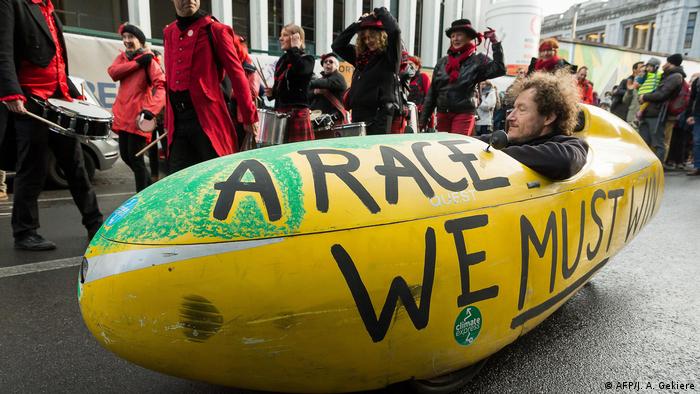 A ranking of the world's most emission-intensive economies indicates who is working hardest to protect the climate. But the biggest takeaway from the new study is that there are no gold medals to be given out for in the race to cut emissions; not as long as the competitors universally fail to match the Paris Agreement goal of keeping global heating well below 2 degrees.

Scientists agree that by the end of this century, our planet will be at least three degrees hotter than it was before the industrial revolution -- unless we can drastically, and rapidly, cut manmade CO2 output. So far, there's little sign of that happening, according to the index published by today by NewClimate Institute, Germanwatch and Climate Action Network.

"Traditionally, the Climate Protection Index leaves the first three places open," Niklas Höhne, one of the reports' authors, told DW. "And they are open again this year, because no country has done enough to meet the climate accord."

The study analyzed and compared the progress toward the 2 degree goal in 57 countries, plus the European Union as a bloc. Together, these nations are responsible for over 90% of global greenhouse gas emissions.

They were ranked on four areas: Greenhouse gas emissions, share of energy generated by renewables, energy consumption per capita, and current and climate policy.

With no country deemed worthy of gold, silver or bronze, Sweden took fourth place. The Nordic country scored well on policy, with its target of a 100% renewable energy supply by 2040, and the world's highest carbon tax at 114 euros per metric ton. By comparison, Germany is planning to introduce a tax of 10 euros on a ton of carbon in 2021.

Behind Sweden, Denmark and Morocco came in fifth and sixth. Germany lagged behind in 23rd place. Europe's biggest climate loser, meanwhile, was Poland, in 50th place. China climbed the rankings compared to last year, but is still in the bottom half of the table, in 30th place. 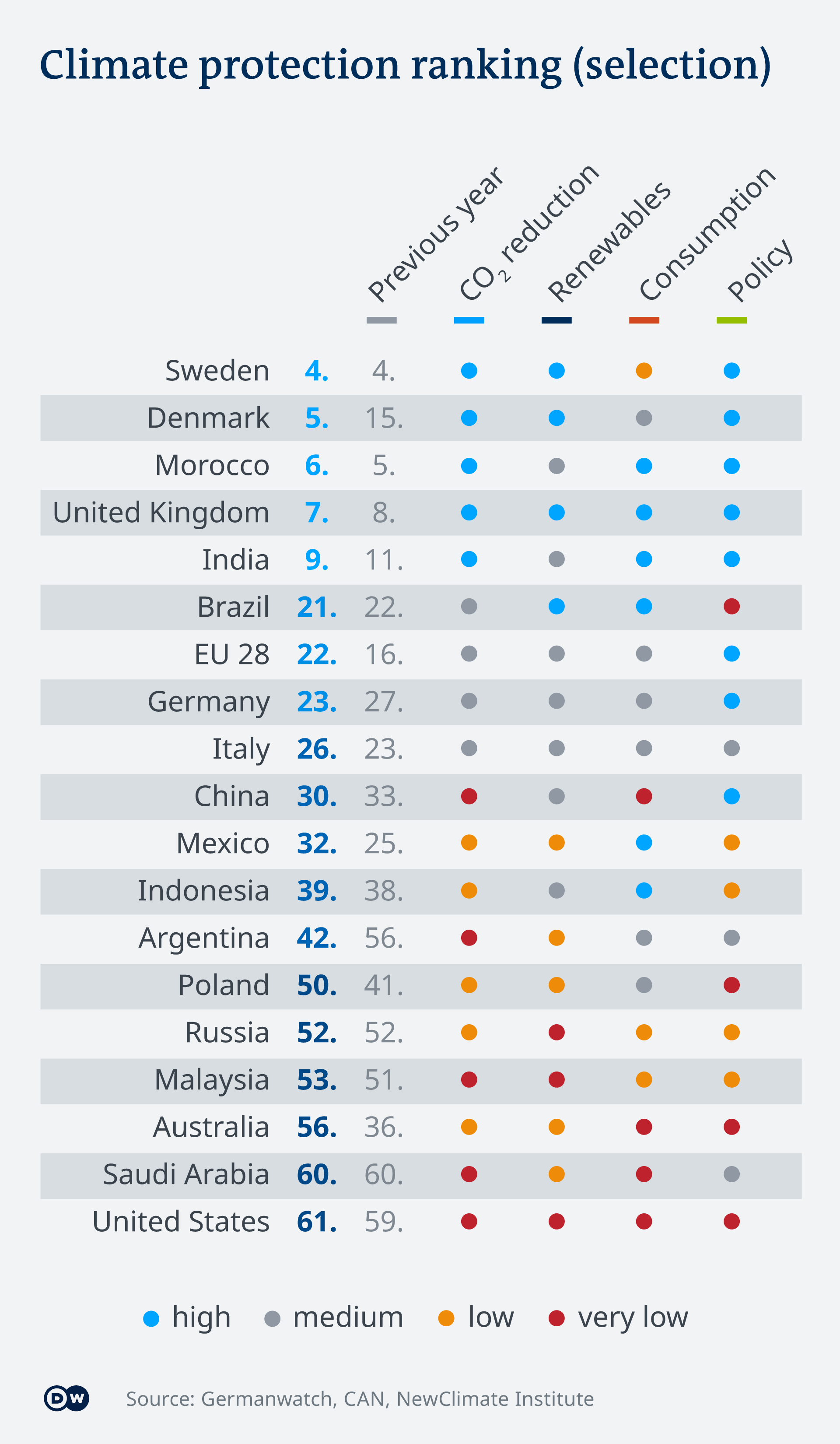 If there was a second division for climate action, the United States would be relegated before its feet touched the ground. Already way down the league in 2018, this year it hit the very bottom of the table. "Climate policy there is going backward," Höhne said. Under President Donald Trump, many environmental regulations have been scrapped and the country is set to pull out of the Paris Agreement next year.

The US also uses more than twice as much energy per person as the EU, and 10 times more than India. "That is not a good situation," Höhne said.

A soft turn in the right direction

Overall emissions were falling in more than half the states ranked, "particularly the smaller-industrial and developing countries," Ursula Hagen, another of the report's authors, told DW. "That's a positive aspect and gives up hope of a turnaround."

"We see subtle moves in the right direction,"Höhne said. But the world's biggest industrial nations, the G20, "are unfortunately still performing really poorly. More than half the G20 are in the bottom half of the index."

Just behind its Nordic neighbor, runner up Denmark is a small country that scored big on climate policy. It aims to cut 70% of its CO2 emissions by 2030, by which time it plans to have phased out coal.

Morocco also impressed the researchers. As early as 2015, it became one of the few countries worldwide to begin cutting subsidies to fossil energy providers, the study says. It also gained points for low energy use and development of renewable energy, which is earmarked to supply 52% of demand by 2030.

From India to Brazil

This year, India ranked in the top 10 for the first time, getting high marks for comparatively low per capita energy use and -- unlike the US and Europe -- low greenhouse gas emissions. India has also invested heavily in renewables, which should provide 40% of its energy by 2030. "I find that extremely impressive for a country at that level of development,” Höhne said." 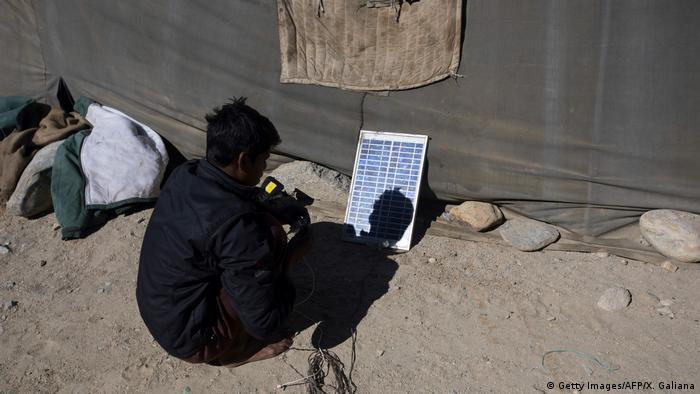 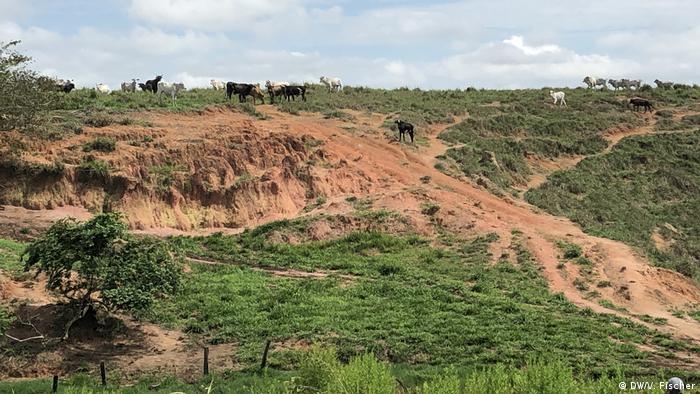 Brazil was criticized for deforestation rates in the Amazon rainforest

Points were taken off, however, for India's plans to build new coal-fired power plants to meet some of the rest of its growing energy demand.

"As far as I'm concerned, the international community is responsible for helping India to prevent this and shift to alternative energy sources instead," Höhne added.

With more than 70% of power coming from hydro, Brazil was world leader in this area. However, it ranked in the bottom 10 for climate policy.  "Experts are concerned about deforestation rates, the highest in the last decade, and extensive forest fires in the Amazon, while the government under president Bolsonaro cut the environment agency budget for fire prevention," the report says. And the researchers could see no significant plans to cut Brazil's long-term emissions.

Europe and German need to get serious

The report welcomed the new European Commission President, Ursula von der Leyen's calls for the EU to raise 2030 emissions reduction targets from 40% to 55%.

"These targets are the reason we have given the EU a good rating on climate policy," Ursula Hagen said. "As with the goal of being climate-neutral by 2050, this must now be filled out with concrete measures. So far there is little to no actual strategy." 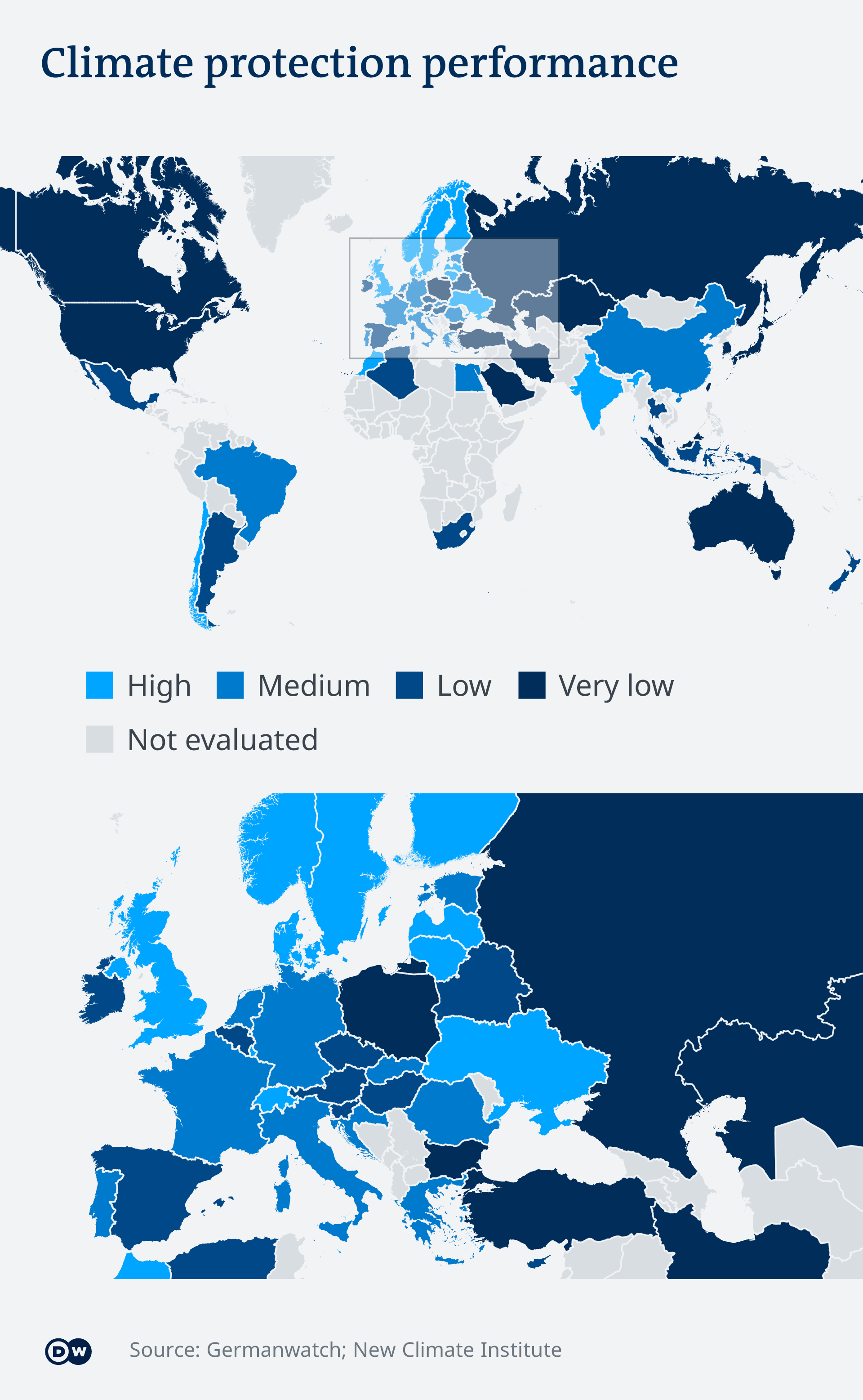 At present, the EU is not on track to reach the Paris climate targets.

Neither is Germany, whose climate policy Hagen describes as "lackluster" and "incompatible" with the Paris Agreement.

Höhne described the country's recently adopted climate policy package as "a step in the right direction, but far too small," adding that the country needed "a clear commitment to climate neutrality." Until then, it will languish in the middle of the index, a long way from taking one of the empty spots on the winner's podium.